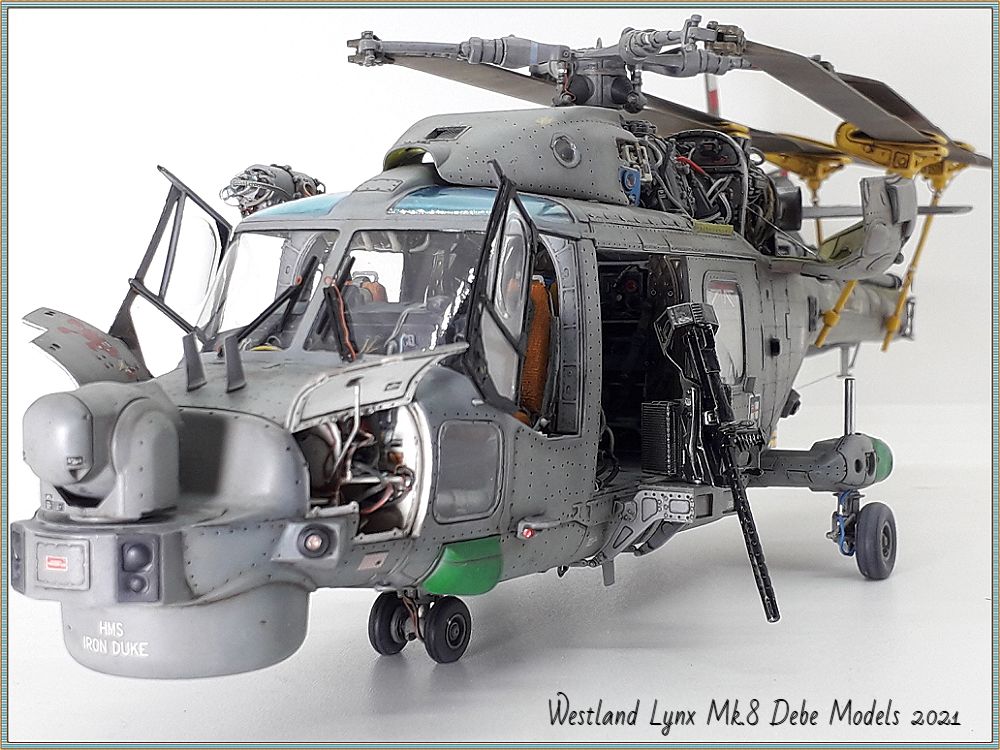 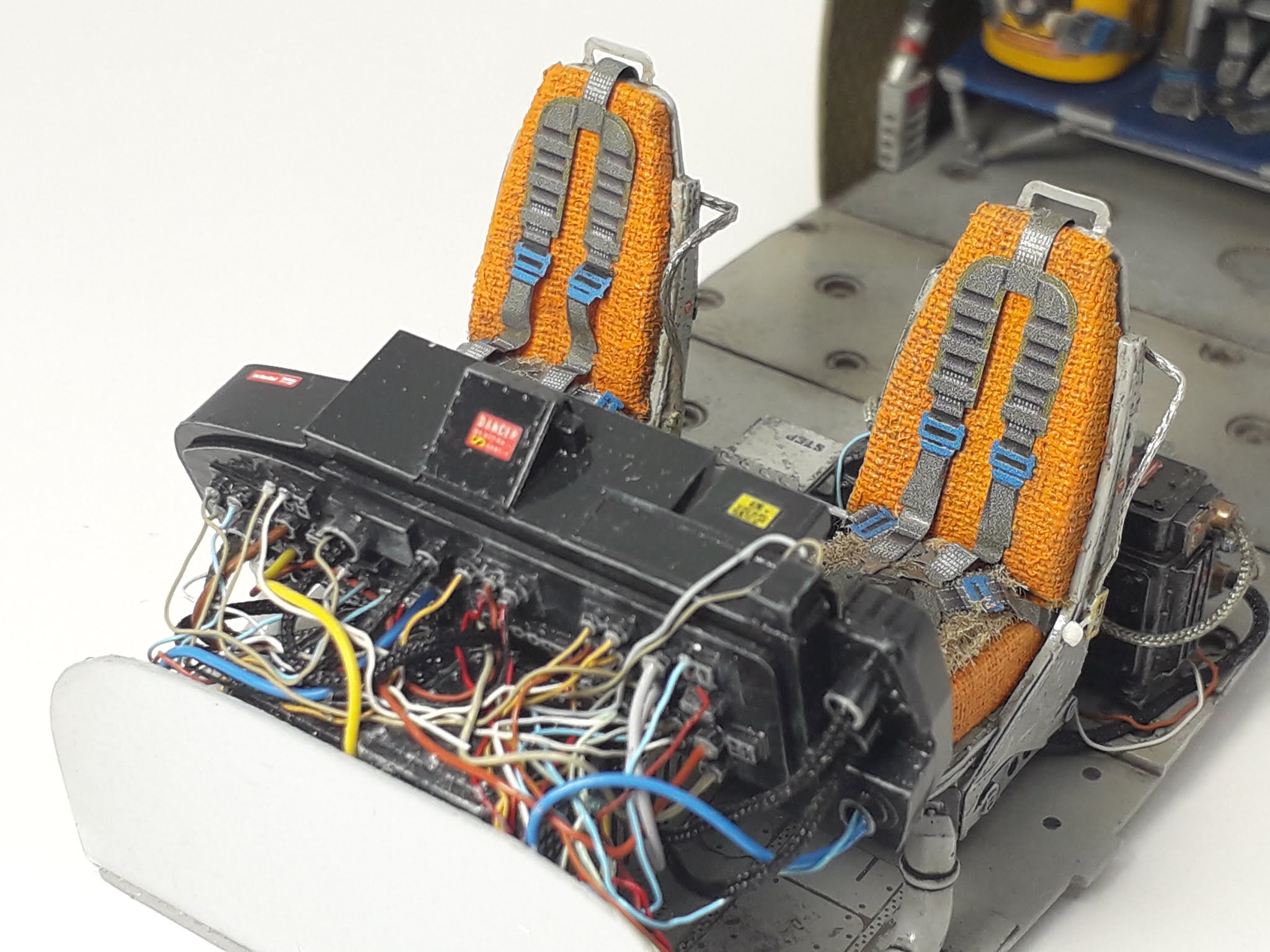 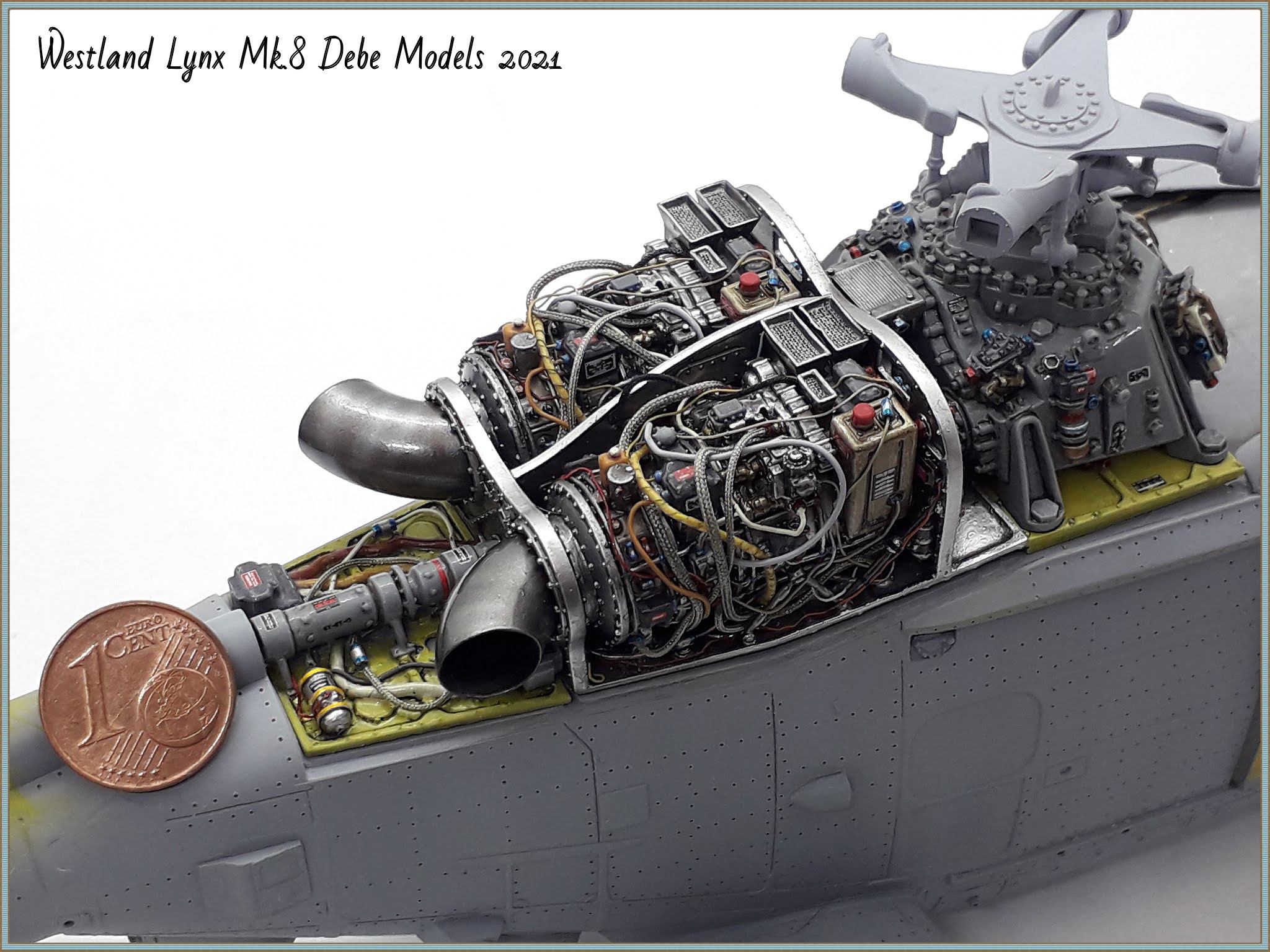 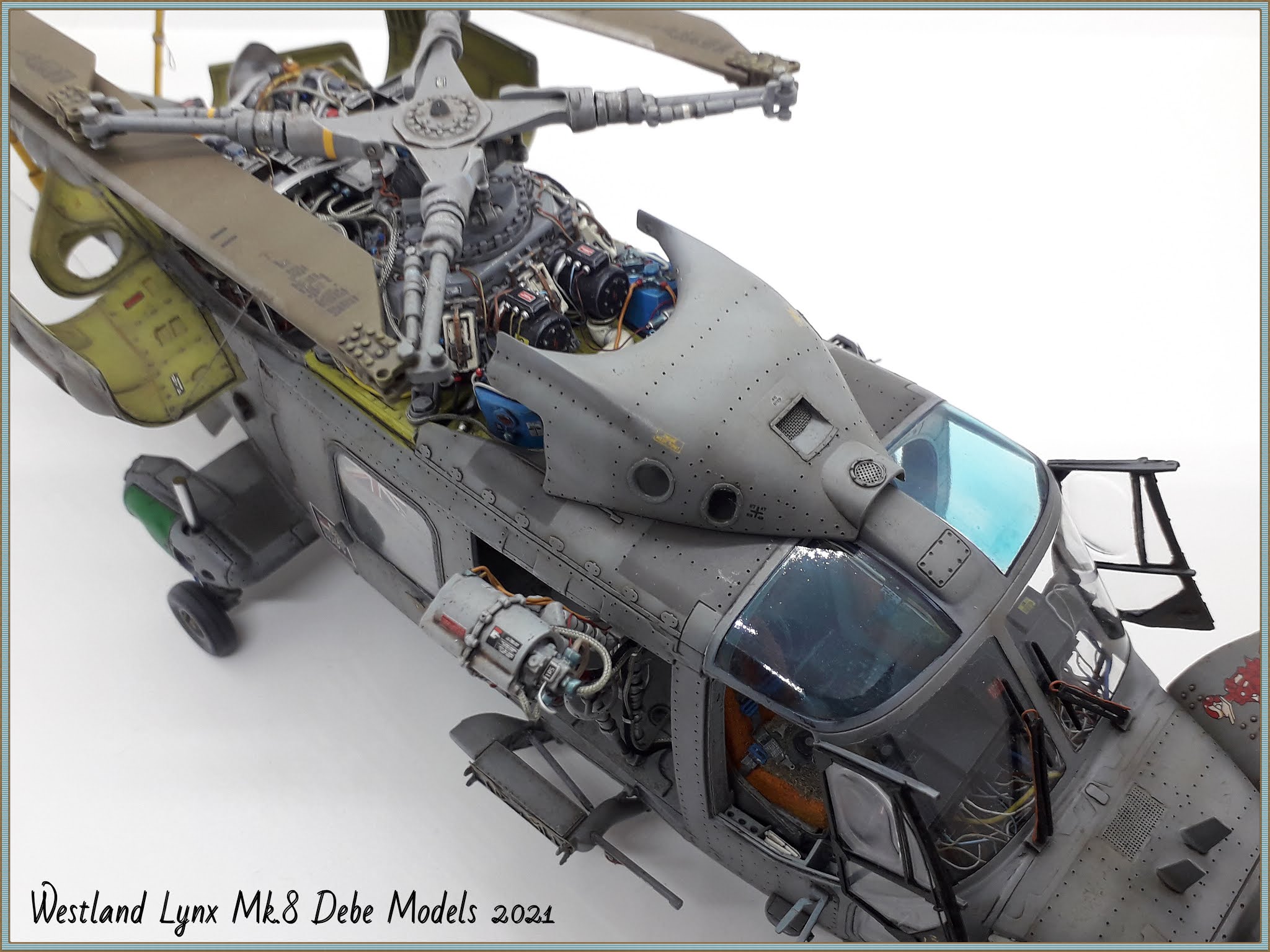 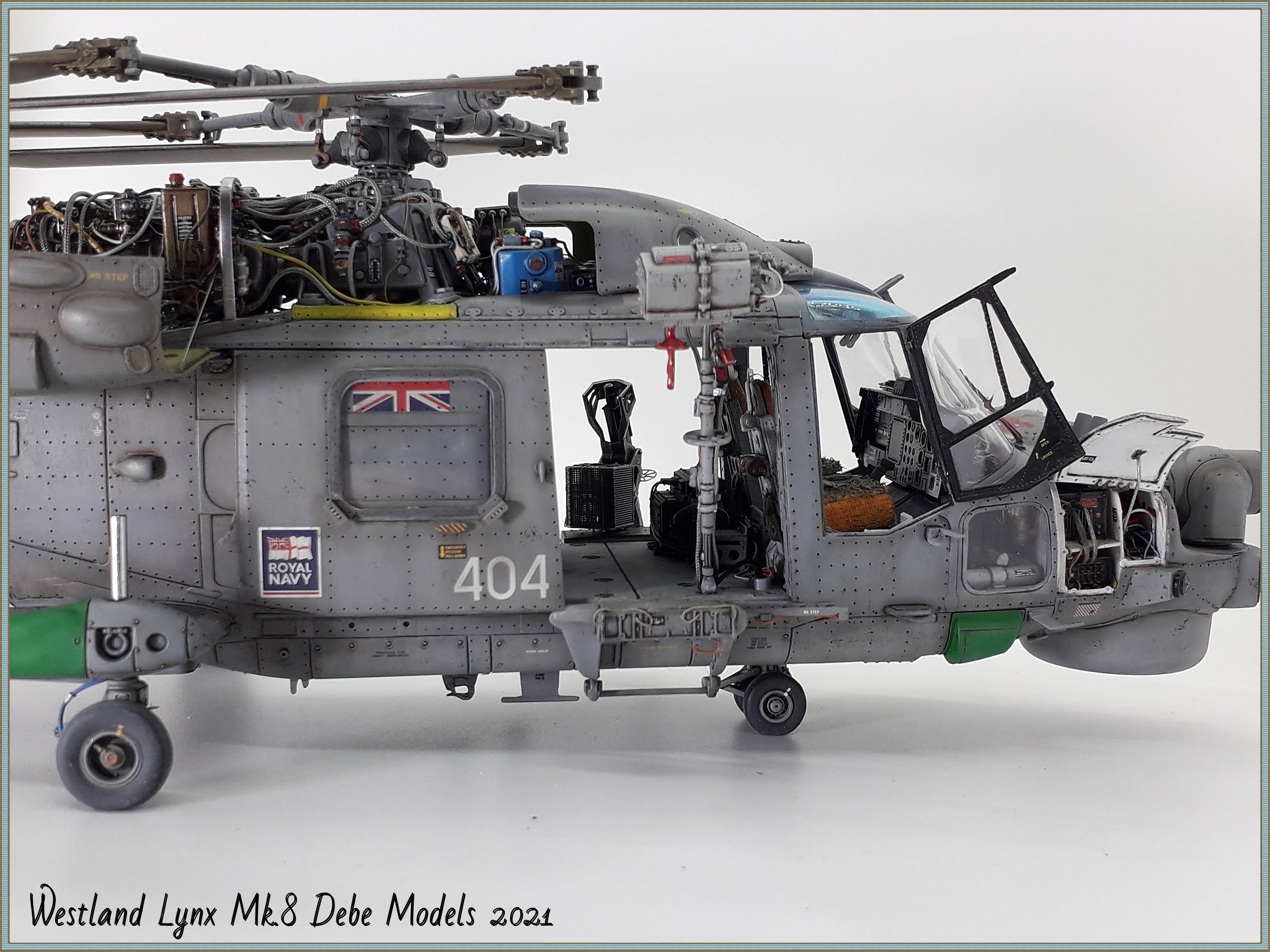 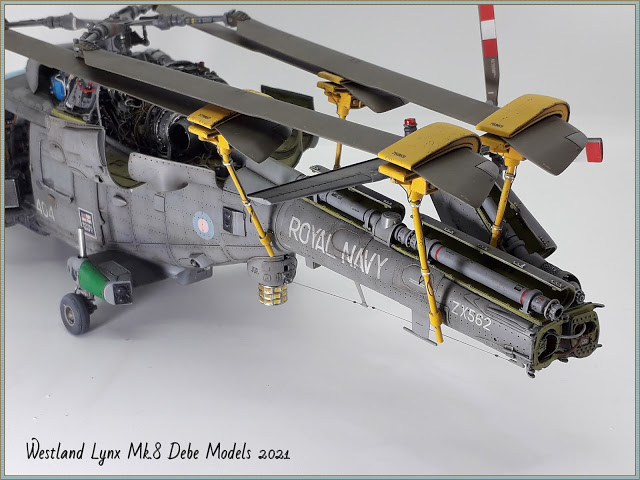 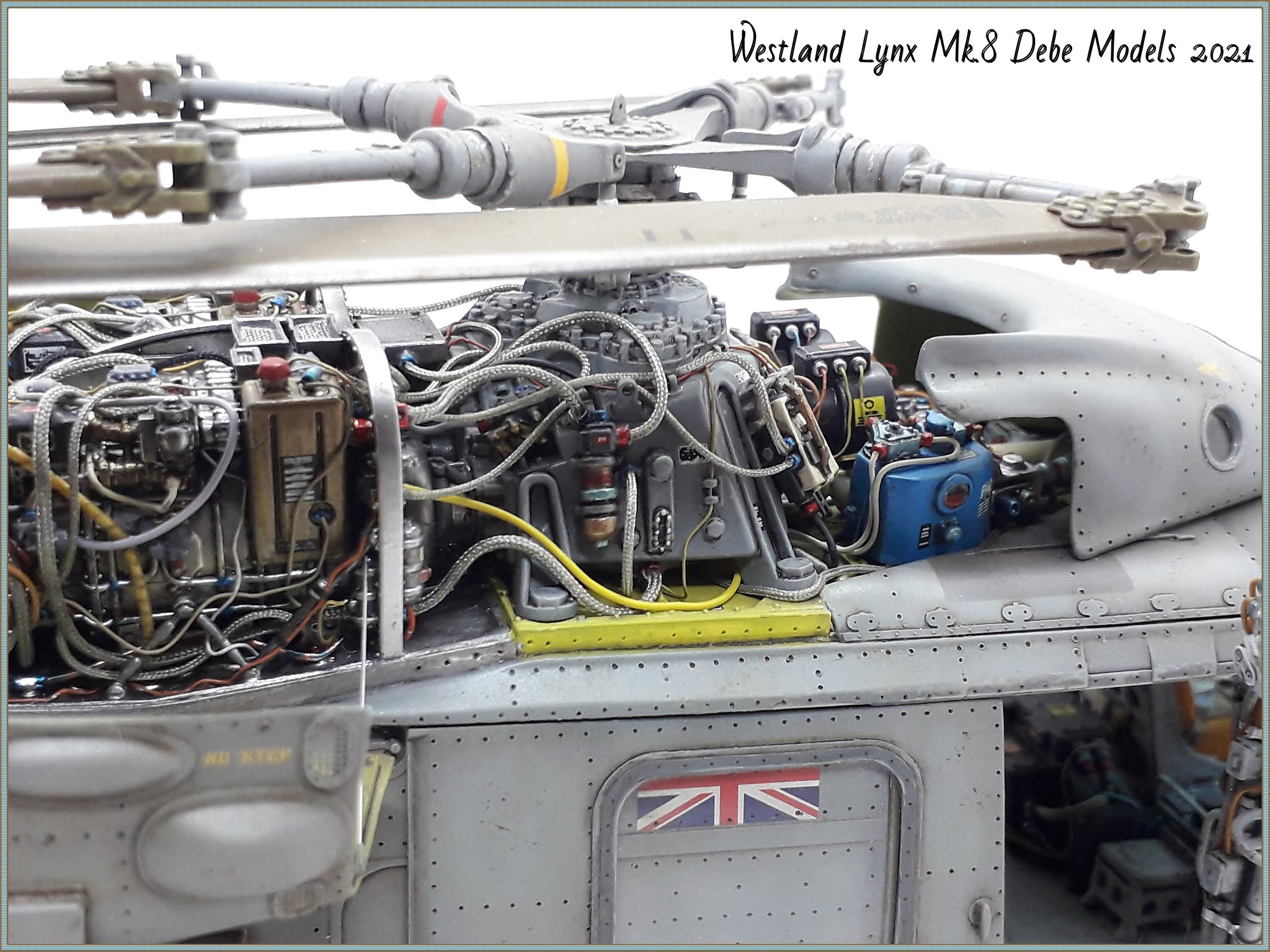 The Westland Lynx Mk 8 is the “SuperLynx 100” upgraded version of the HAS Mk3 naval variant. The new model features enhanced Rolls Royce GEM 42-200 powertrains, main rotor blades made of composite material and numerous improved electronic equipment. It is equipped with FLIR in the turret above the nose, with radar moved to the radome under the nose.
As armament this version includes a Browning M2 .50 caliber, Sea Skua anti-ship missile and Stingray torpedoes.

The kit was marketed in 2018 with the addition of specific parts compared to the initial 2012 edition (Sea Lynx Mk88A). There are no photoetched parts. The detail is generally of good quality with nice sharp details and an already very pleasant interior if you do not want to use aftermarket. The transparencies are also well made and fit quite well. A very negative note, on the other hand, concerns the riveting that Revell has almost completely omitted. The original helicopter is full of very visible rivets scattered everywhere as is typical of these aircraft. The kit offers some timid hints (under the belly of the helicopter and therefore in an invisible area) with some positive rivets but very little. The tail is supplied separate from the spar so that it can be installed folded (typical position of naval helicopters at rest). The armament also comes complete with Browning, Sea Skua and Stingray.

The first part of the work obviously concerns the cockpit and the rear compartment. The naval versions of the Lynx provide that the controls are not double but only on the right side of the pilot. So yoke and cyclic on the observer’s side do not have to be installed. I used Eduard photo etchings and designed and molded in resin the parts needed to further detail the cockpit. In this case I made the air conditioning system, some tiny electrical boxes, various electrical boxes, the back of the control panel to be subsequently wired, the electrical receiver positioned behind the navigator’s seat, the lifeboat, document holder and radio equipment (located behind the rear seats) For the design I used the Fusion 360 cad program and the pieces were printed with a small Elegoo Mars 2 Pro in liquid resin.

Revell does not foresee the possibility (in any of its Lynx), to leave the motors (however absent in the package) and the other mechanical parts in view. It only provides a gearbox (among other things quite nice only in the upper part) which, however, cannot be used if you decide to represent the mechanics discovered, as it is too coarse and not designed for this purpose. At the time of the realization of this work (started in September 2020) there was nothing on the market that could be used. So I decided to completely design the whole part with a 3d CAD program (Fusion 360 Free version) and to print the project with a small non-professional liquid resin printer (Elegoo Mars 2 Pro) wather-washable.
It was necessary to find on the net and in a good book dedicated to this version, all the news and photographs necessary to be able to replicate the two engines and all the rest as faithfully as possible. Unfortunately, I did not find drawings that would have simplified the design phase a lot. The first step is to detect the overall dimensions and therefore the available spaces that the kit offers. In fact, the starting point can only be to understand how much space is available. Once I cut all the pieces from the main fairing (not too long work because luckily Revell supplies the engine hatches and exhausts separated and with the correct shapes) I found all the useful dimensions to start my project. The original helicopter (and the kit correctly) shows a staggered support surface connected by an inclined surface. This complicated the calculations a lot and I had to do tests after tests before having my starting point. Also to detect the shapes I used the original pieces of the kit. In the end, the only original parts used are the turbine exhaust pipes and the rotor head. By measuring the surfaces, you can begin to draw a 3D shape that will enclose all the useful spaces. From this moment, knowing what the maximum measurements are, I began to develop a draft turbine based on photos of the original engine. Obviously you have to make some compromises, one of which is the limit and tolerance of the printer with which the piece will then be made. For this kind of thing it is mandatory to use a resin printer. Filament machines absolutely do not allow acceptable detail. With the resin printer, on the other hand, it is possible to create objects under 0.5 mm (half a millimeter). So, for example, it is possible to obtain hexagonal bolts with a diameter of 0.3 mm (even if it will not be possible to distinguish their shape with the naked eye). Under the turbine embryo. The 3d cad program, being parametric, allows you to correct the inserted measurements at any time, thus modifying in turn the solid consideration. For example, by modifying the entered value of any section of the turbine (which is a circular element), the corresponding change on the 3d model is obtained. So in the end you can make all the necessary changes at any time if you realize, for example, that you go beyond the available spaces.