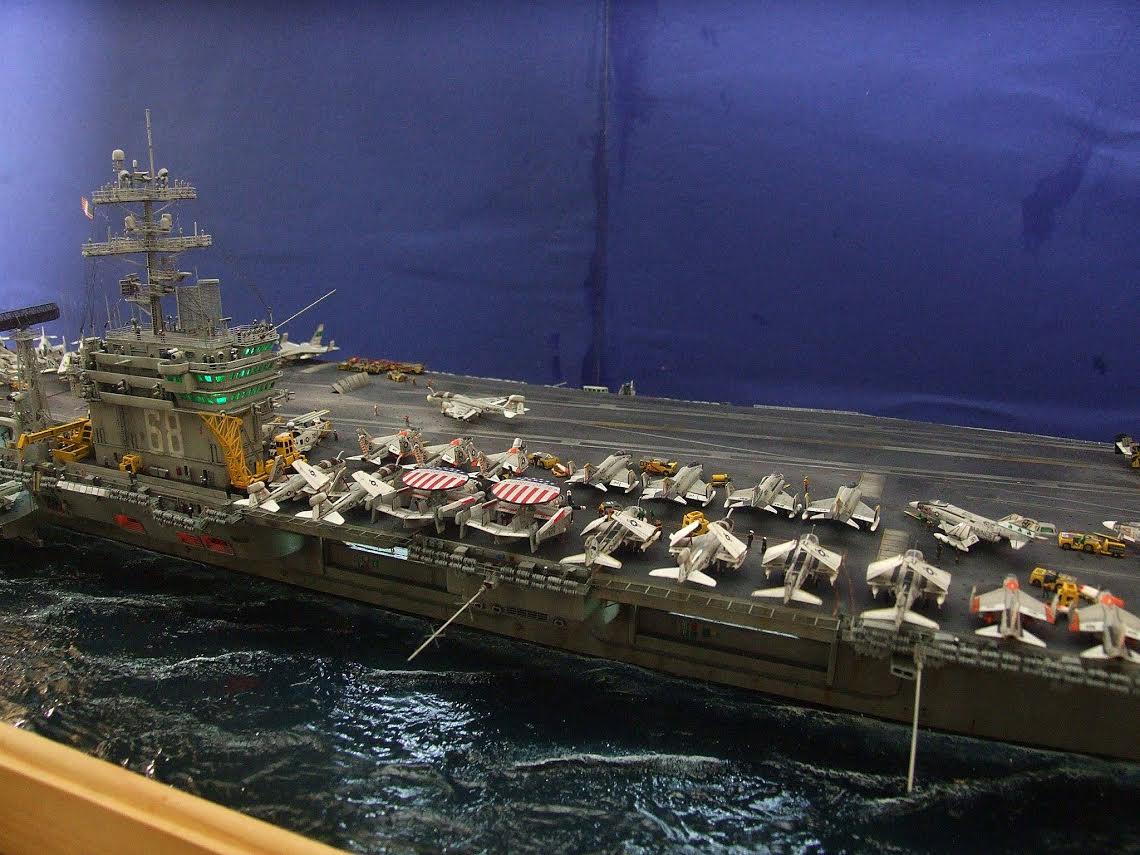 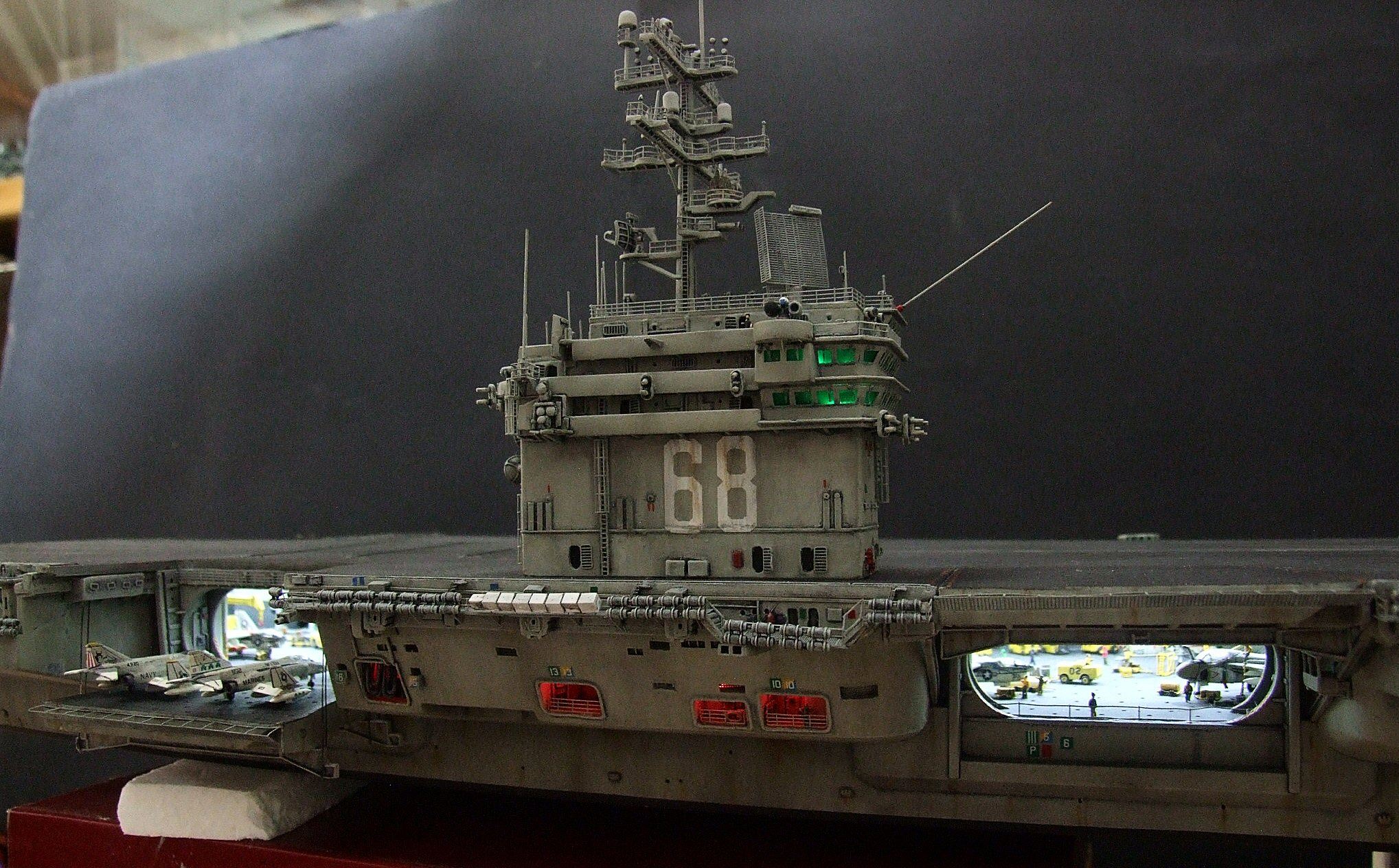 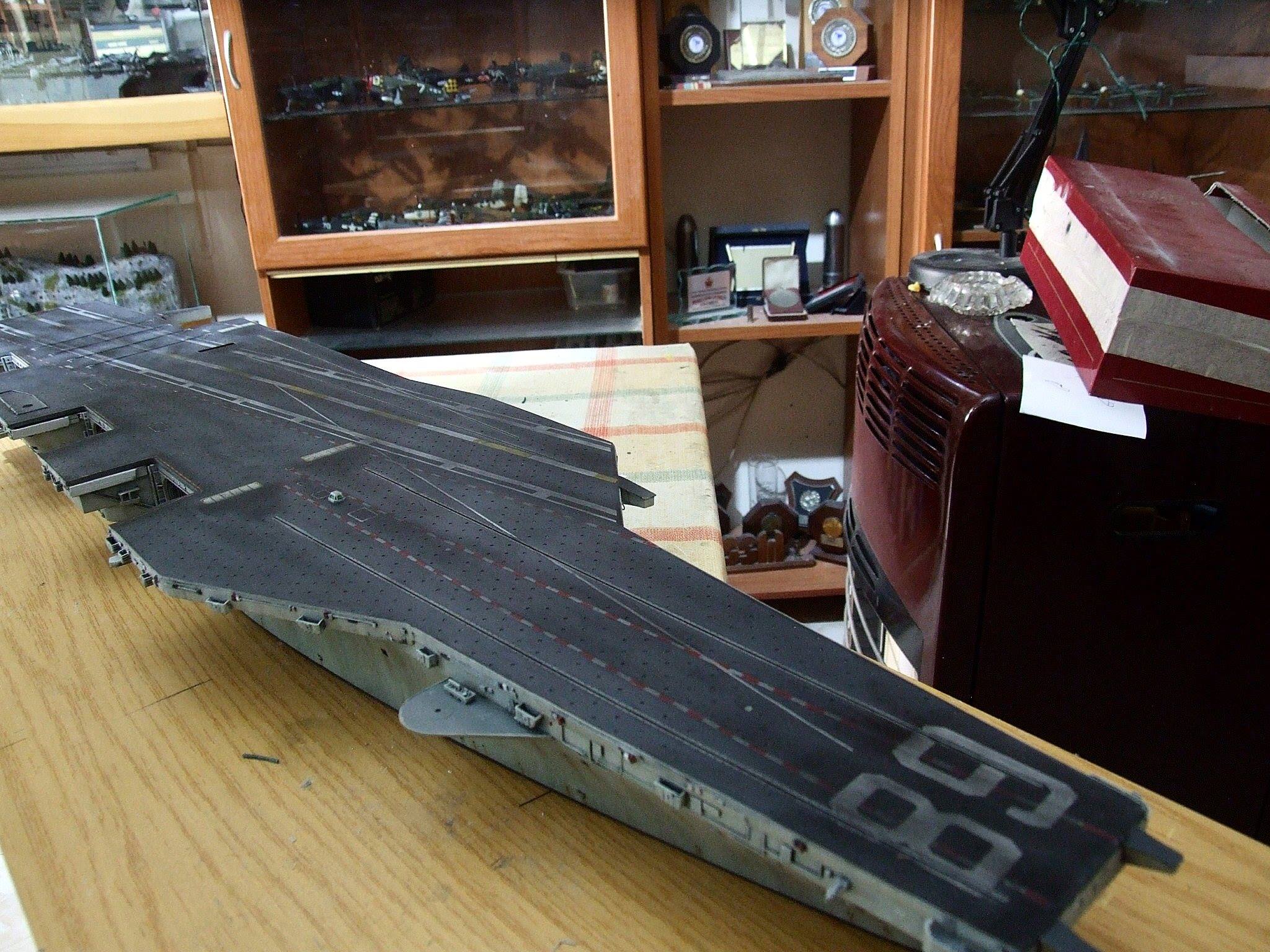 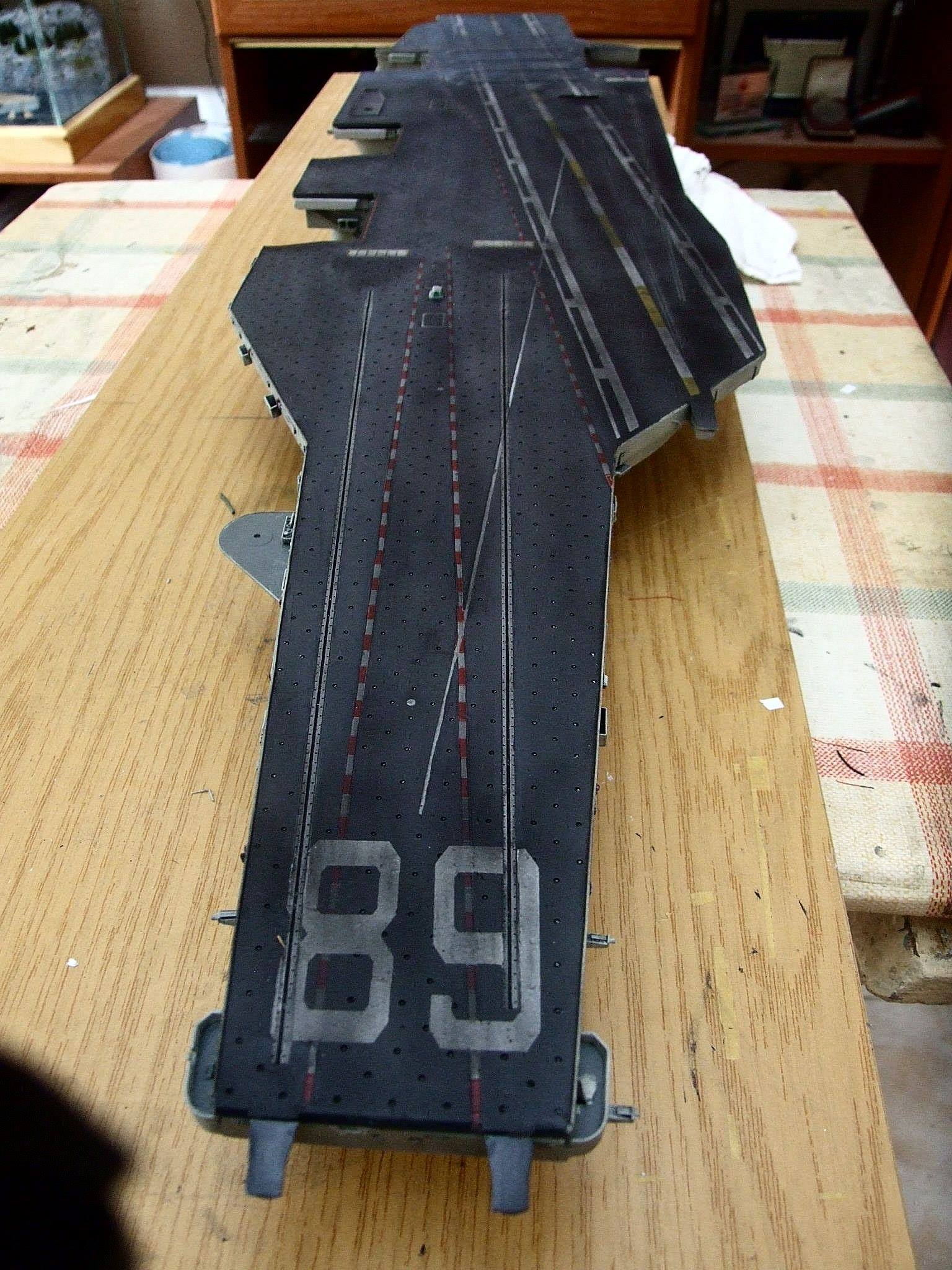 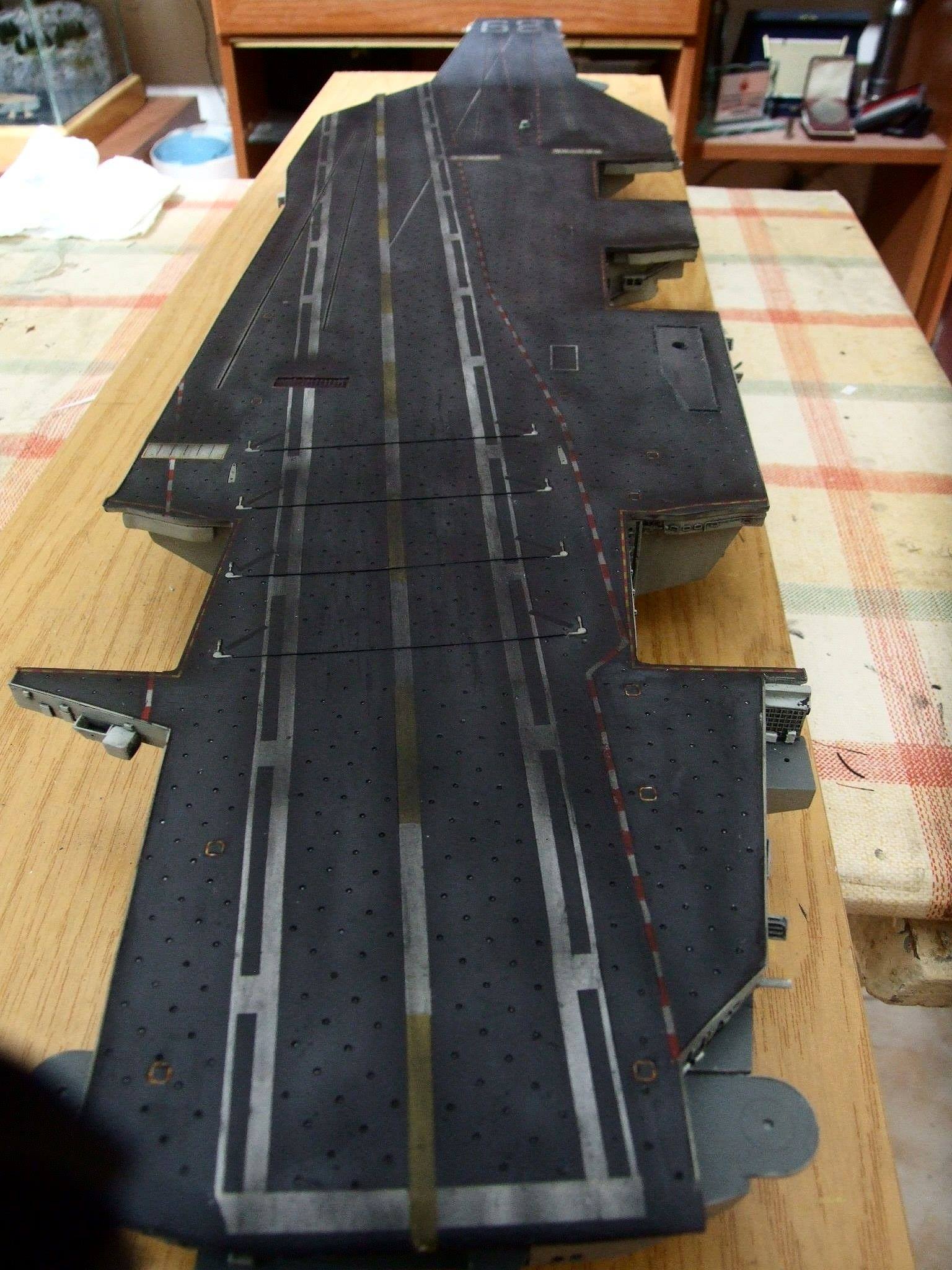 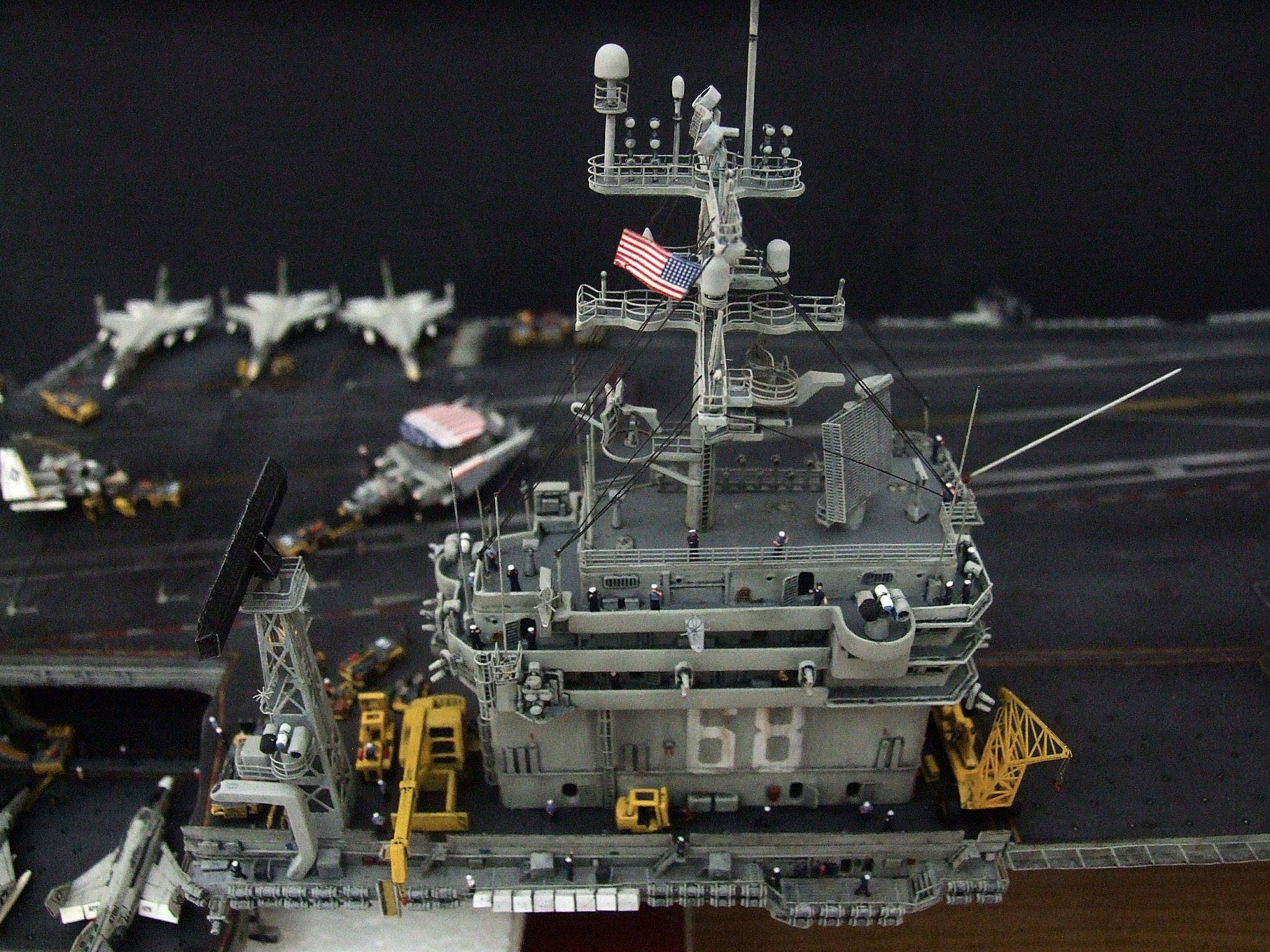 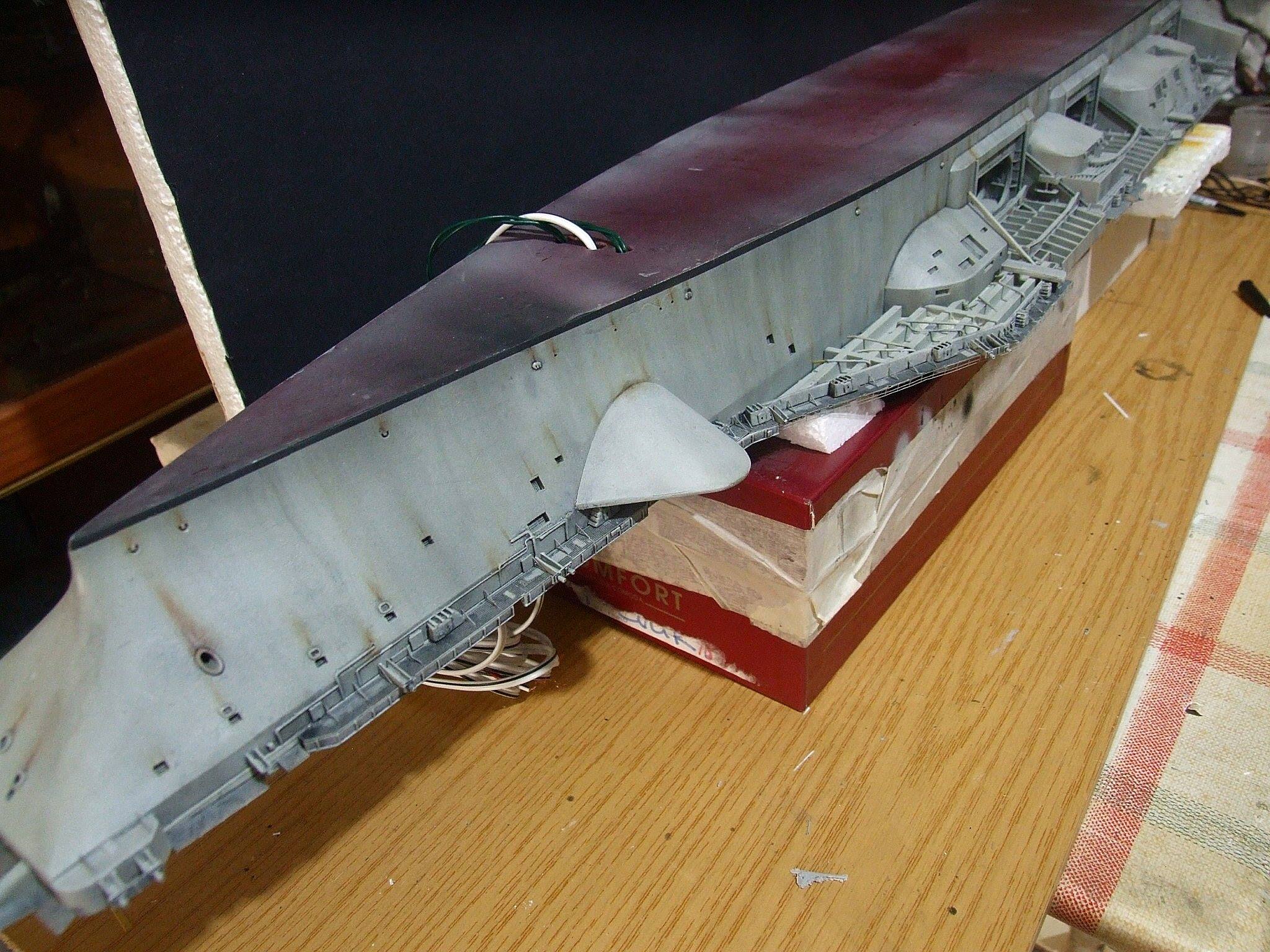 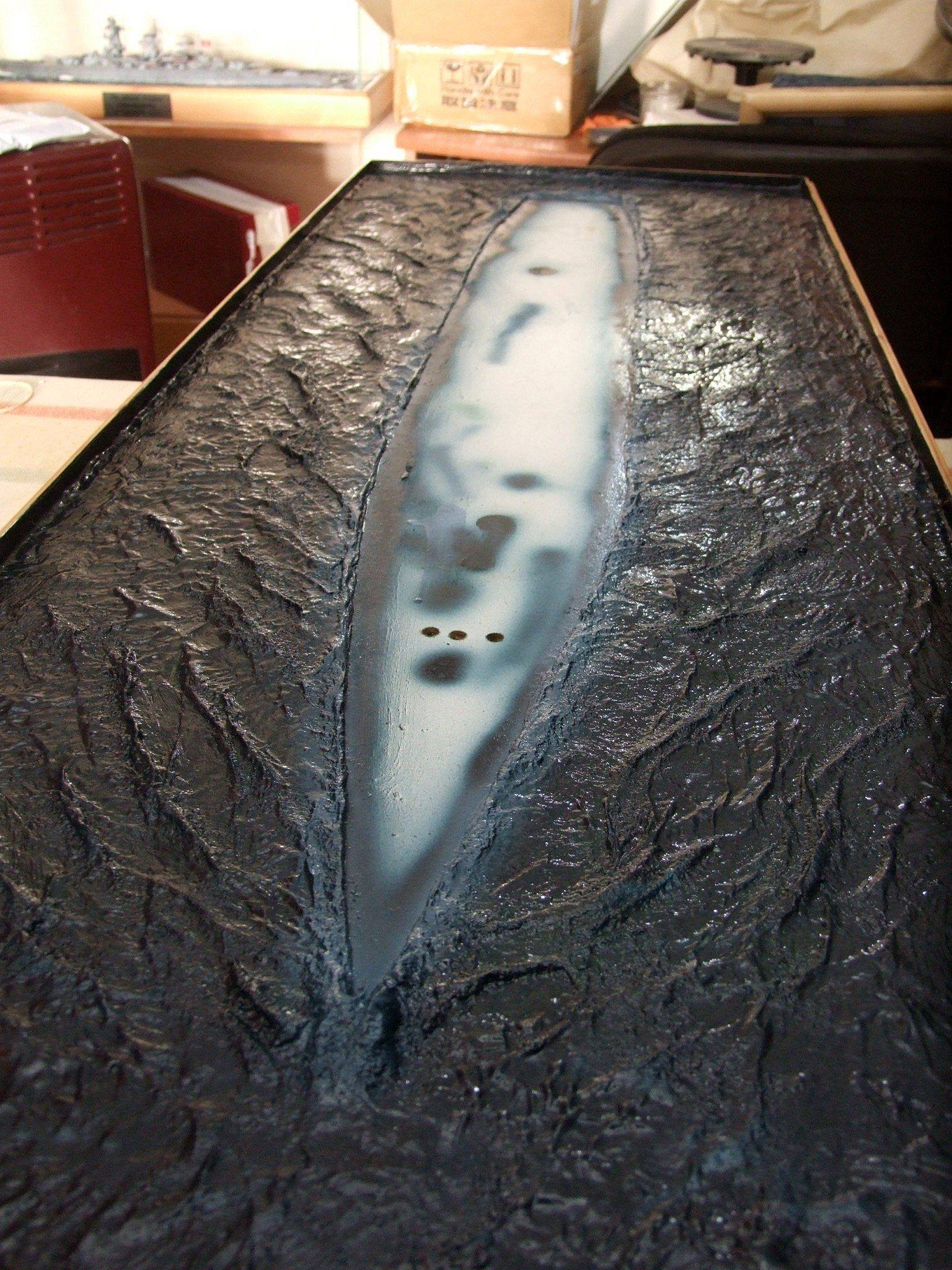 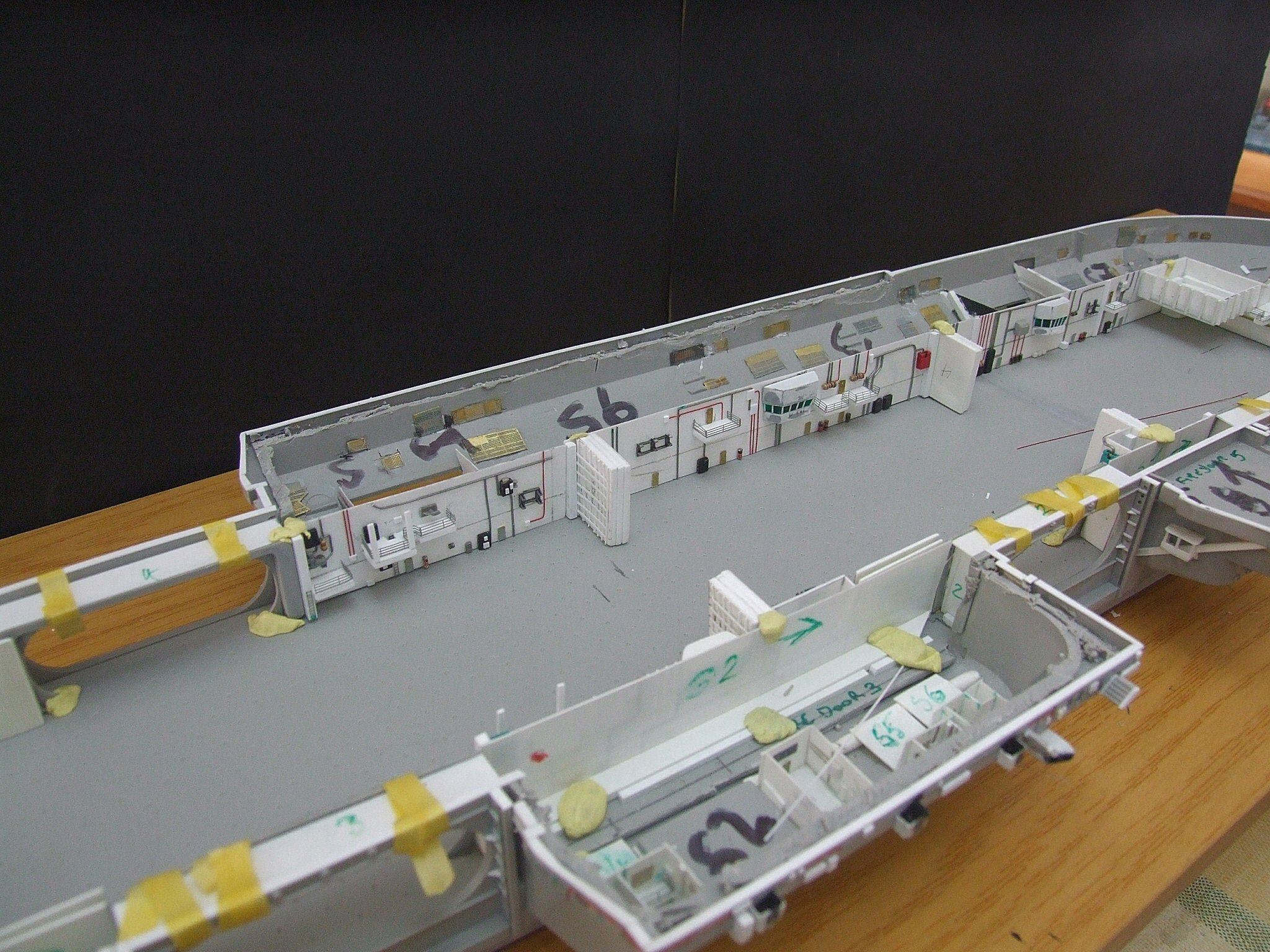 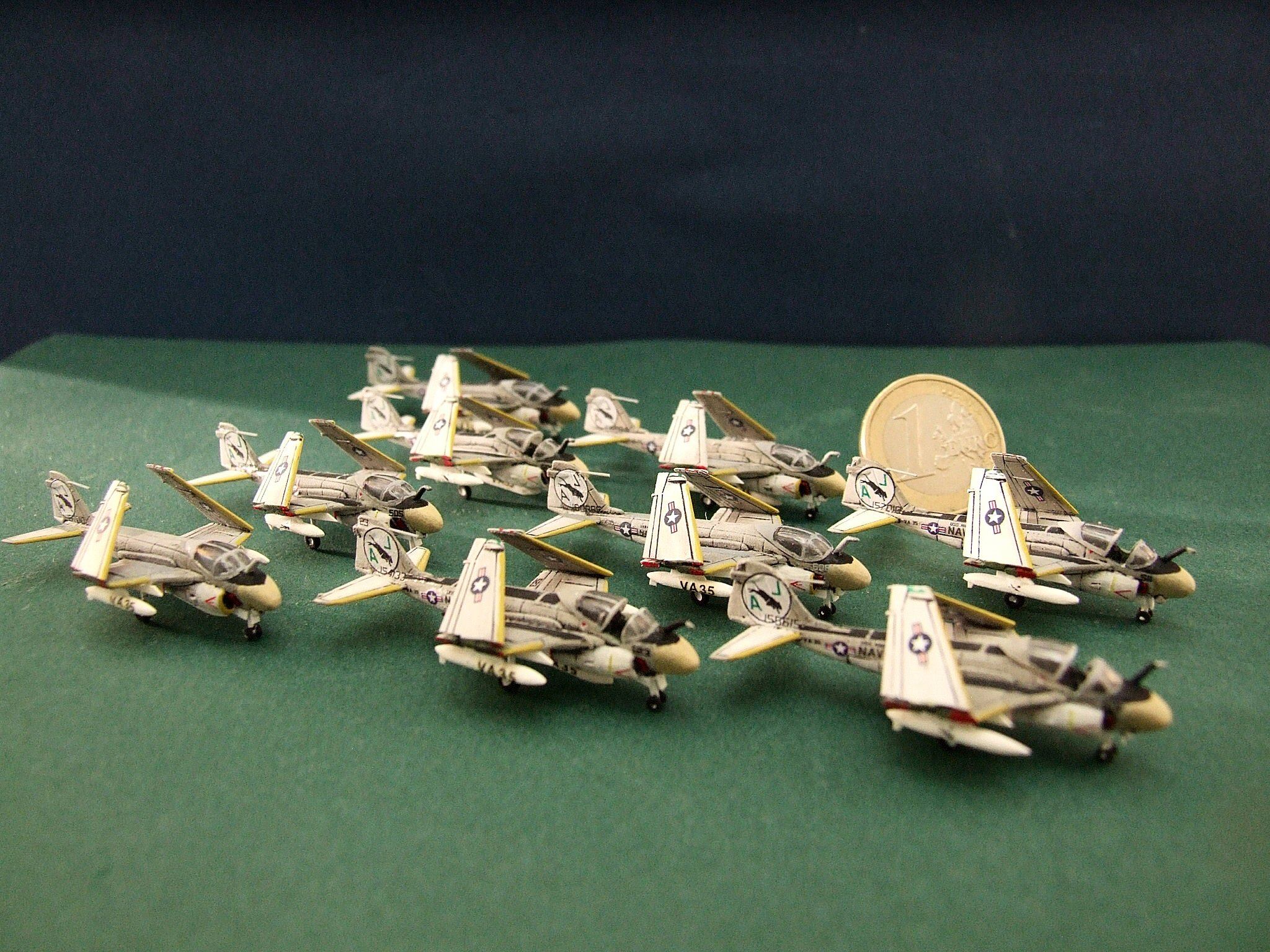 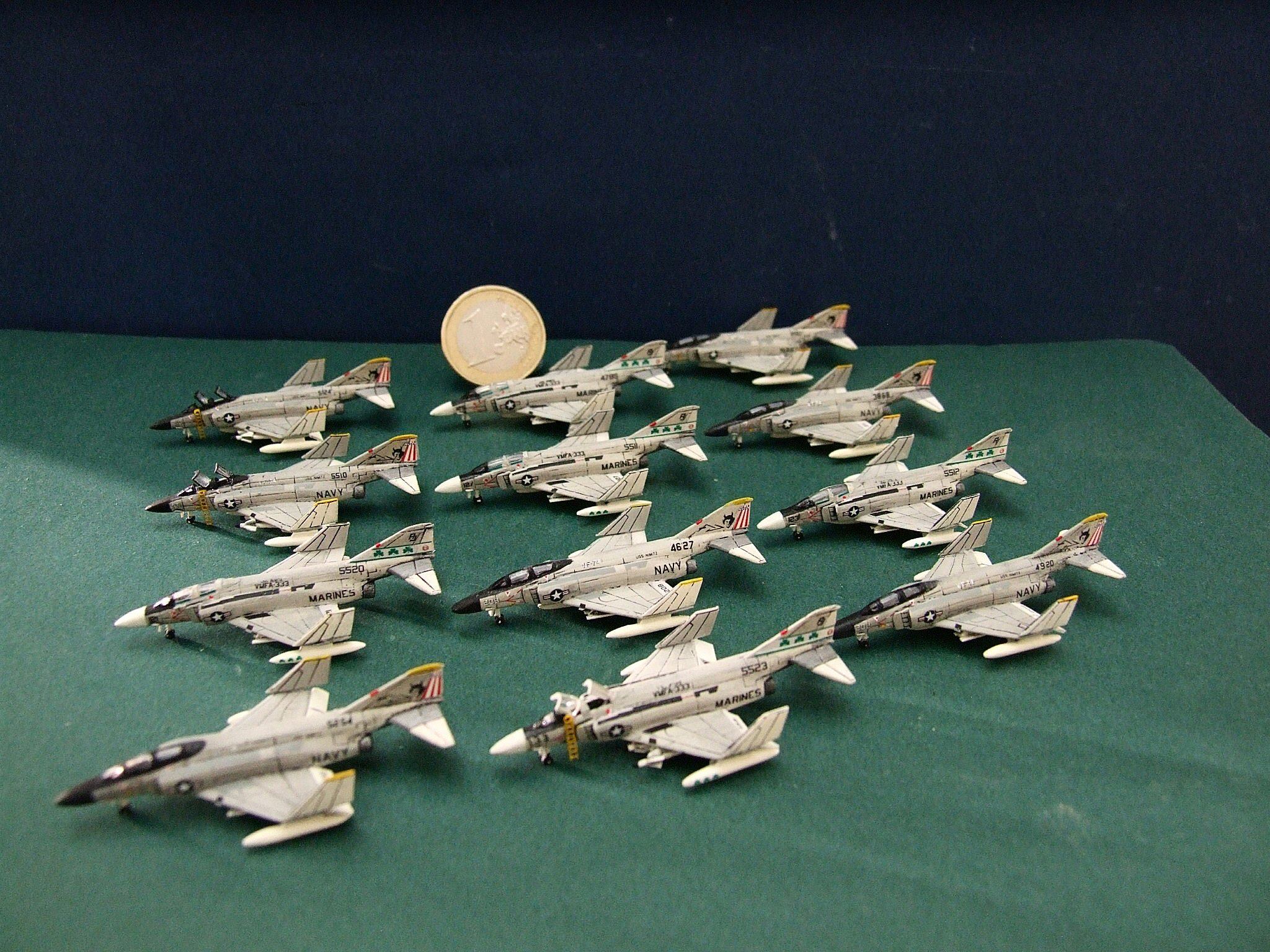 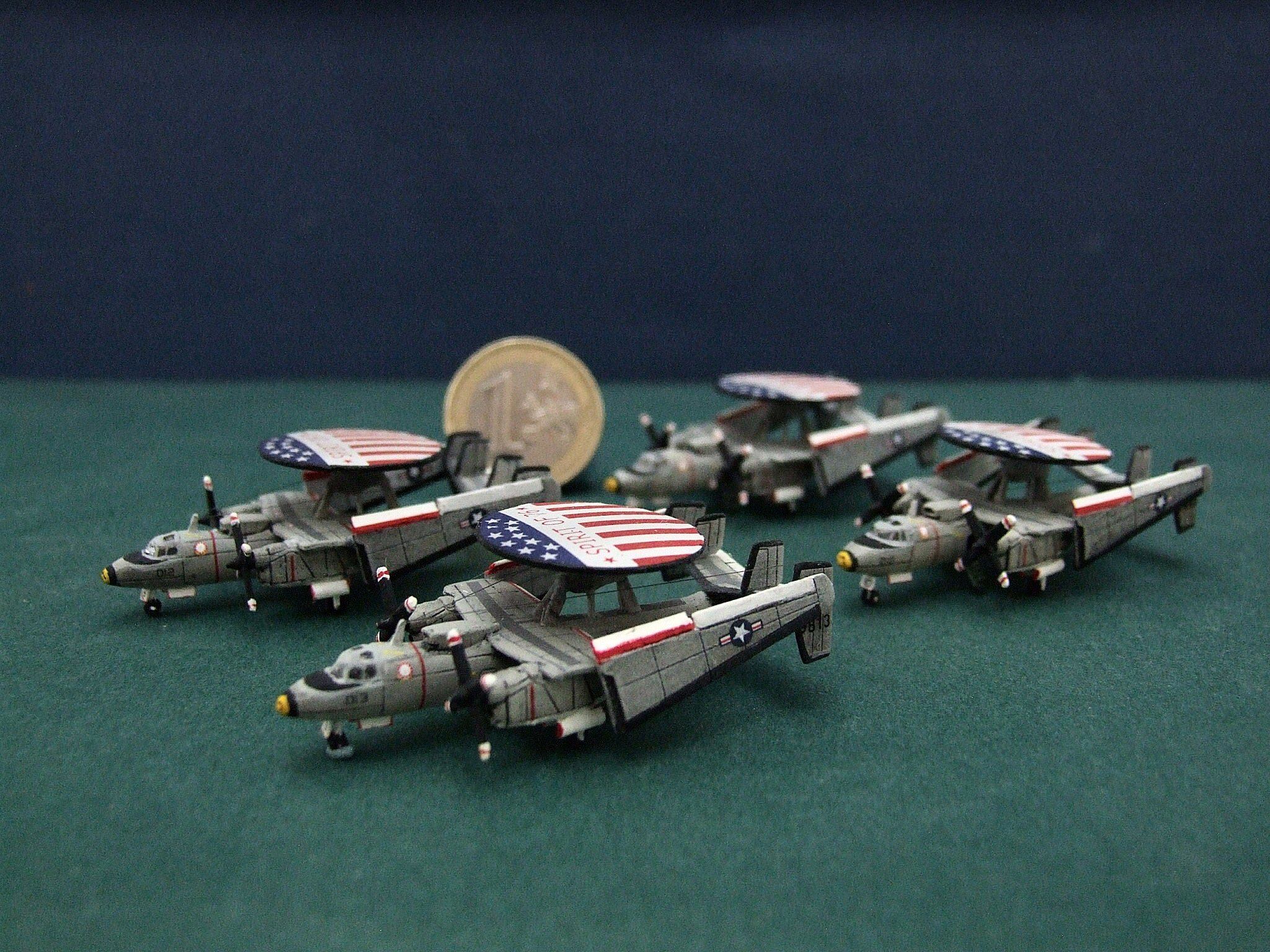 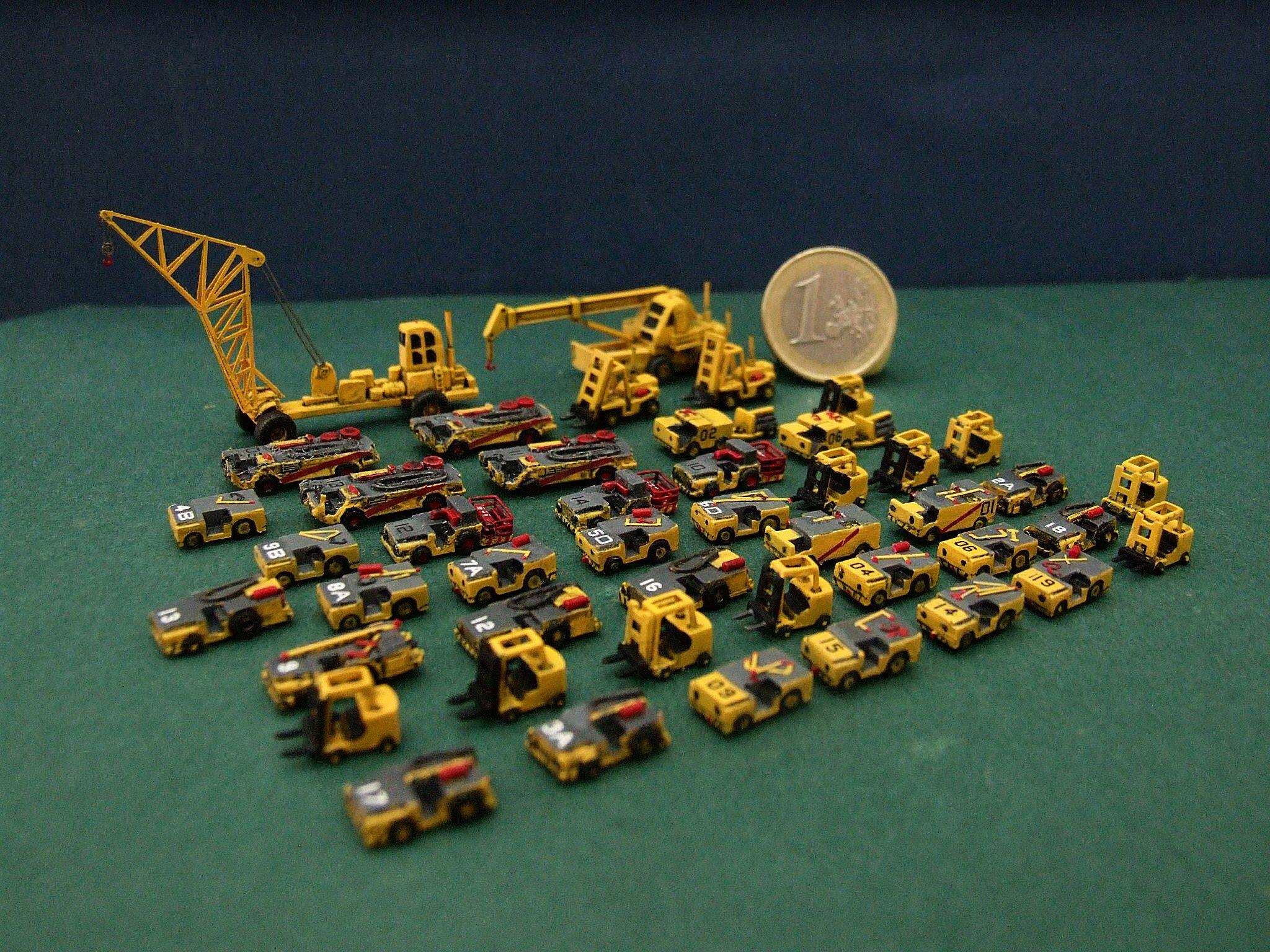 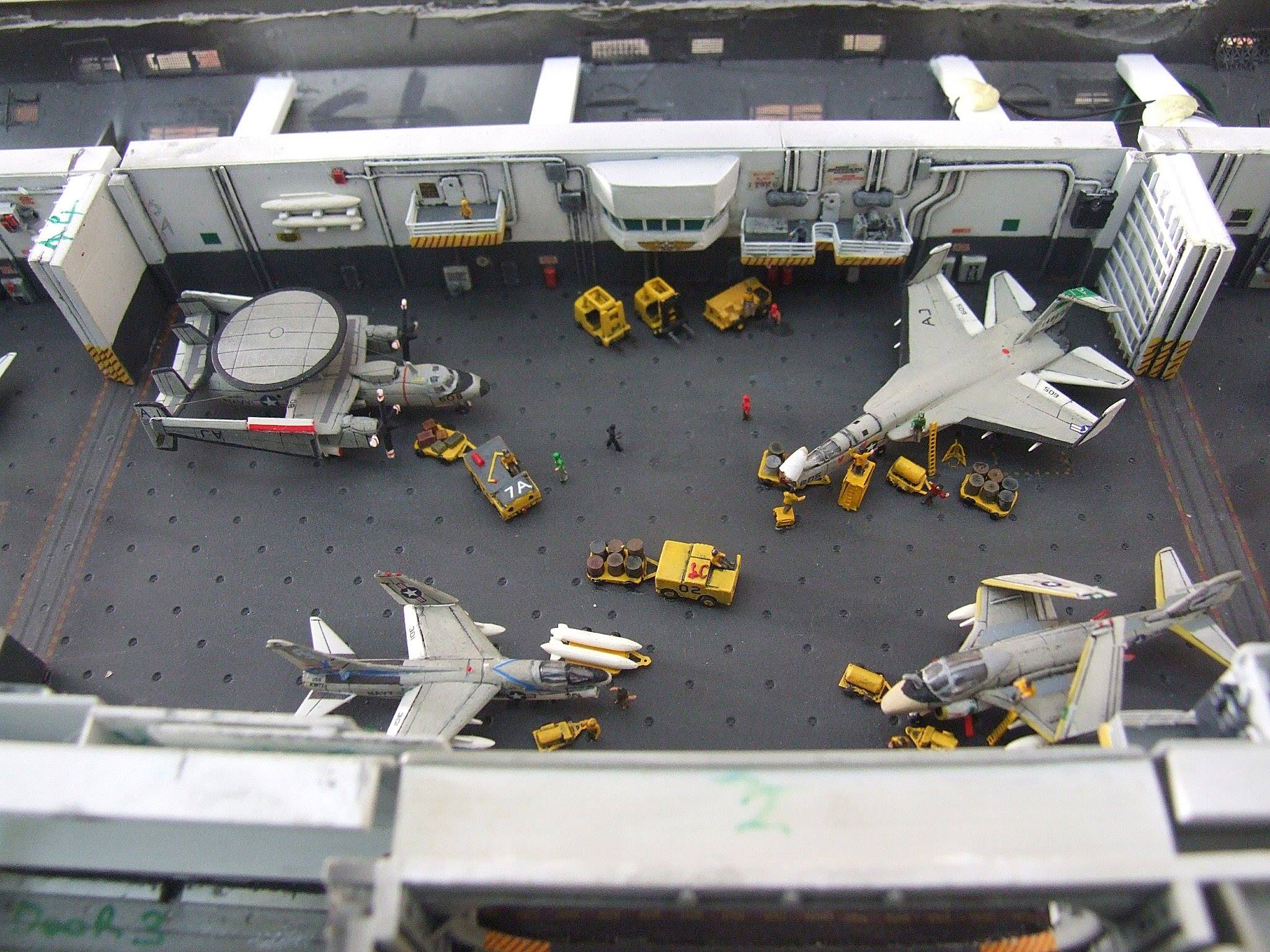 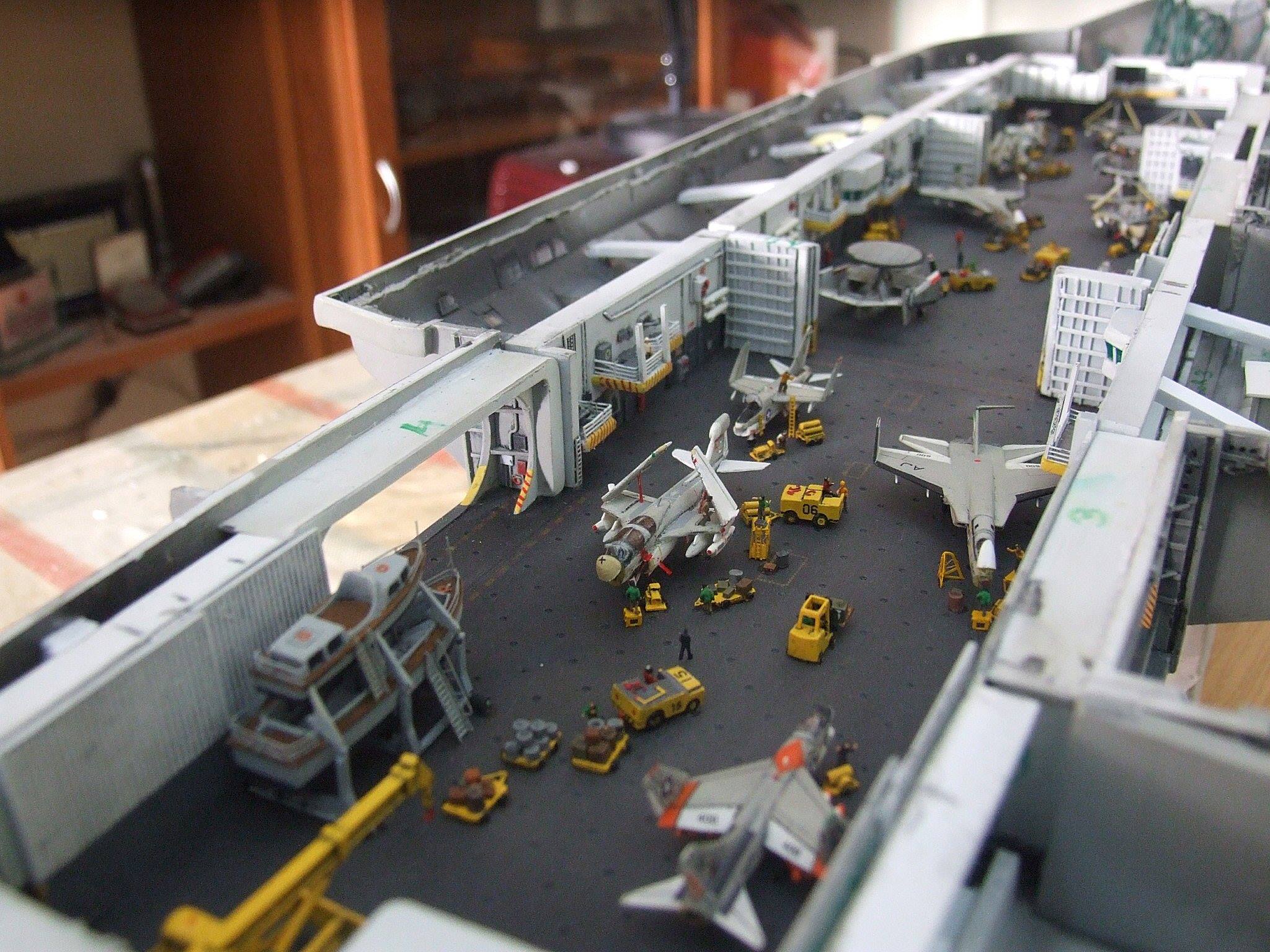 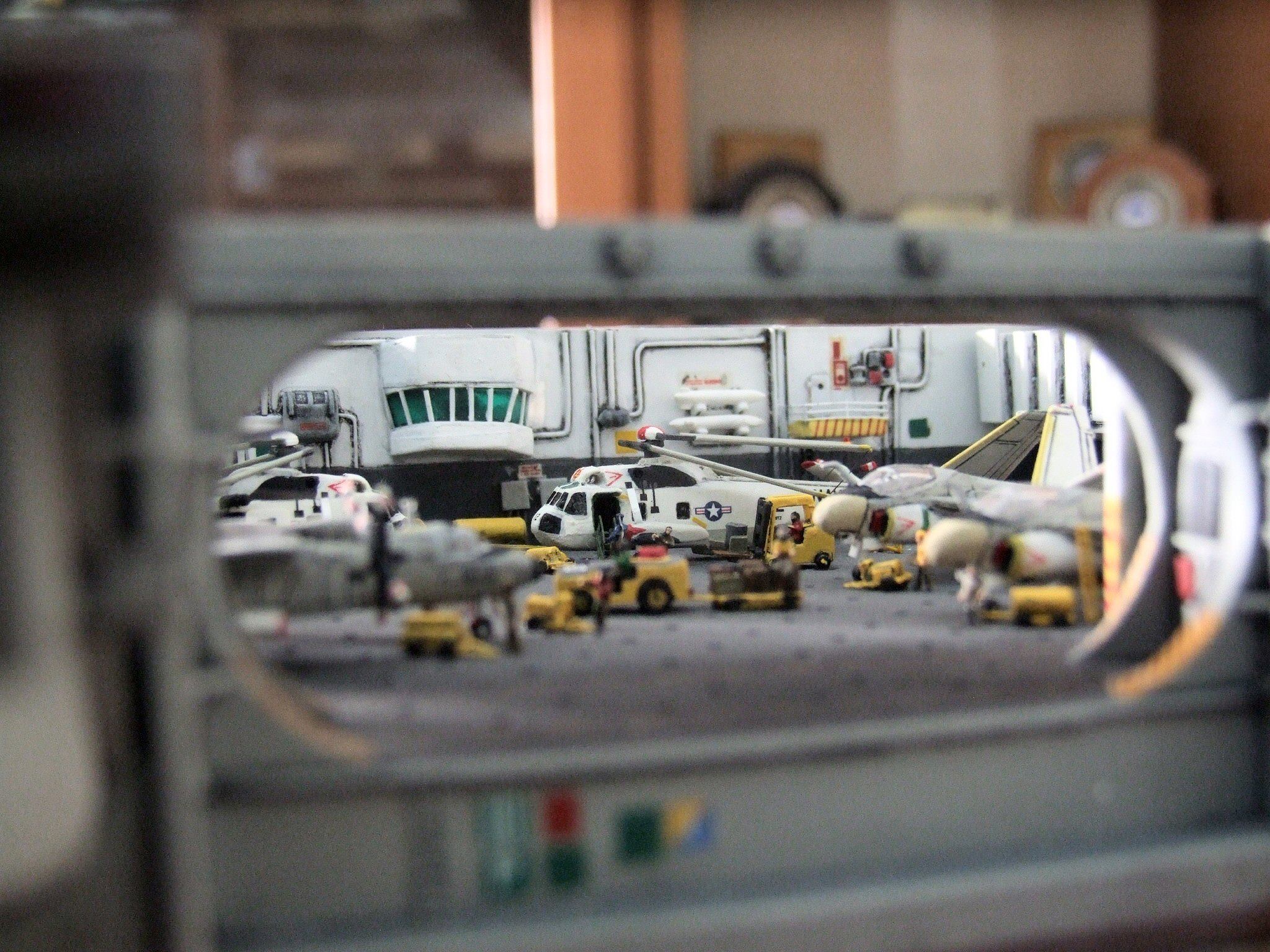 I wanted to portray the carrier in 1976 with Airwing 8 sporting Bicentennial markings.

The Hangar was built entirely from scratch using  20 thou plastic card , different gauges of  telephone wires for piping and trunking and small components from a spent PC motherboard for extra detailing. The Hangar is lit up with it’s own circuit utilising 12volts DC strip LED’s with a cordless diffuser system.

The Island had to be altered considerably …removal of sponson starboard side , scratchbuilt

sector antennas fashioned out of toothpick ends…various whip aerials …extra details on main mast, extra search lights and opening of most of the service doors. The island was sanded clean and all trunking and piping was added ,again using different gaugers of copperwire and plastic strips.  The island is lit up with it’s own circuit utilizing tiny 12 volts DC bulbs with green silicone sleeves for effect .

The Stern  internal housing was completely rebuilt for more accuracy, again most of it scratchbuilt.

The Hull was sanded clean . Piping and trunking added on using various gauges of copper wire , telephone wire and soldering lead wire.  All ventilation grids were hollowed out , reshaped, repositioned  and more added , then replaced with perforated brass sheeting…some were also blocked off as they were non existent on the vessel.  All the service openings,ie..boat decks, fuelling decks etc were removed  because they all looked like little ratholes and rebuilt from scratch , detailed The ones on the port side were relocated to a correct position and lit up using 12 volt DC bulbs with another circuit of their own. Crane deck rebuilt .

All catwalks were removed and added on photoetched catwalks which were again detailed further, adding on access cubicles , side piping and trunking, ordnance escape chutes, access ladders …etc.

Handrails and side fences attached, in the correct positions.Extensive further detail added to the elevators ‘ girder work.

Sparrow launchers reshaped and a new base structure was scratchbuilt for them . Those provided with the kit were late 1980’s versions and incorrect.

Hull Whip antennas and their supports were scratchbuilt , with correct positioning .

The Top Deck was all put together..airbrushed ,  and weathered heavily in some parts… The decals were a nightmare. Disintegrating once put in water. So all markings were airbrushed , markings were also missing from the decal sheet , so I had to add them on. Once finished I attatched the whole deck in one piece to the already finished hull …making sure there was a perfect alignment…no mean task.

The Seascape was sculpted from paper mache and painted with common household paint.

The Airwing was a breath of fresh air , adding on drop tanks ,sidewinders and repositioned control surfaces, all scratchbuilt. I even opened some canopies with aircrew inside the cockpits. Hi Viz decals came from  Starfighter decals and Yankee models . I used both Trumpeter and Tamiya aircraft

Deck Equipment . I used all the gear provided with the kit plus a couple of sets from Iron shiprights models, which were also further detailed  . Trolleys , oil drums , service platforms, tow bars ,groundpower units, oxygen trailers etc were all scratchbuilt using plastic sheeting and miscellaneous parts from the photoetch scraps box.

Deck crew and uniformed personnel . A mixture of L-Arsenal...Northstar..Goffy ..at least 300 to 400 figures in all

Paintwork .The model was airbrushed  in enamels as a base colour . Highlights and lowlights were airbrushed using acrylics. I used artist oils to weather the ship and Ammo products to give the vessel a worn look.  I used Gold Medal photoetch to detail the ship

Various articles from US Navy sites from the Web

Last but not least, I must thank  my good friend, Mr James Guard from the US, for his invaluable assistance to complete this model correctly.

Too many: see the description…………