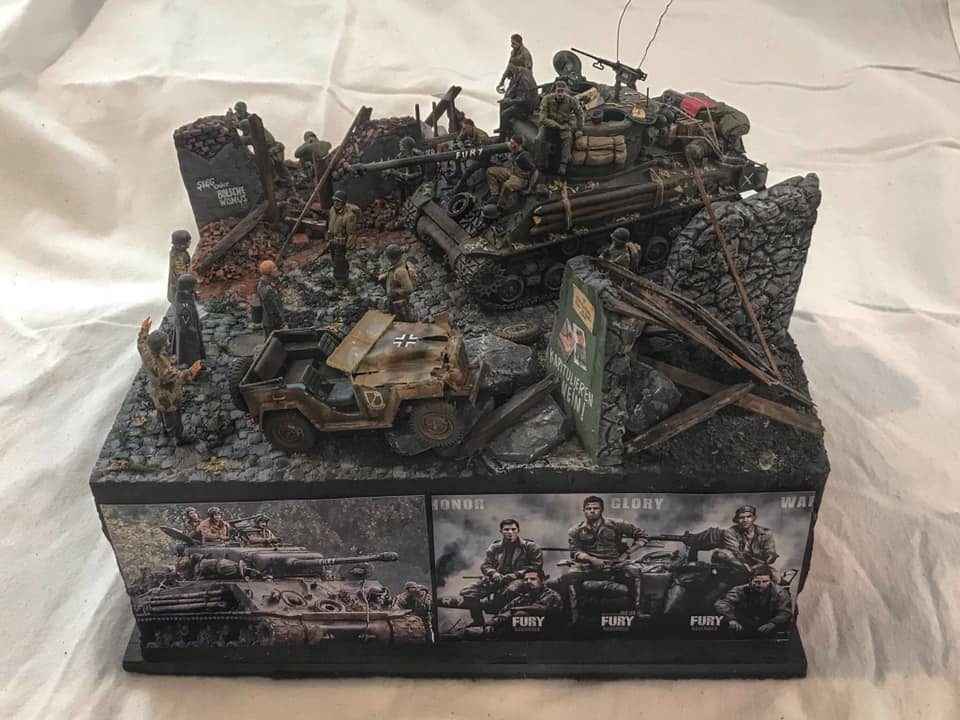 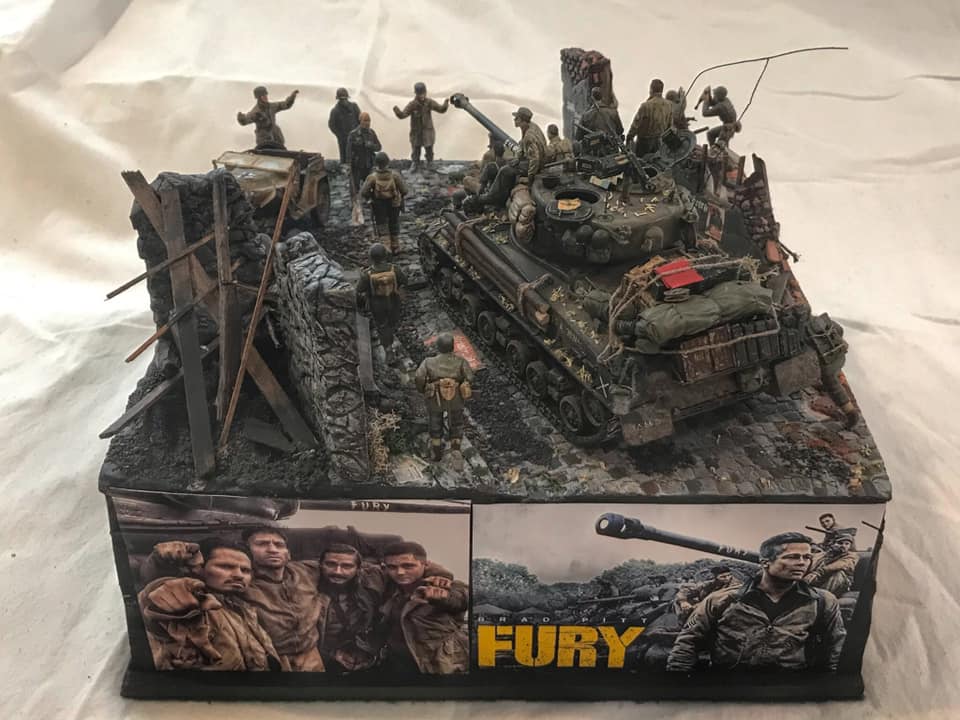 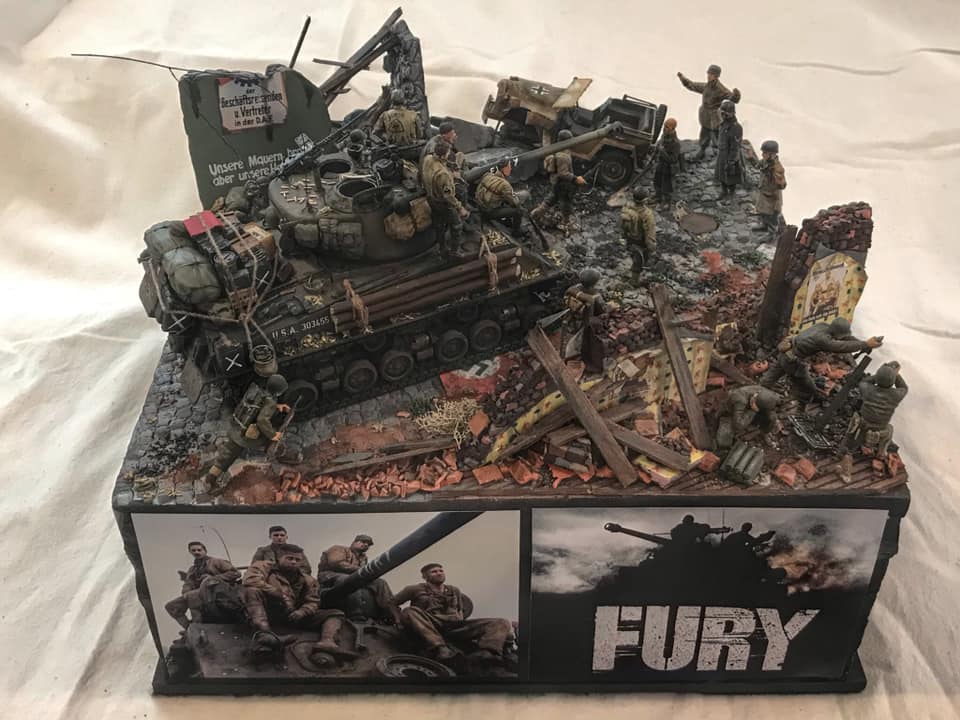 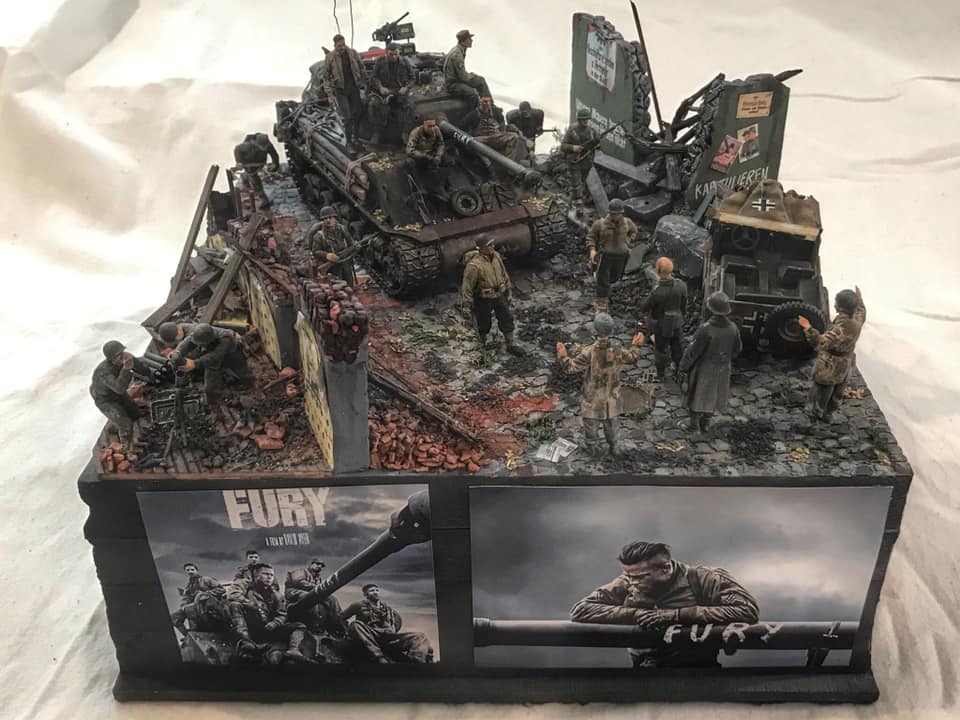 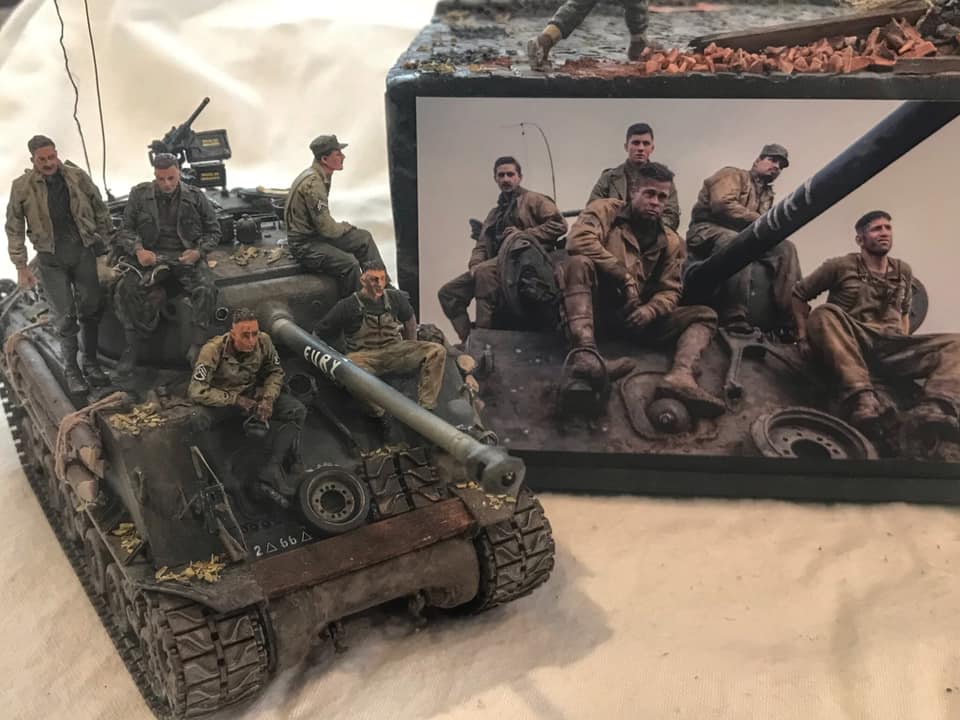 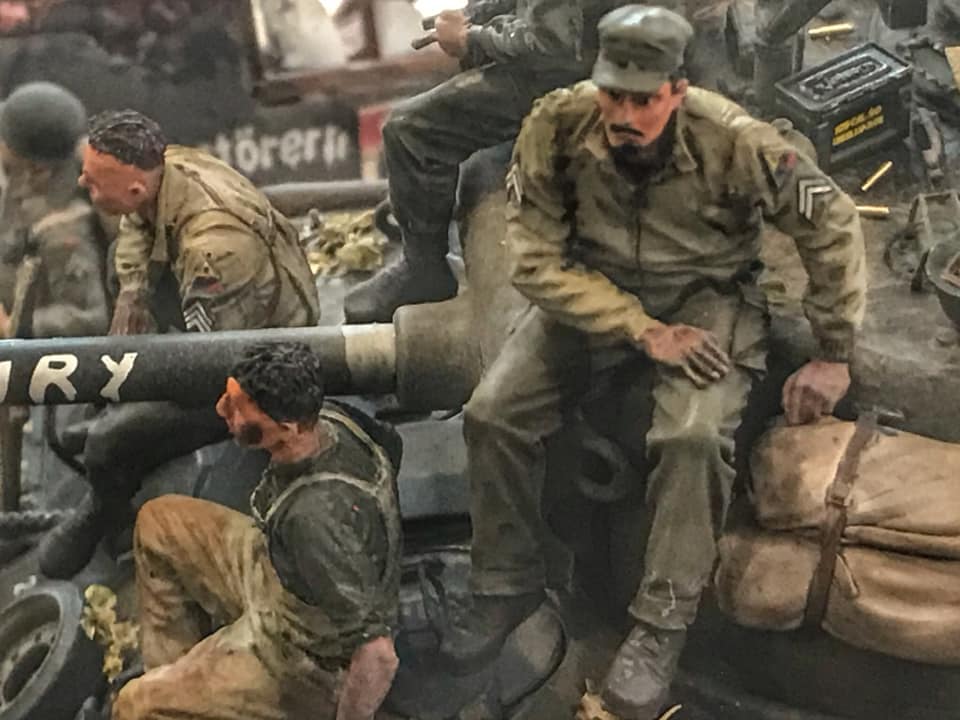 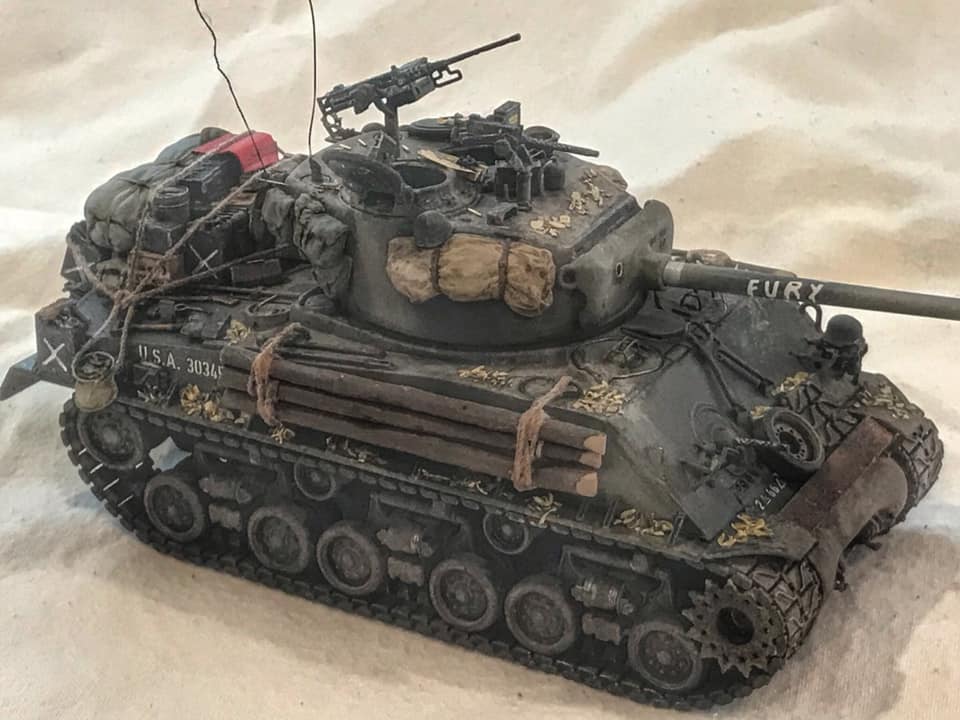 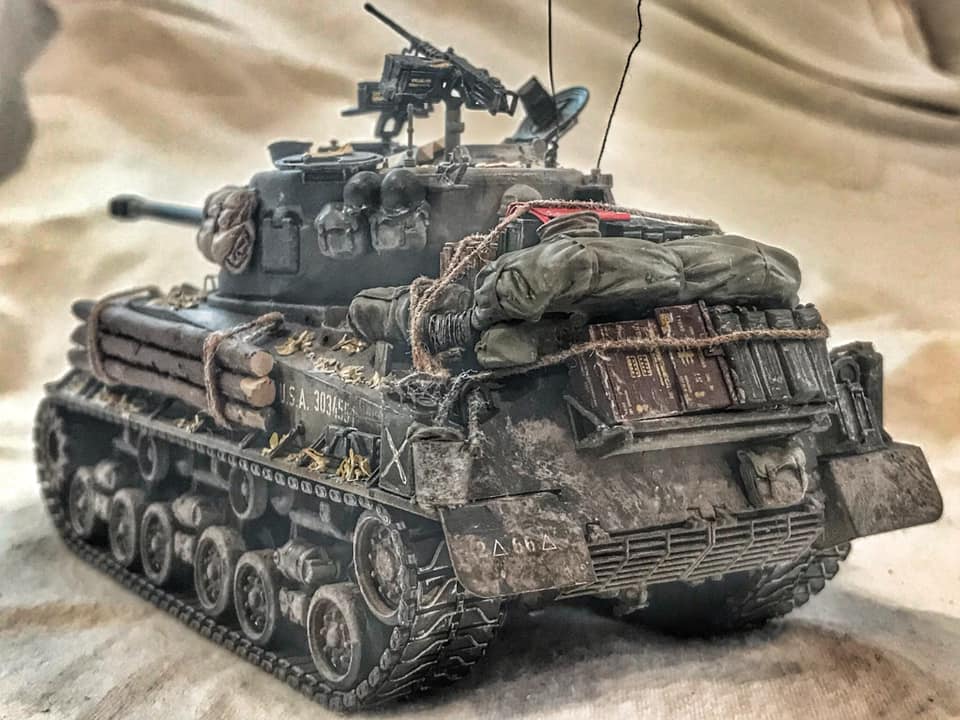 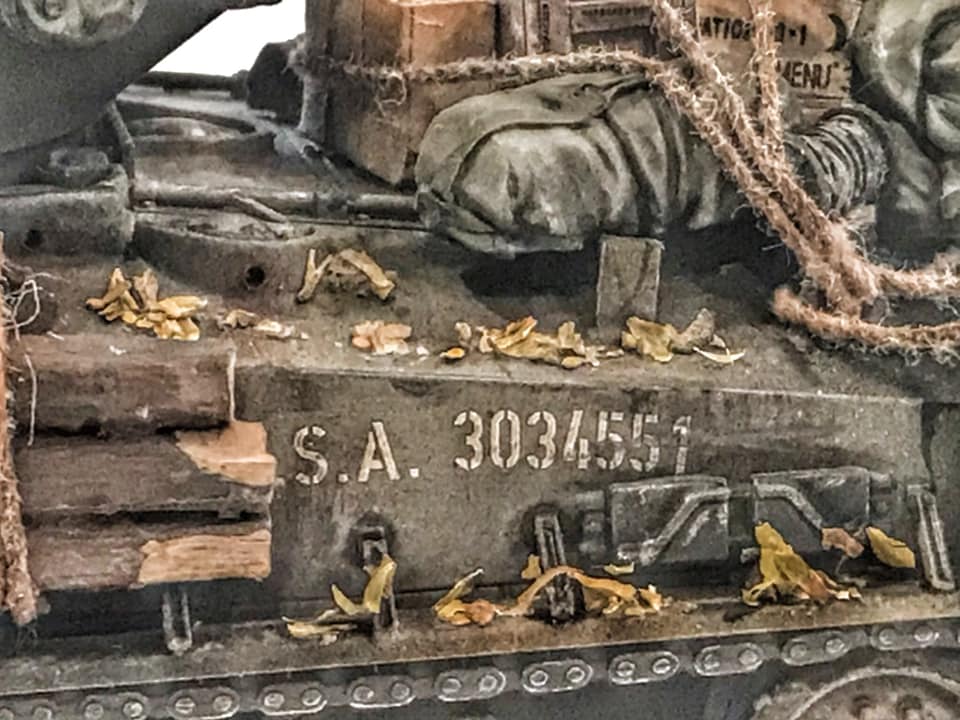 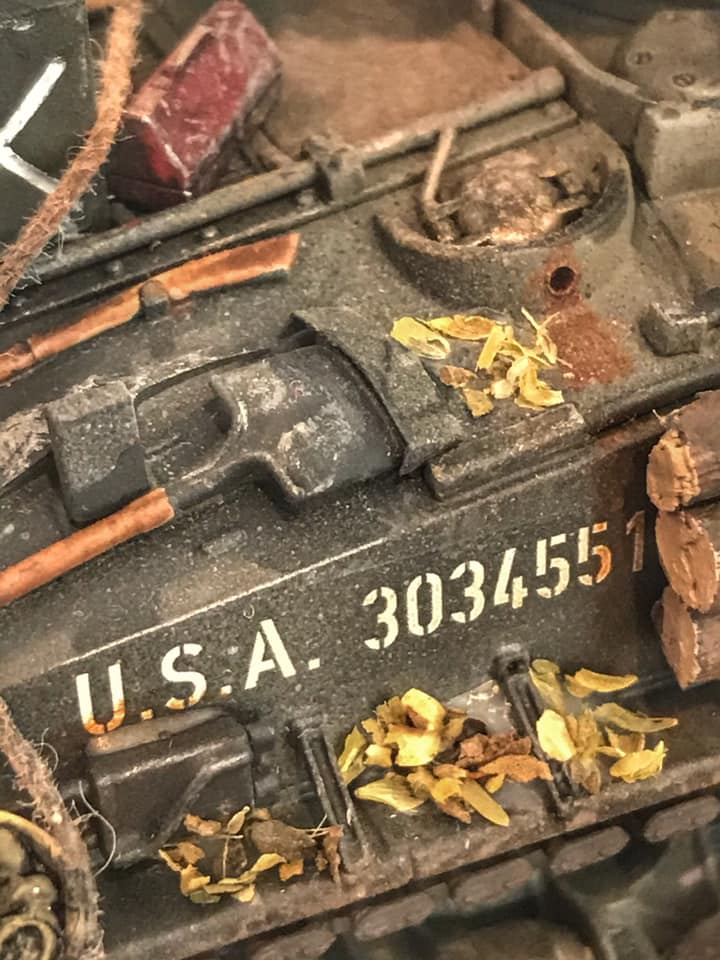 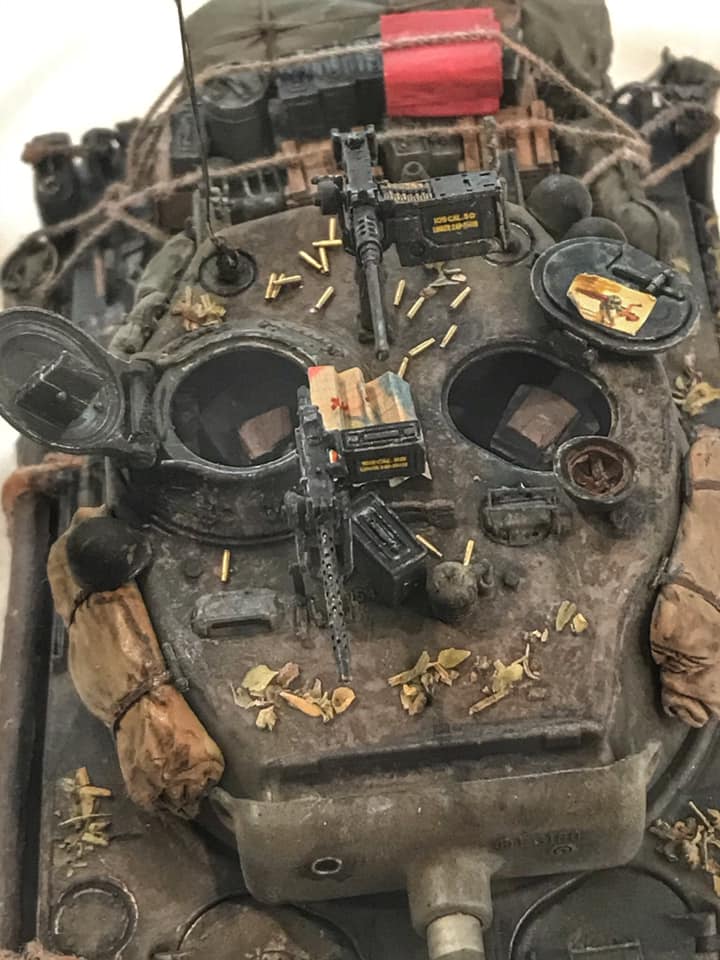 Name: U.S. Medium Tank M4A3E8 Sherman “Easy Eight” The tank featured in the movie “Fury”. The model is set, like the movie, in early April 1945, as the Allies made their final push into Nazi Germany. Don “Wardaddy” Collier, a battle-hardened U.S. Army First Sergeant in the Second Armored Division, commands an M4 Sherman “Easy Eight” tank nicknamed Fury and its veteran crew: gunner Boyd “Bible” Swan, loader Grady “Coon-Ass” Travis, driver Trini “Gordo” Garcia, and assistant driver–bow gunner “Red,” all of whom have fought together since the North African campaign. Red is killed and replaced by Private First Class Norman Ellison, a clerk typist from V Corps who was transferred to be a replacement. I wanted to make the tank as close as possible, an accurate replica of the Sherman used in the movie. I discovered that the actual tank used, was now an exhibit at the British Bovington Camp tank museum. This meant I could find videos of walkarounds and documentaries that gave me more views that I could obtain from watching the movie, or actual stills. Rather than buy the Italeri ’Fury’, which didn’t have great reviews, I opted for one of the Tamiya versions. As an inexperienced AFV modeler, I picked a brand known for ease of assembly. I also opted fir the Korean War version rather than the virtually identical WW2 version, because it came with a free Russian Gaz Jeep, a vehicle often pressed into German service once captured. For my diorama I wanted to convey the fact that many German troops fled from the Eastern Front towards the Western Allies, to escape Russian retribution. The kit was a Father’s Day gift from my girls, so my main expense was the Legend Easy 8 conversion kit…worth every penny. However the spare track provided, that sits in the front, doesn’t match the tracks on the vehicle (an error in the movie too), so I rectified that. The tank itself was airbrushed, with a standard olive drab from Tamiya. I then lightened the mix, and sprayed the center of each panel, for some color modulation. Then with an even lighter shade, I sprayed all the hatches. I drilled out the drainage holes, where the oil filler caps were, having noticed this in photos. I used artists oil paints to simulate oil stains, much cheaper that name brand stains in a bottle, and a tube of paint will last years. Using reference photos from the movie, I replicated the dirty surface on top of the turret by using ground up artist pastel crayons, mixed with odorless thinners. Empty shell casings from Ebay, hand drawn map and photocopied and reduced pin up picture (in the turret hatch lid) completed the ‘lived-in’ look. The tank had no interior, and I wanted the crew all standing on the outside, so realistically the hatches needed to remain open, as if they’d just got out. After studying photos, I used some scrap resin parts to make a gun breech, tank commander and loader’s seats. I watched a ‘Lindybeige’ YouTube video that had extensive interior footage, for invaluable reference material. The tank in the movie has a dirty, well used look rather than rust or weathering, so I focused on making it soiled and grubby, but not so much as to lose all the details. Trying to stay within a reasonable budget, I decided that laser-cut leaves were an unnecessary expense, and opted for dried oregano leaves from our kitchen larder, which look fairly convincing. I did some research on the aircraft recognition panel seen sitting on top of the rear deck stowage in the movie. There wasn’t one in the Legend add-on set, so I made one from folded alumininium foil and painted it the correct shade of red. The entire diorama took me a month, so I’d say the tank took me around 2 weeks to build. I wasn’t working, due to the pandemic, so I was able to devote quite large chunks of time to it, every 3 or 4 days. This was my second ever AFV kit, having come from an aircraft modeling background. I had had a 35 year lay-off so the idea of switching ‘disciplines’ appealed to me.