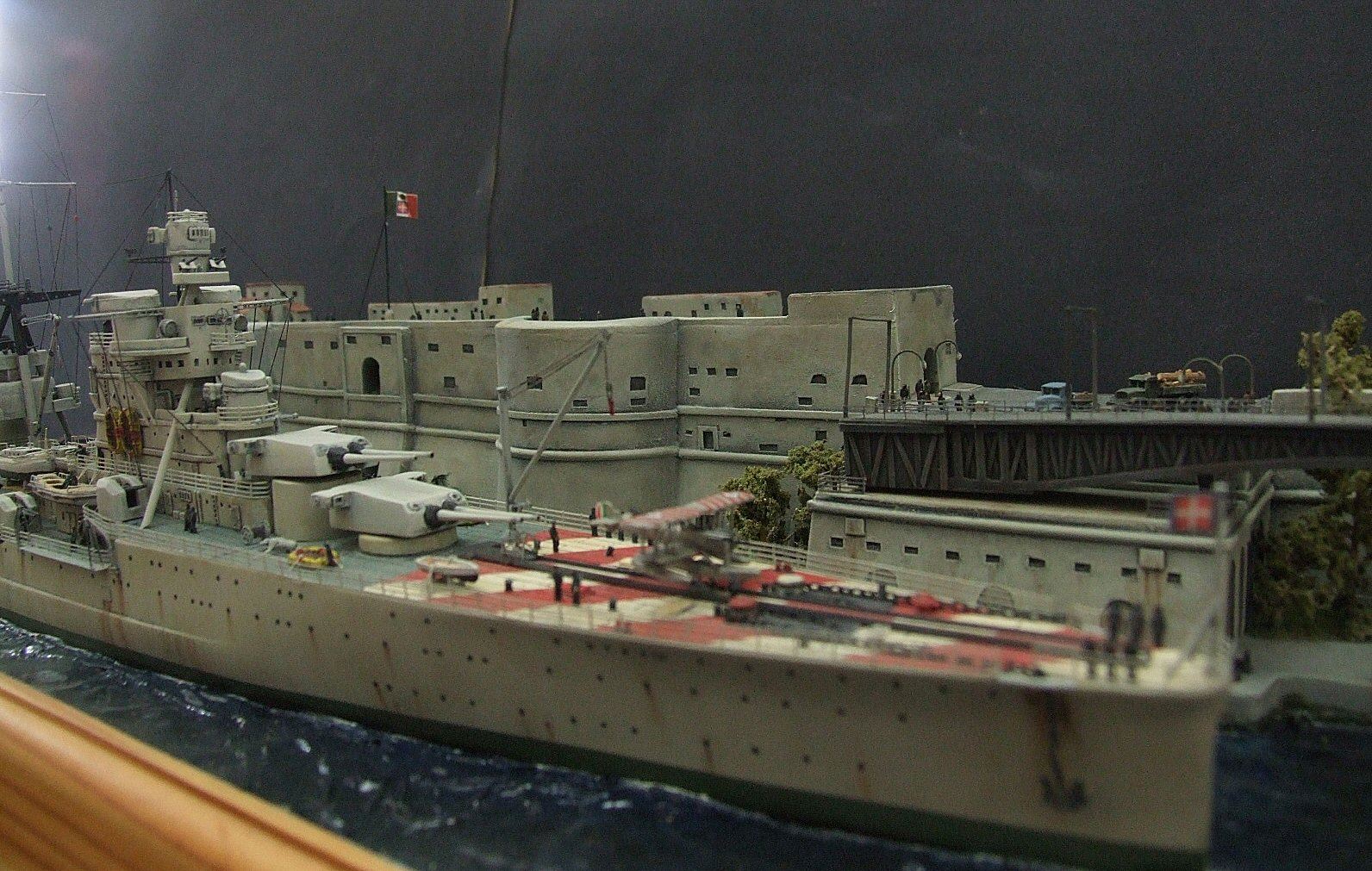 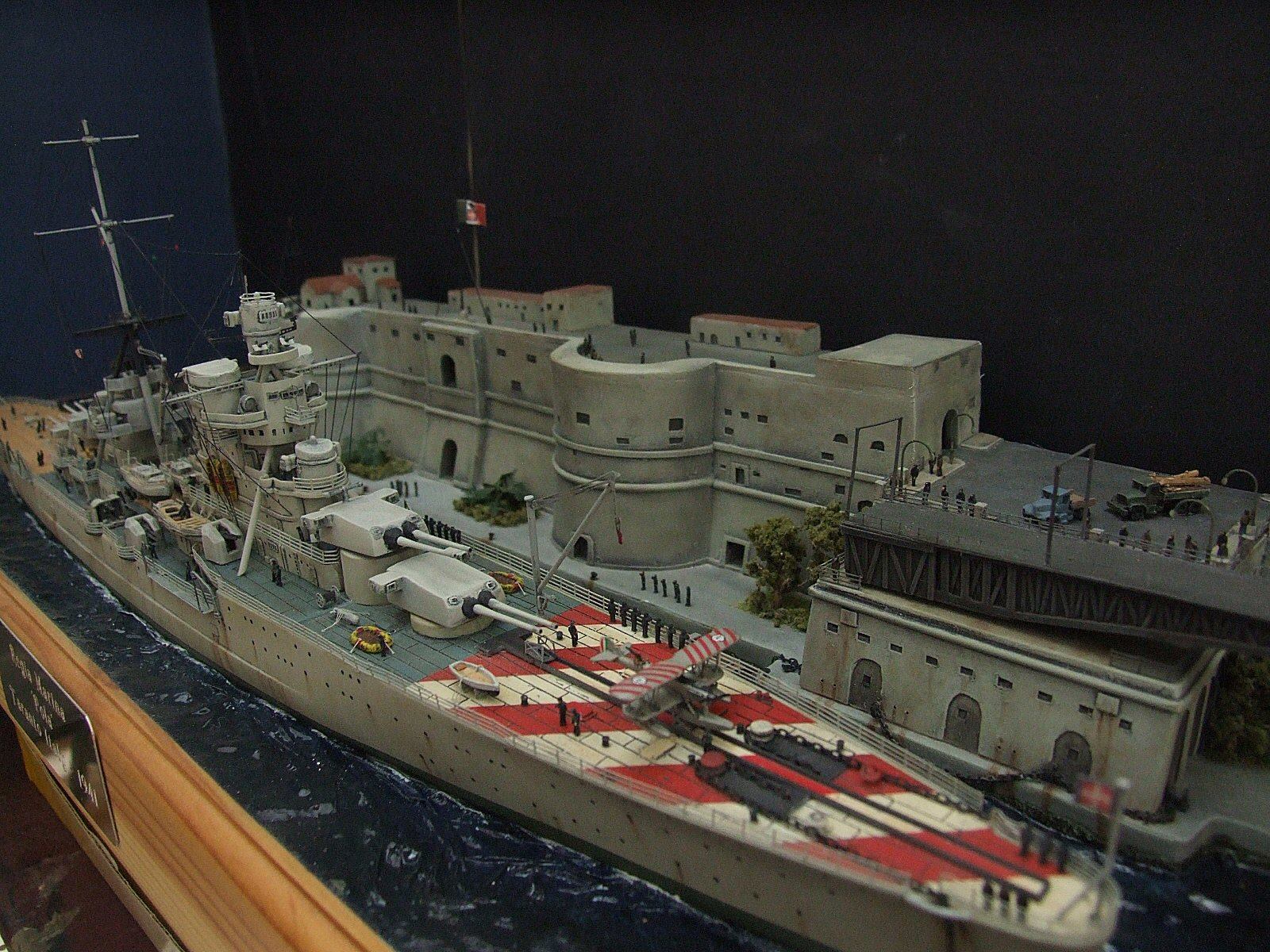 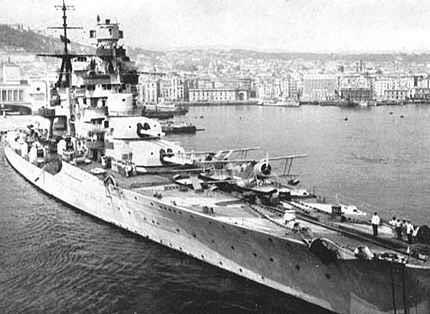 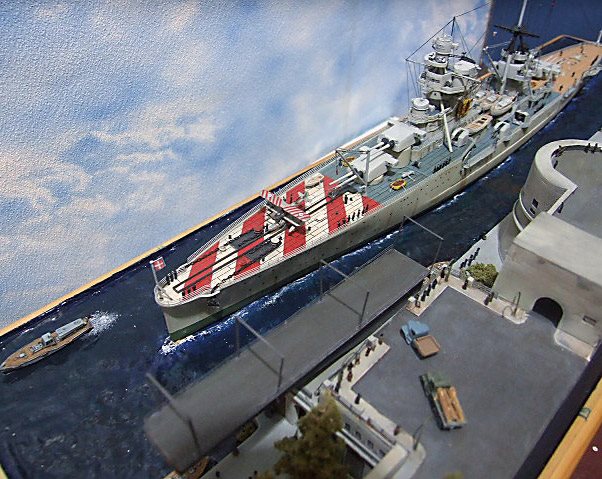 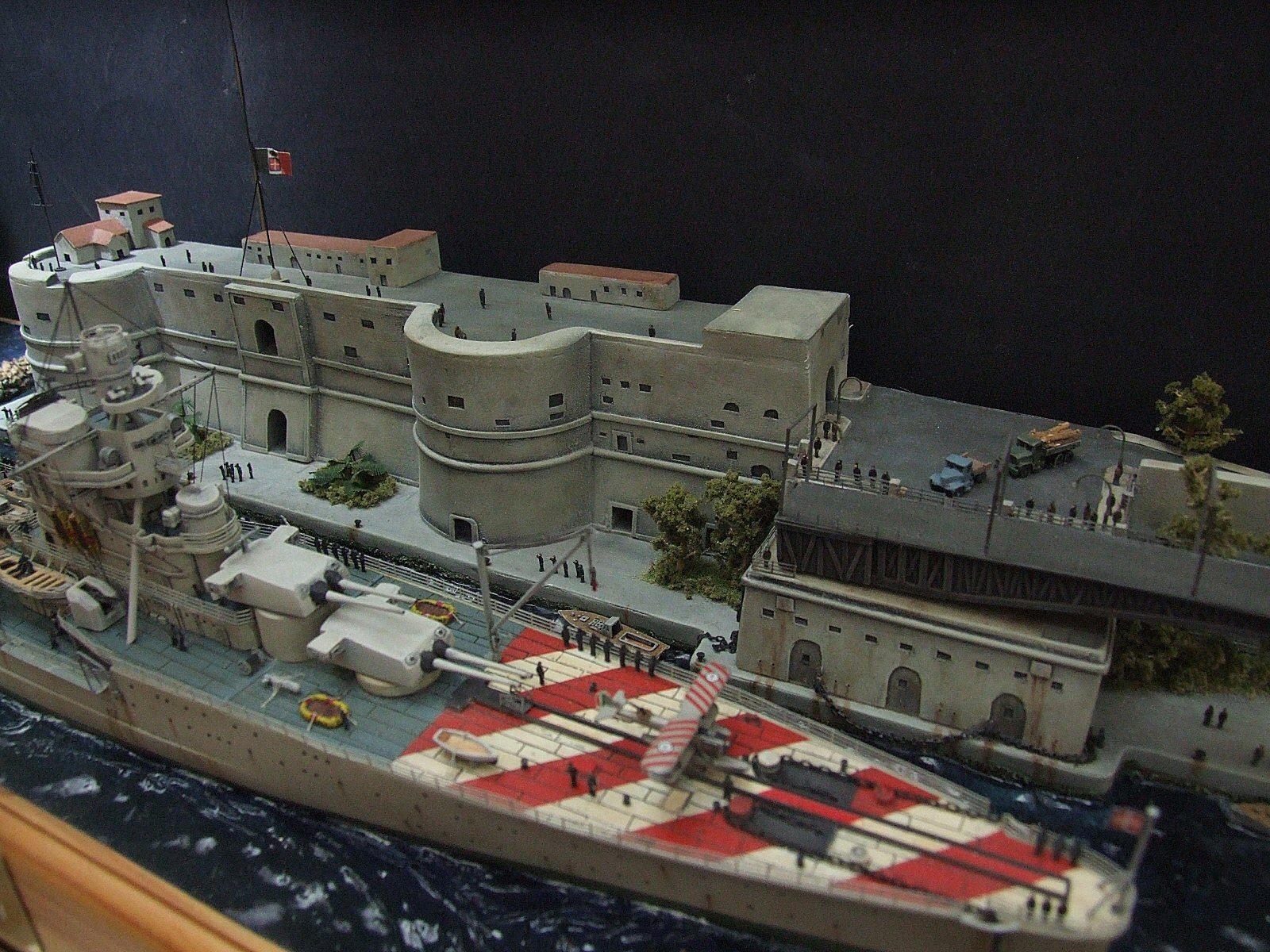 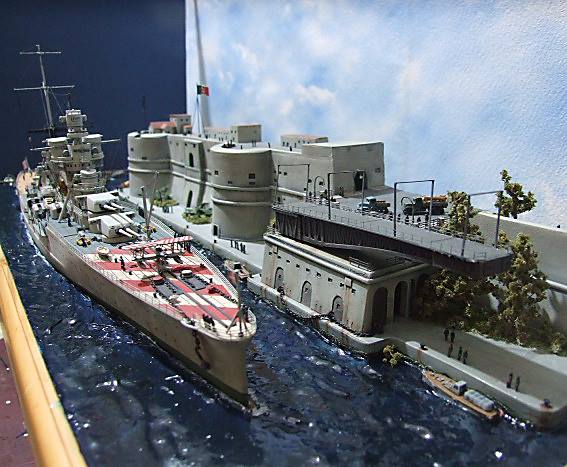 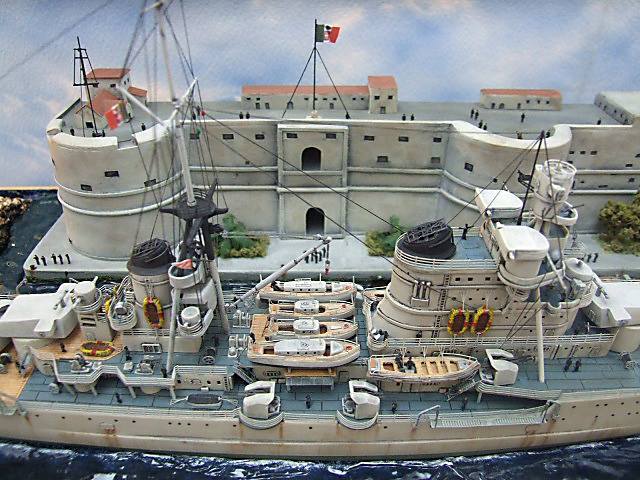 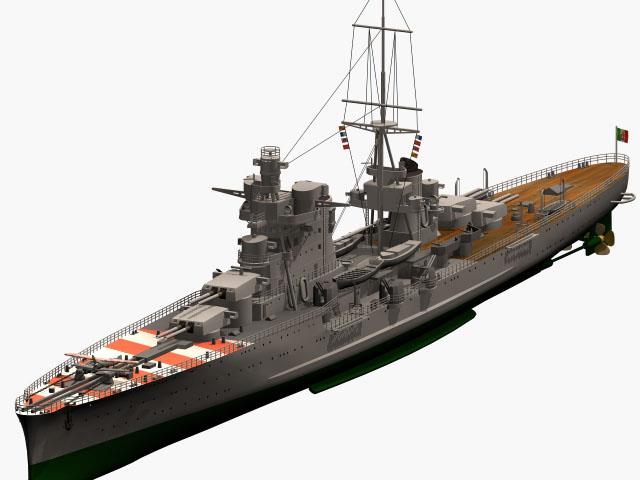 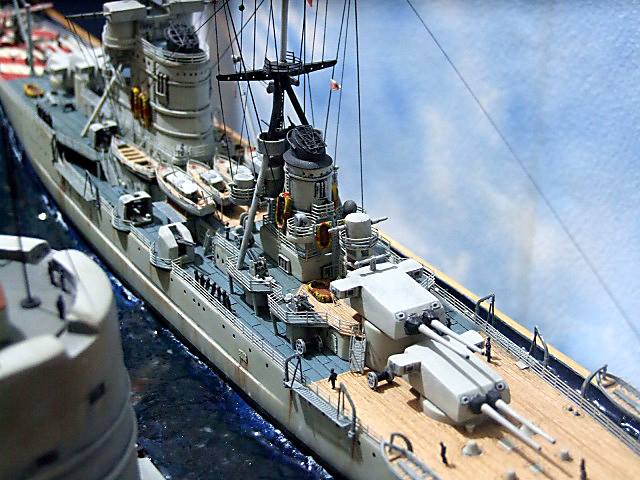 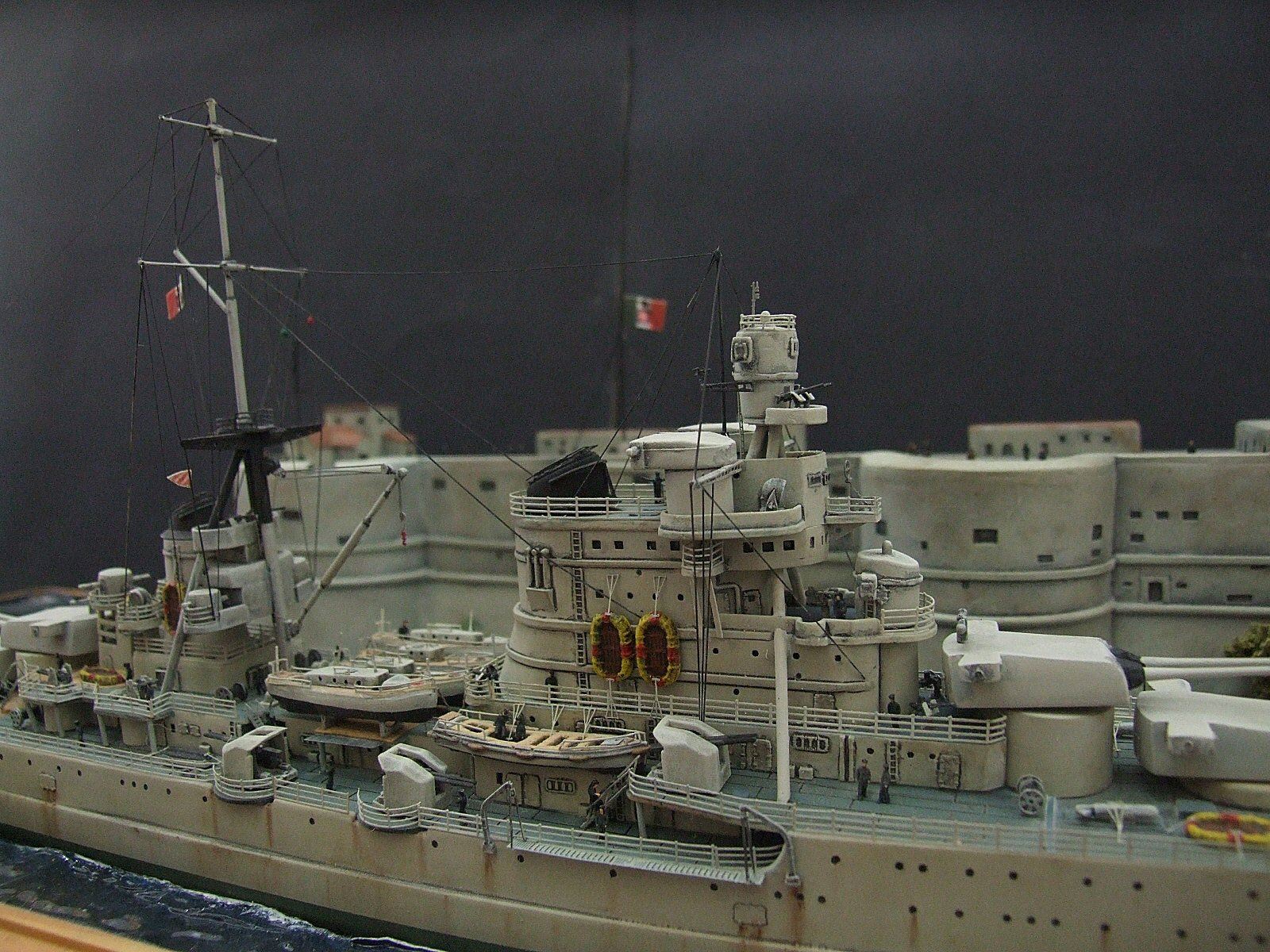 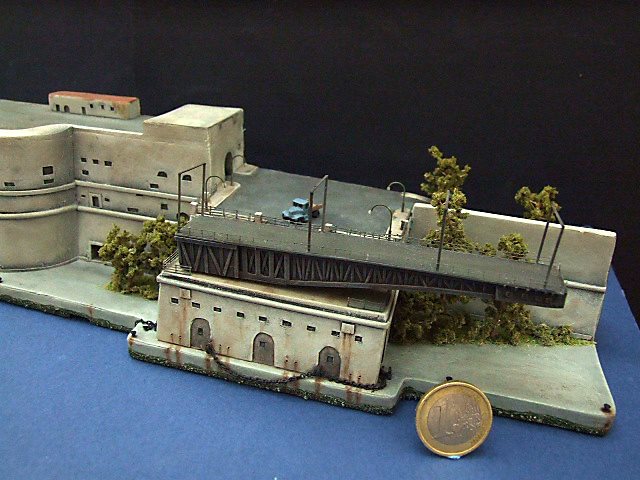 This is my diorama of the Regia Marina Italiana “ Pola” in 1941 .  I wanted to portray this vessel sailing  out of Taranto with the famous Castello Aragonese which dates back to 1707, as a backdrop. The main feature of this Fortress is the Swing Bridge which is opened on both sides of the canal to let large vessels  through.  The structure of the bridge is quite different to how it looks in the present day.  The Diorama only shows one side of the canal.

The Fortress , which includes the Swing Bridge is all scratchbuilt.  Materials used were Balsa Wood covered with 20 thou plastic sheeting and plastic strips.  The round towers were made from cylindrical plastic containers and further shaped at a slanting angle to match the slanting angle of the lower side of the battlements.  I tried to be very faithful to the appearance of the fortress in 1941. The Swing Bridge was all constructed from evergreen plastic strips .  The trees were also scratchuilt. I tried to create an atmosphere of Naval personnel saluting the Pola sailing out of the harbour and people and vehicles waiting for the bridge to reopen once the ship went  through.  Vehicles which were converted came from the spares box .

The Vessel comes from Hobby Boss and it only cost me $15.  It was however a daunting challenge and much reworking was required  to correct the many imperfections in the kit.  The Rear Tripod Main Mast was totally scratchbuilt adding bits and bobs from the photoetch spares box.  Supporting columns for the forward supertstucture had to be added and fitted into the superstructure. The superstructure was sanded clean and further enhancement was added using bits and pieces that cameto hand.  Funnels were also corrected and detailed.  Correctly positioned portholes were drilled on the hull.

All the boating equipment was scratchbuilt as those on offer in the kit left nothing to be desired. Wooden decks were also made for them, from left over scraps of the wooden rear deck.  No Dinghies were available in the kit , so I had to scratchbuild them.  A master was made out of milliput and castings made accordingly. The seaplane a Piaggio P6 was also totally  scratchbuilt.  Forward jib added  as well as a running track equipment for the said aircraft. The four twin barrel machine guns situated  rear to the main mast were also scratchbuilt. The forward and aft main turrets were corrected and detailed as well as the armament on the side of the vessel.  Various single barrel machine guns were also added to the superstructure.

The deck was sanded clean and lightly scribed to simulate plating on the forward and midship deck. Boats and ladder gantries were added to the side of the ship. The rear decking came from Artwox, which fitted perfectly.

The harbour boats were all conversions from the Tamija boating set.  The figures in the diorama are a mixture of Fujimi and L’Arsenal sets.

The model including the fortress was painted  with a mixture of enamels, acyrlics, oils and AK Interactive products.