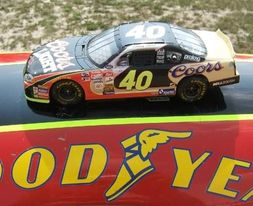 I’m Ray Lawson II, 54 years old I started building models kits, spurred on by my model building father at age 7. I was taken to my first NASCAR race in 1978 at age 11, and started building NASCAR model kits in 1984 with the first 4 monogram NASCAR kit releases. I joined a modelbuilding club that same year. (The Lafayette Scale Modelers). I took it upon myself to learn from every type of model builder I could meet during those formative building years. Then in 1987 I was commissioned to build NASCAR kits for a client (a closet full) and wound up starting a side business that I still do to this day. (See Ray’s Model Shack on Facebook) I’ve, built models for NASCAR drivers, car dealerships, sculptors, comic shops, Hobby shops, movie theaters, an air force squadron, an army commander, and a couple celebrities and I was former NASCAR artist Sam Bass’s model builder.
I build way more than just NASCAR kits. I’ve built, sci-fi kits, Star Wars, star trek, old school horror and thriller kits, armor, aircraft, helicopters, figures, WW2 aircraft, Gundam, anime, superhero and comic book model kits, predator, and aliens kits. Here though, I am showcasing my current model NASCAR model kit collection (none of what you will see here are diecast cars, I’m not a fan of diecast cars. Although I do own a few but not many). These are displayed in a custom-built wall unit that took me two years to design and build, representing 4 NASCAR tracks, their front stretches including their start finish lines and walls with the names of the tracks on each wall.
And a couple other shots of a Coors #40 chevy on the rear cars front left fender.
So enjoy and thanks, give me a shout at Rays Model Shack on facebook !

Total collection since the mid 90s