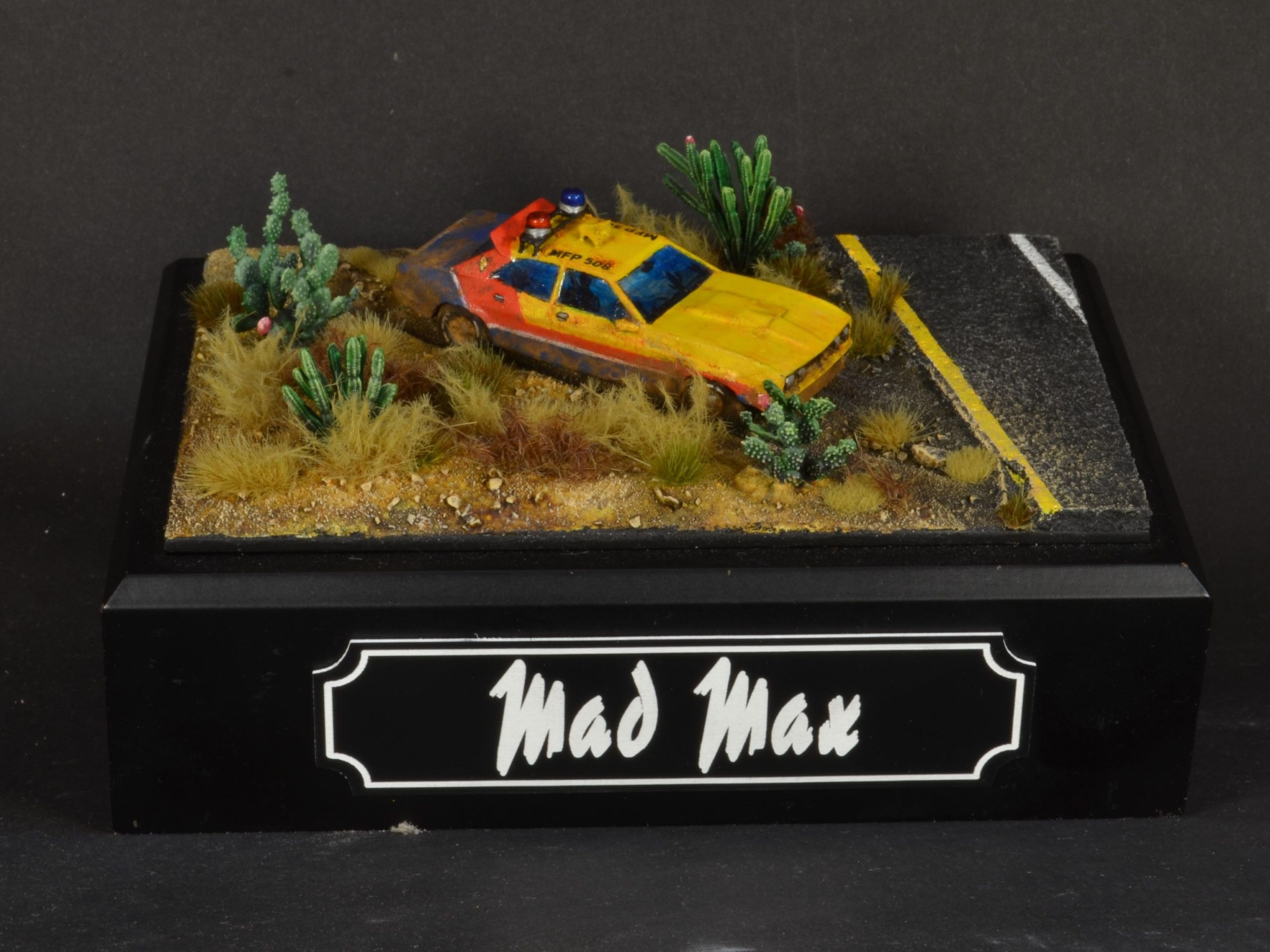 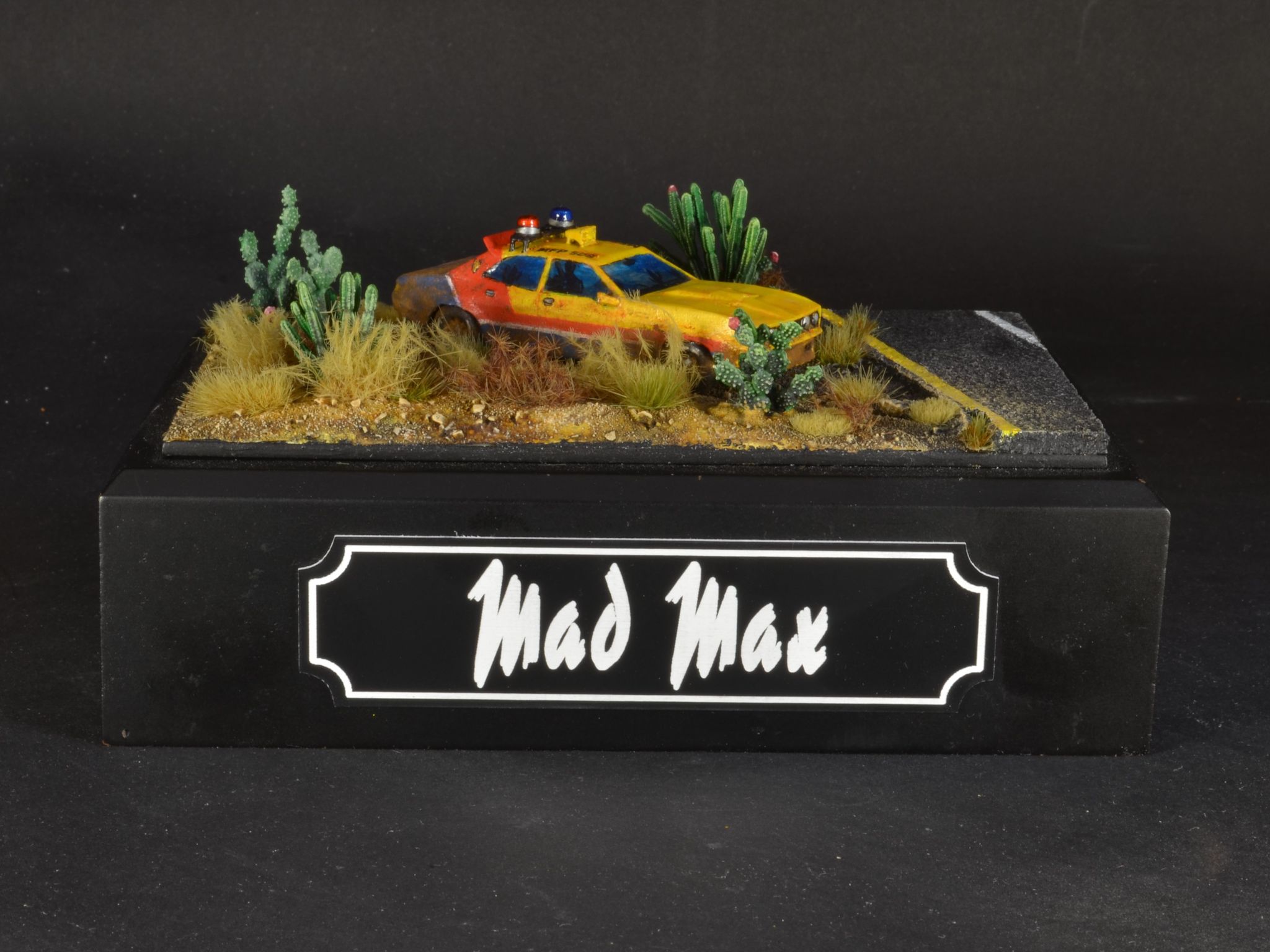 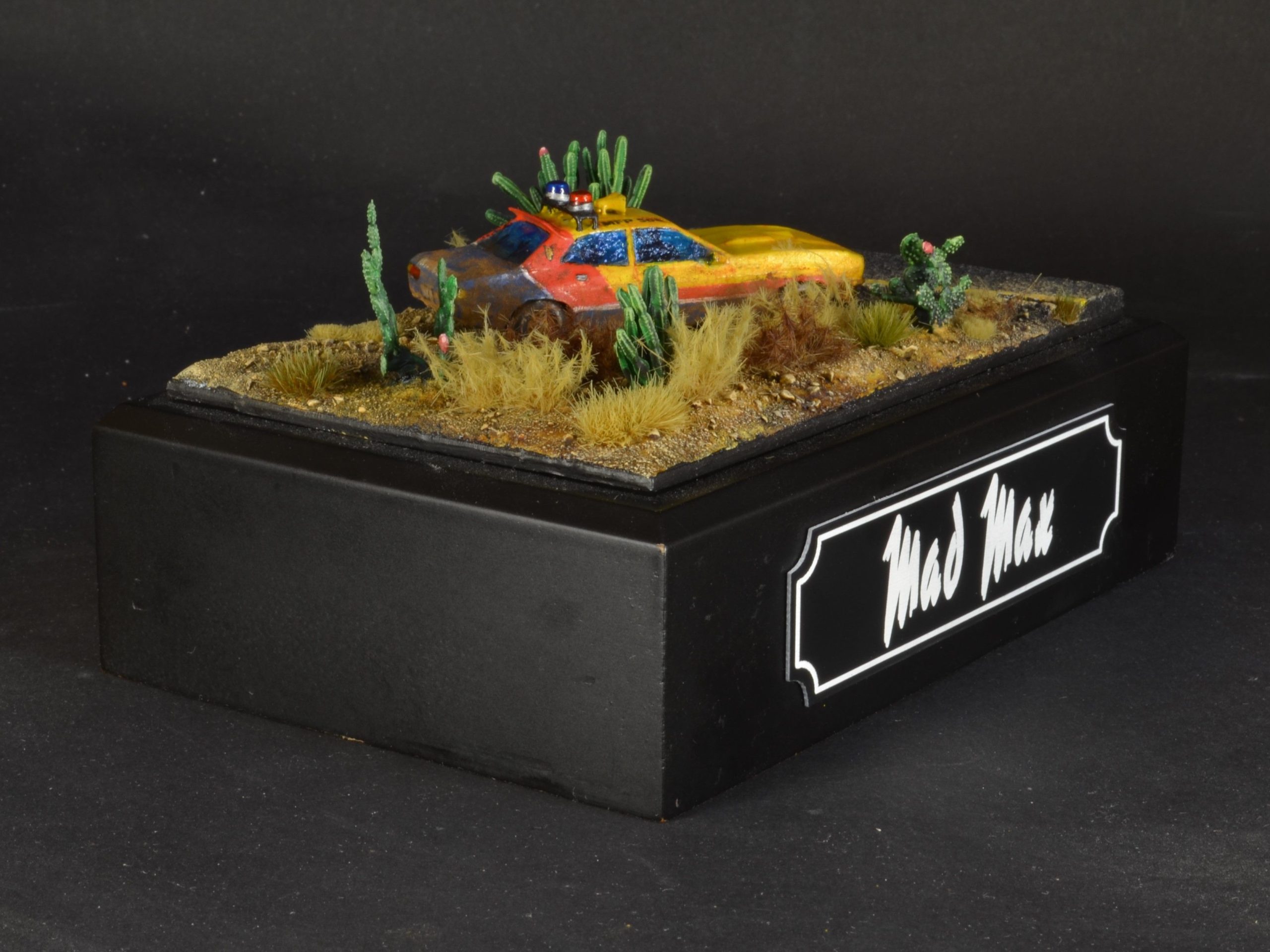 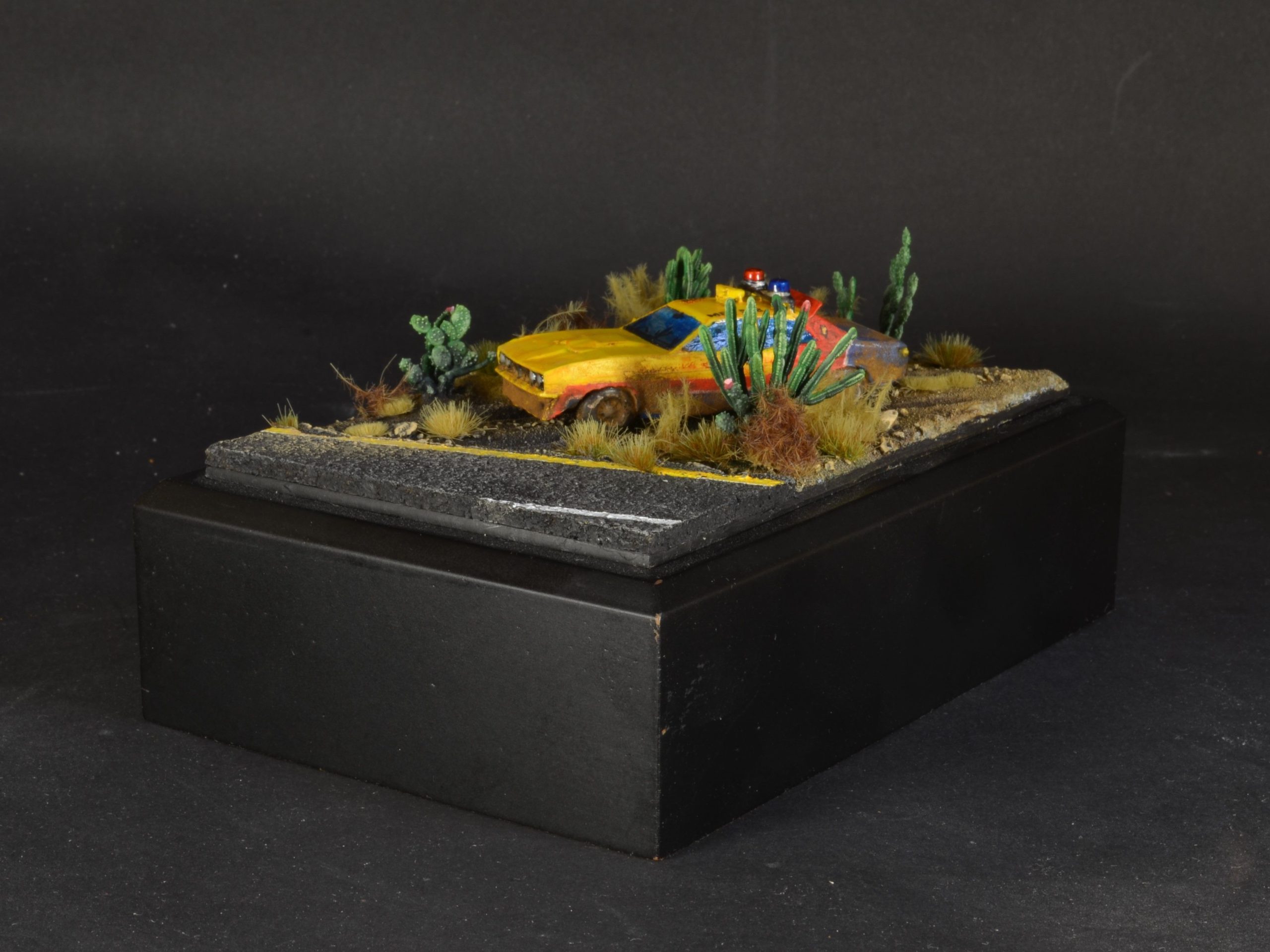 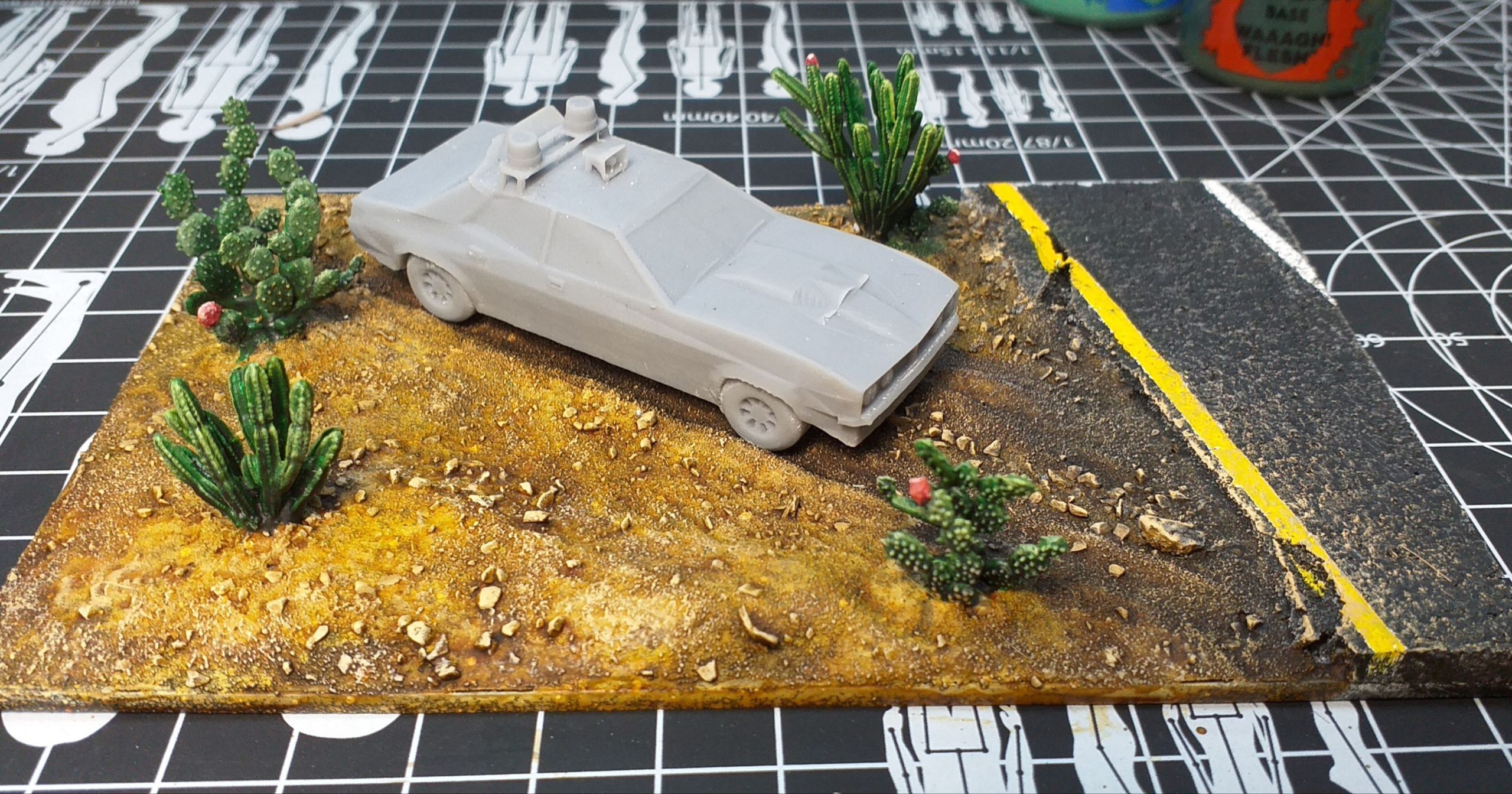 This small and relatively simple diorama was something I did in my local miniature/gaming club in Zagreb called UMS Agram (https://www.facebook.com/UmsAgram) during last autumn before the final lockdown of 2020. During our weekly meetups, I spent about two to three hours each session working on the diorama.

With complex dioramas, I always like to have some kind of technical drawing (draft), even a simple one (like this one), which will show which elements I need to make them easier, but also to know how much material I need. In this case, the materials were not be a problem because the diorama itself is minimalist.

After working out the initial idea, I realized that the biggest problem was finding a model of the Ford Interceptor. There are various die cast models in various scales like 1/64 or 1/18, but they are all made in Australia and cost approximately $ 200 with postage. Plus taxes and customs duties. So I looked for free STL files and found one model that was acceptable to me. I had it printed at DiyConnect in 1/64 scale. While the model was being printed, I searched the internet a bit for photos from the original Mad Max to find a coloring scheme, but also ideas for vegetation / environment for the diorama.

I decided to place the diorama on a wooden plinth by Buco Model Base, and cut the base of the diorama from 1.5 mm thick plastic. To ensure a straight cut, I used my Proxxon jigsaw and later sanded everything with a Proxxon grinder.

The next step was to make the road. I decided to make it from cork sheet 2mm thick. I fastened it to the plasticard board with masking tape and cut it to size using a scalpel blade. I glued the cork to the base bord using PVA glue and small dabs of super glue to fix it in place immediately.

When the road was fixed, I turned my attention to the rest of the base. I needed to build up the volume so the transition from the road to the dirt road would be minimal. I used DAS air-drying clay slightly mixed with PVA glue and water. That way it would stick to the surface of the plasticard board. Using a sculpting tool, I made wheel tracks that would make the dirt road later on.

The first surface I added texture to was the dirt road. I covered it with PVA glue slightly diluted with water, just enough to make it spread easily. Then, I carefully placed medium sized pebbles in the middle of the dirt road making sure they don’t protrude high in the air – to prevent it from „damaging“ the Interceptor. When I was satisfied with the ammount of medium sized pebbles, I covered the entire surface with extra small sized chinchilla sand.

Next up were all the other surfaces. The procedure is quite similar to the one for the dirt road, except in the fact that I sprinkled the pebbles randomly (rather than purposefully planting them in desired spots). Again, the final step was covering the surface with chinchilla sand. I left it all to dry.

As I have finished with the building of the base, it was now time to paint it. As always, I started with spraying. I started with a black undercoat followed by several lighter greyish shades ending with a pure white.

When the spraying was done, I now started adding washes. I used sepia and brown washes quite freely, just making sure I made some darker and lighter surfaces.

The road was then painted black and drybrushed with grey and white. Then it was time to add the lines. I masked the road with masking tape leaving only two lines. Both of them I covered with white paint first. When the paint was dry, I painted one of them using yellow.

All that was left was to paint the cacti (by Pegasus Hobbies). I painted them using green and olive green shades, slowly building highlights.  The final touch were the flowers on the cacti. Using some violet and white paint I painted them carefully.

For the vegetation I used different sets by Gamer’s Grass. There are tiny tufts, regular tufts, 5mm tufts, spikey tufts. All are slightly brownish/ocre/sepia tones to tie it all to the desert theme of Mad Max. I glued all the tufts using PVA glue and the pattern was kind of random. Again, make sure the tufts on the dirt road are not high as they would get cut by the vehicles travelling it.

As I said, the Interceptor is a 3D print of a free STL file. Obviously, if the file were great, it wouldn’t be free so I was ready to do some extra prep work on it before being able to paint it. Luckily, DiyConnect did a great job printing and the car only needed minor repair work to level the bottom plate of the car which I did using DAS air-drying clay. If it hadn’t been the bottom part, I would have probably used green stuff or some other modelling putty. But the bottom part could have been done with the clay.

First up it was time to prime the car. (NOTICE: I had several cars, some were failed prints, but I decided to paint them as well – to have a reference and work out the glitches in masking and spreying of all the colours before applying them to the original model destined to be used on the diorama.) The primer I used was a Citadel Averland Sunset. Being yellow, I figured it would be the best for the MFP colourscheme. When it was dry, I spreyed the cars with Yellow car sprey. Then, using a masking tape, I covered the part of the vehicle I didn’t want to be red and spreyed the car with the Red car sprey. Again, when it was dry, using a masking tape I covered the part of the vehicle I didn’t want blue and spreyed it Blue car sprey. When the masking tape was removed, it was now time to add some freehand. I first needed a white thin line between the red and blue parts as well as the INTERCEPTOR sign on the back of the trunk. Both of these I used white oil paint. It is the easiest to use, because any and all mistakes can be removed using a thinner. Practice writing on a paper or some other surface before attempting it on your model. It will still need some fixing using a blue oil paint. I sealed all the colours with Satin Varnish before adding new layers. In the end, I decided to sketch some reflections in the car glass. I used grey acrylic tones. At a later stage they were blended into bluish tones to resemble clear sky reflection. Weathering was added using Ammo Oilbrushers for rust and some pigments for dirt.