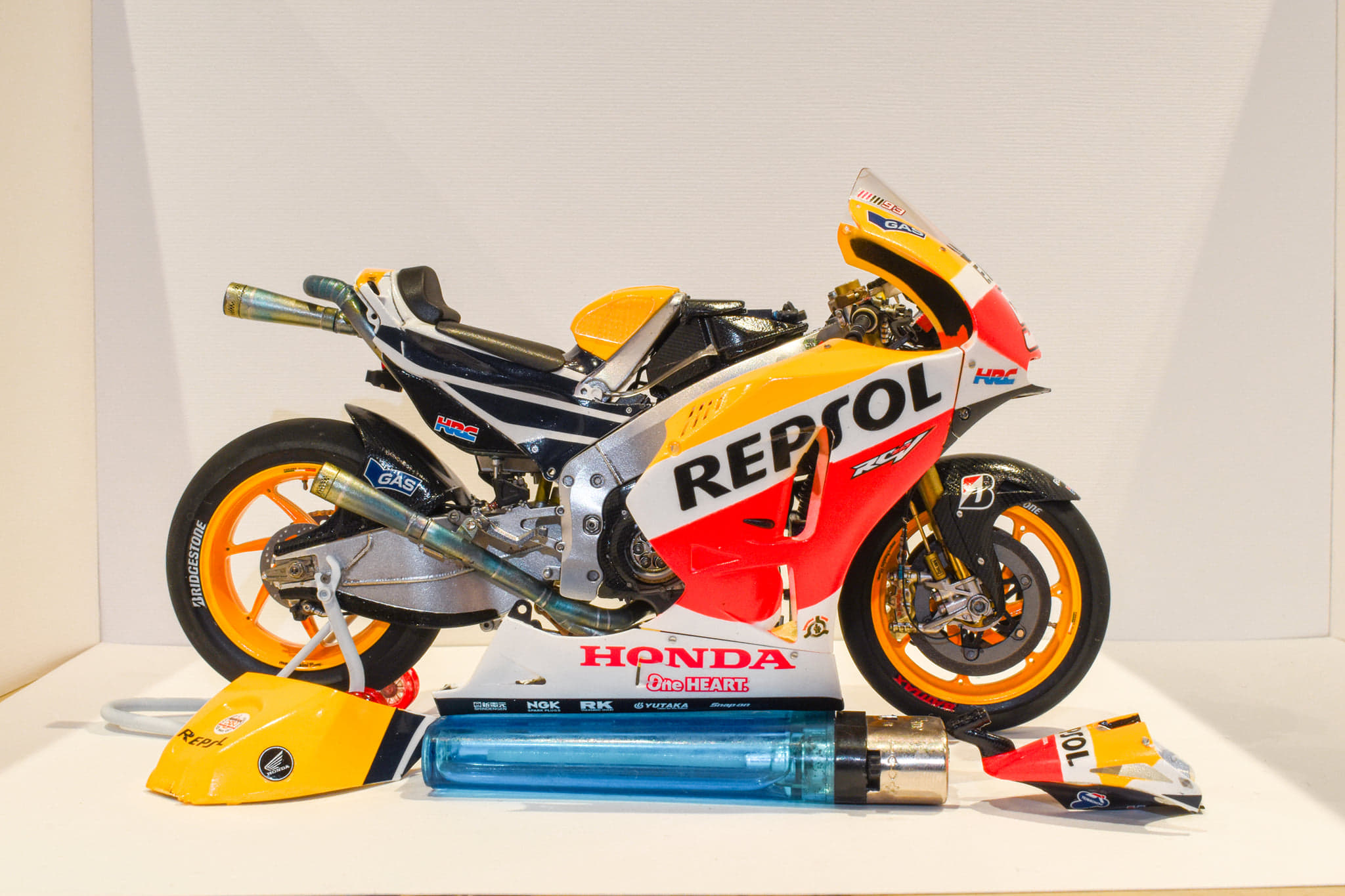 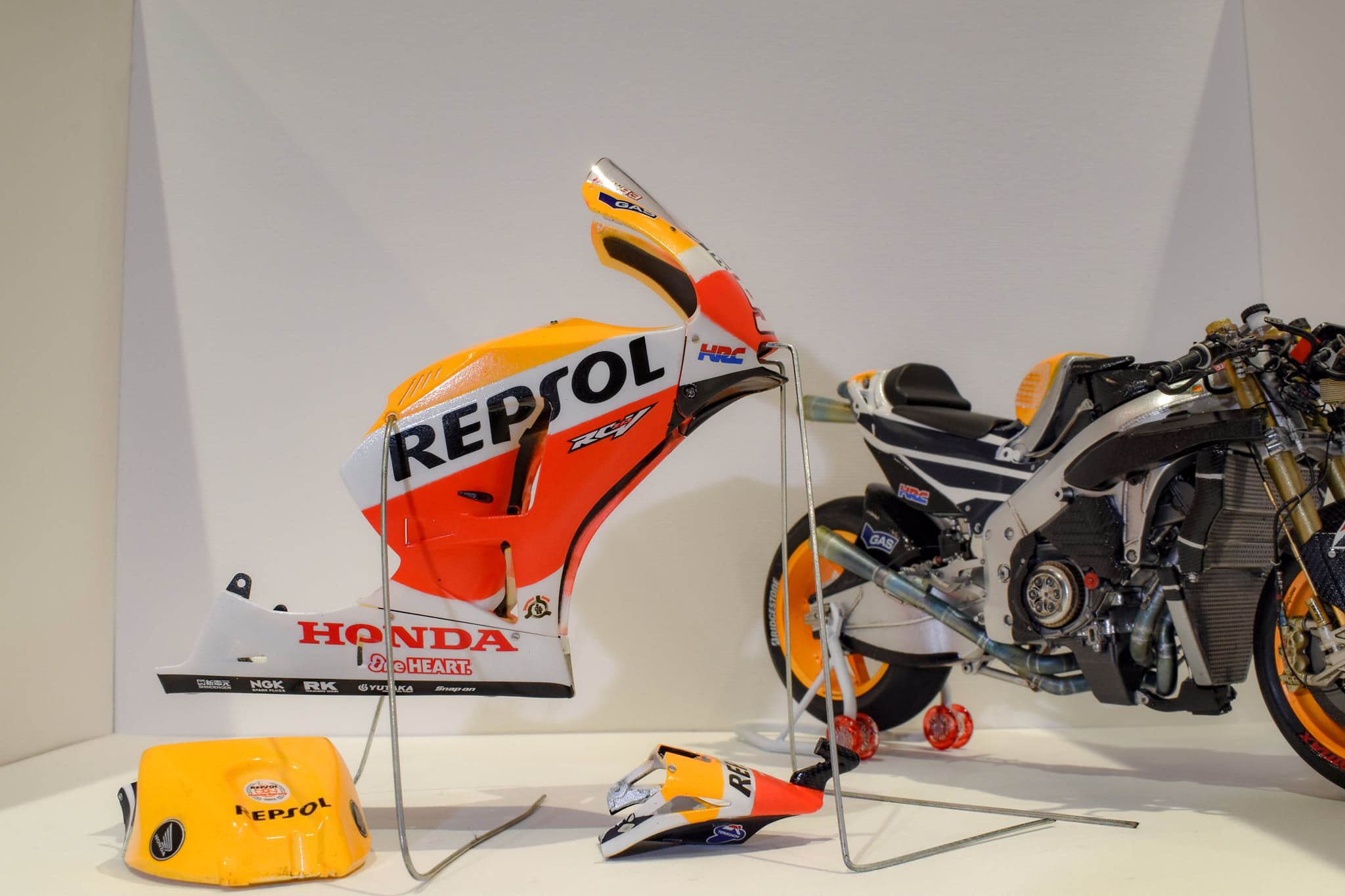 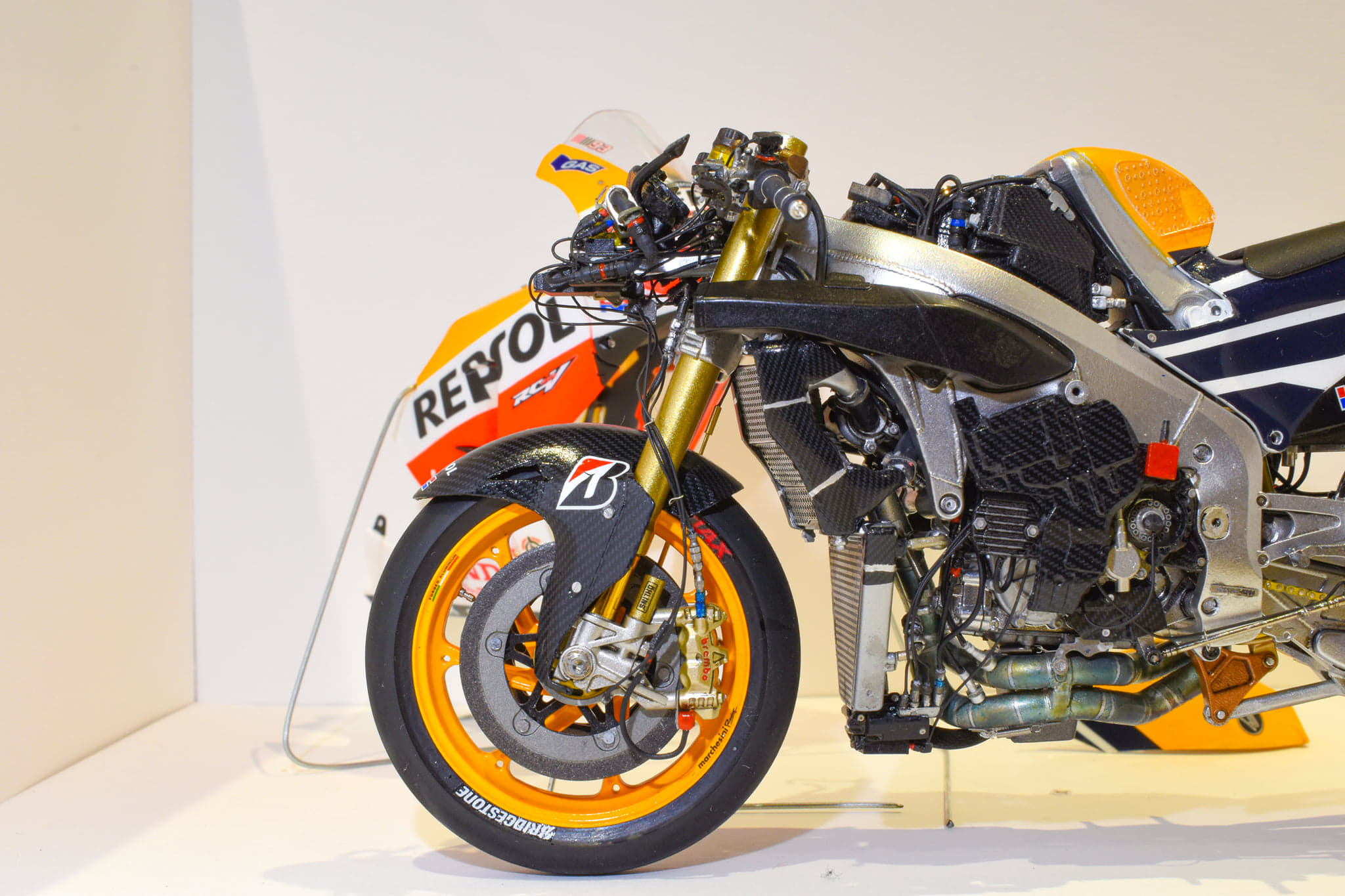 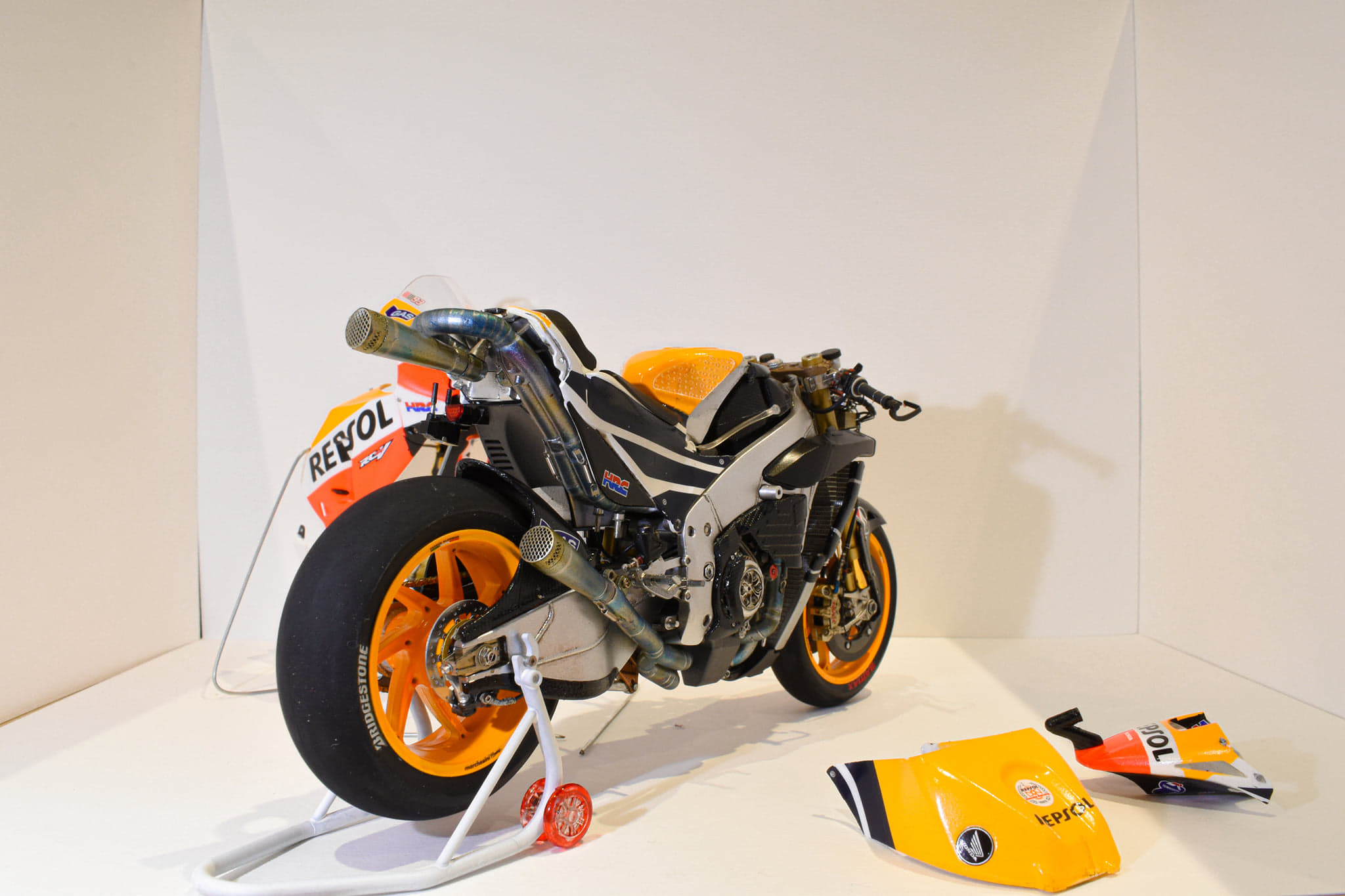 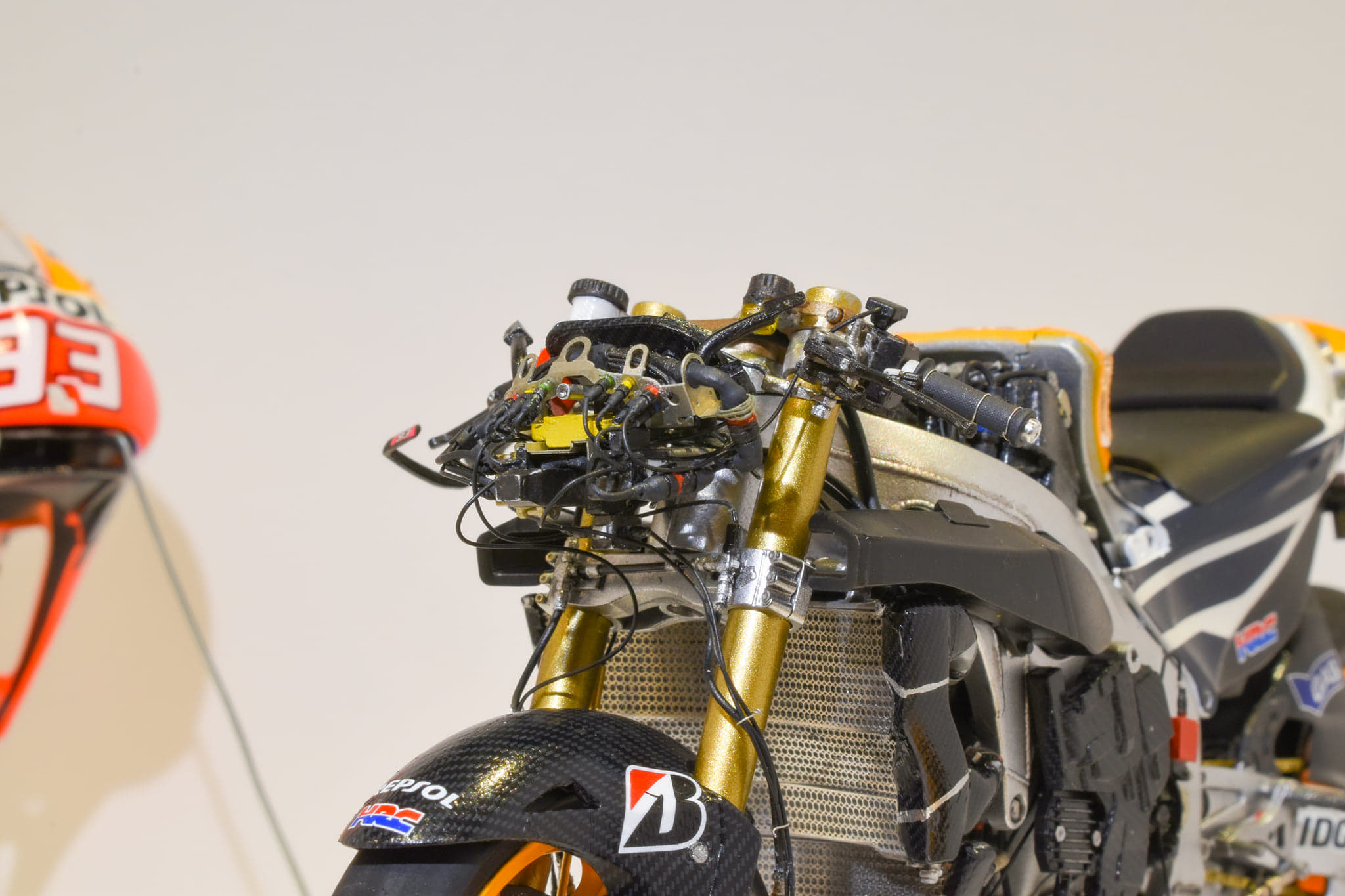 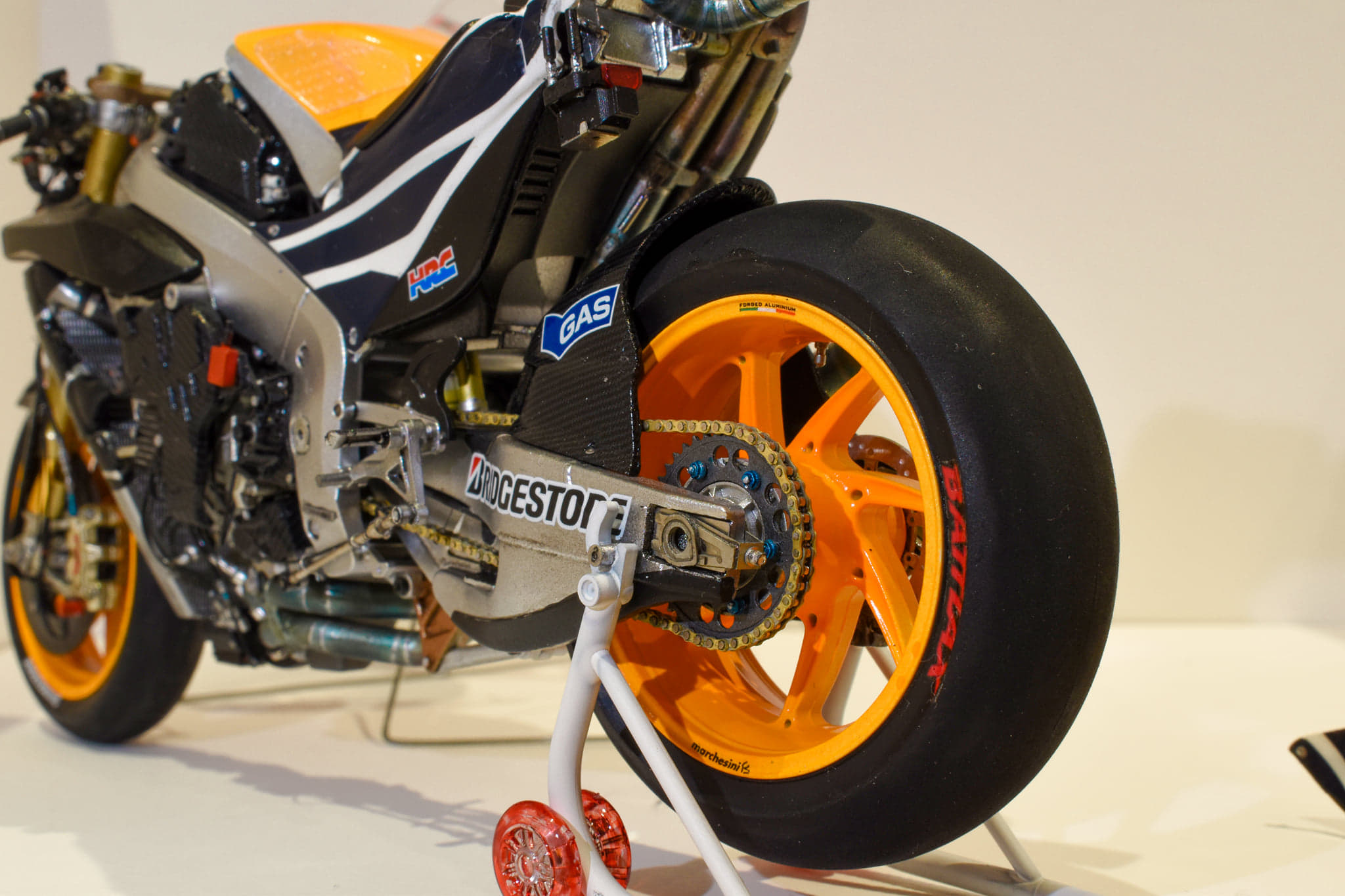 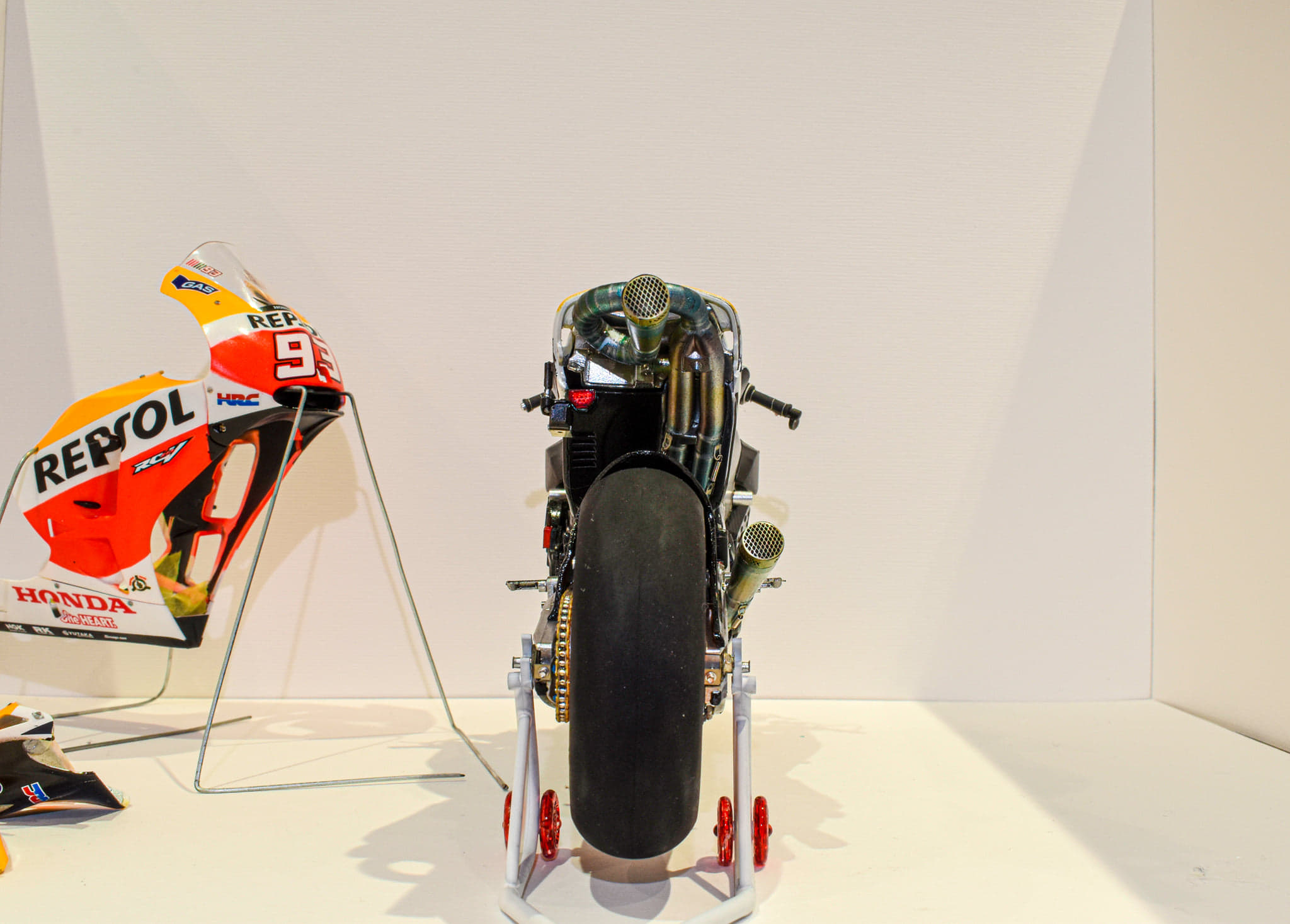 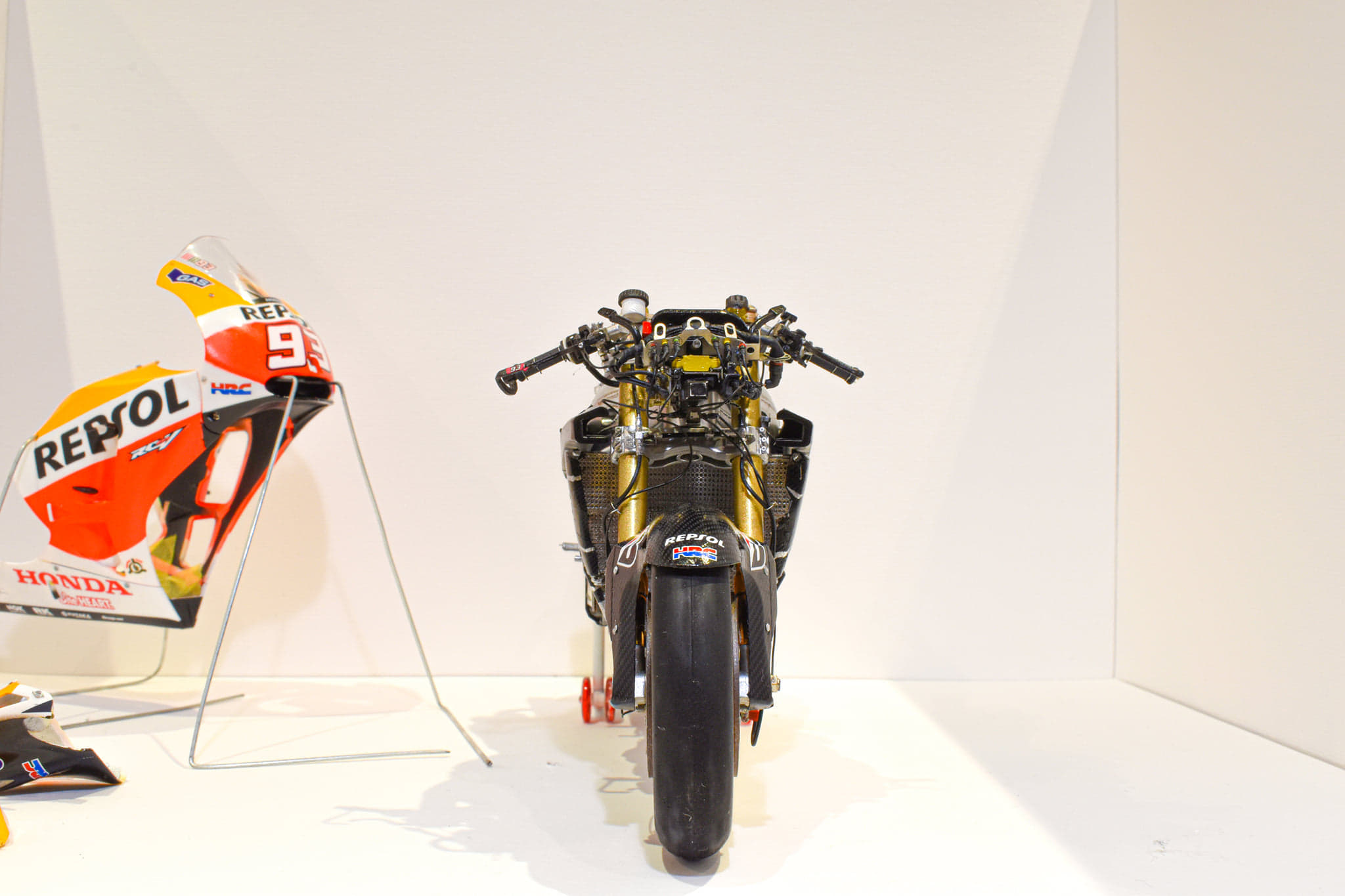 This was my 4th Model ever, it’s a 1/12 Tamiya RC213V. I used the Top Studio super detail set and Top Studio working chain set. I painted it using UMP primer, Zero Paints RC213V set and Alclad. I had issues with the Zero Paints fluorescent orange which destroyed a set of wheels, so I had to buy a new kit for the wheels. This meant I had lots of spares! It was a whole host of firsts for me, first time heat staining the exhaust with an airbrush, first time making the Top Studio chain set, first time I mixed paints for fork colour and various other bits. The build took about a month to complete and and although I’m happy with the result, I’d love to go back and redo it, haha! I started with the engine, which was brilliantly moulded and didn’t need much from the detail set. The one thing from the detail set that was a big difference was the clutch. It had a basket and individual plates. I used rocket CA glue to glue Photoetch details and Tamiya extra thin for the styrene. Next was the frame and swing arm. The frame had a few photoetch bolt heads, though for the swing arm, the chain adjusters needed to be cut off and sanded to make way for the photoetch chain adjusters. Then it was on to the forks and handles. The handlebars were 20 pieces in total, all small and fiddly! I couldn’t find a fork set when I purchased everything for the build, so I had to experiment mixing Tamiya paints to get a nice colour for the forks. The stanchions were done using some gold sticky back plastic foil. Then it was on to the exhausts, wheels and airbox. The exhausts were painted in titanium silver, then I used some strips of thin masking tape to mask the weld seams and hit it with very very thin clear blue, clear orange and a mix of clear yellow and orange. The wheels at first, came out terrible. The Zero Paints are very thin and hot. I’ve found you need to use lots of very thin coats. I may have went a but thick on one coat, or didn’t leave it long enough between coats because the plastic crazed and broke. I bought a new kit and tried again and they came out lovely! Then came the monumental task of wiring the bike up. There were so many plugs, wires and resin add-ons. This, I believe took the longest. The wiring was a little hard to route, it was a case of bending wires to the approximate shape, taking them off, bending more, then trying again until they were sitting right. Lastly was the fairings, which I decided to display off the model since there was so much going on underneath! The Tamiya masking set was not ore cut, but once cut worked well. The decals were thin and had a tendency to rip if moved too much, but I had spares and any things I could be fixed were touched up with paint. Thanks for reading! Luke Ward, South Wales.