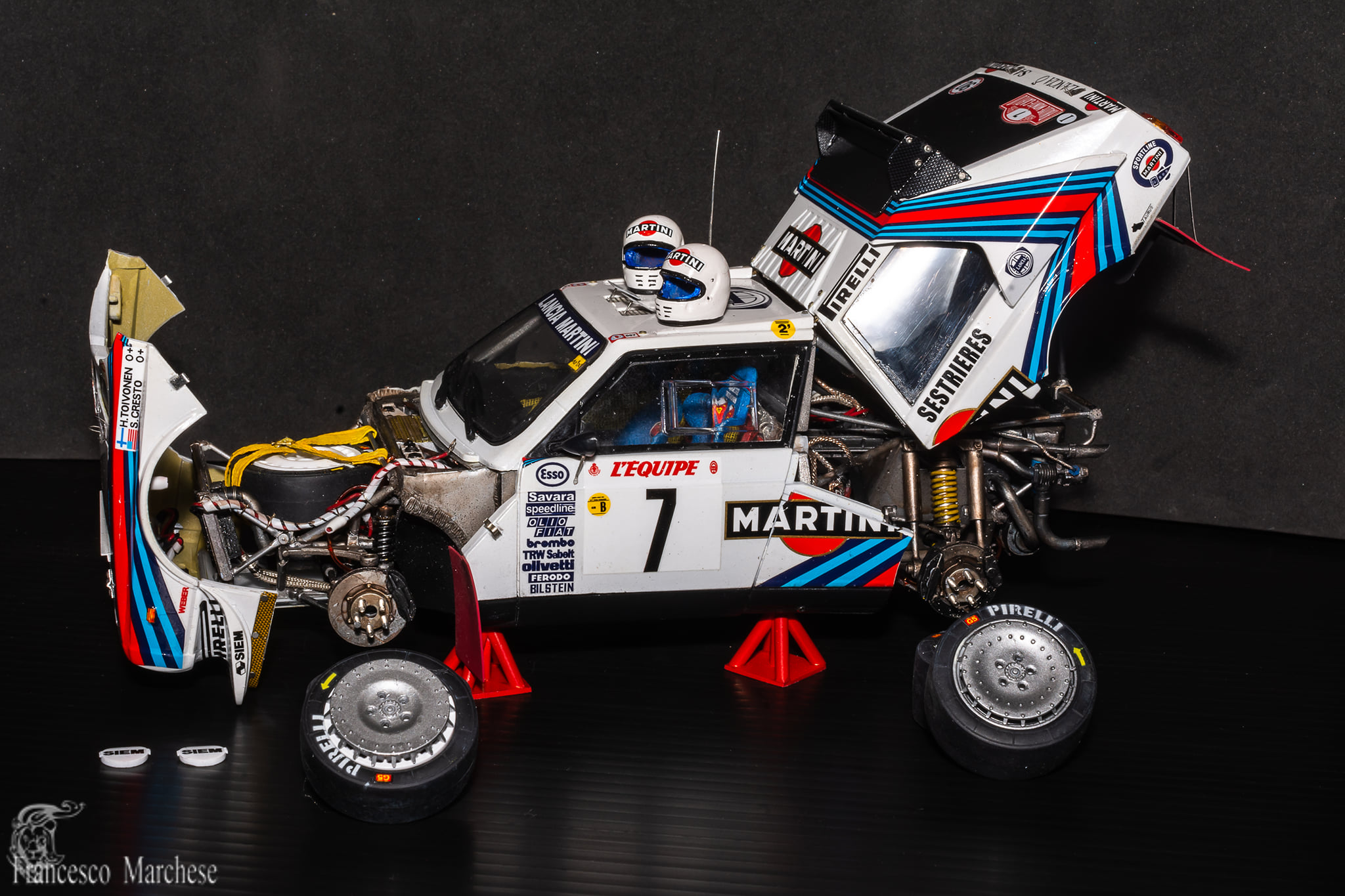 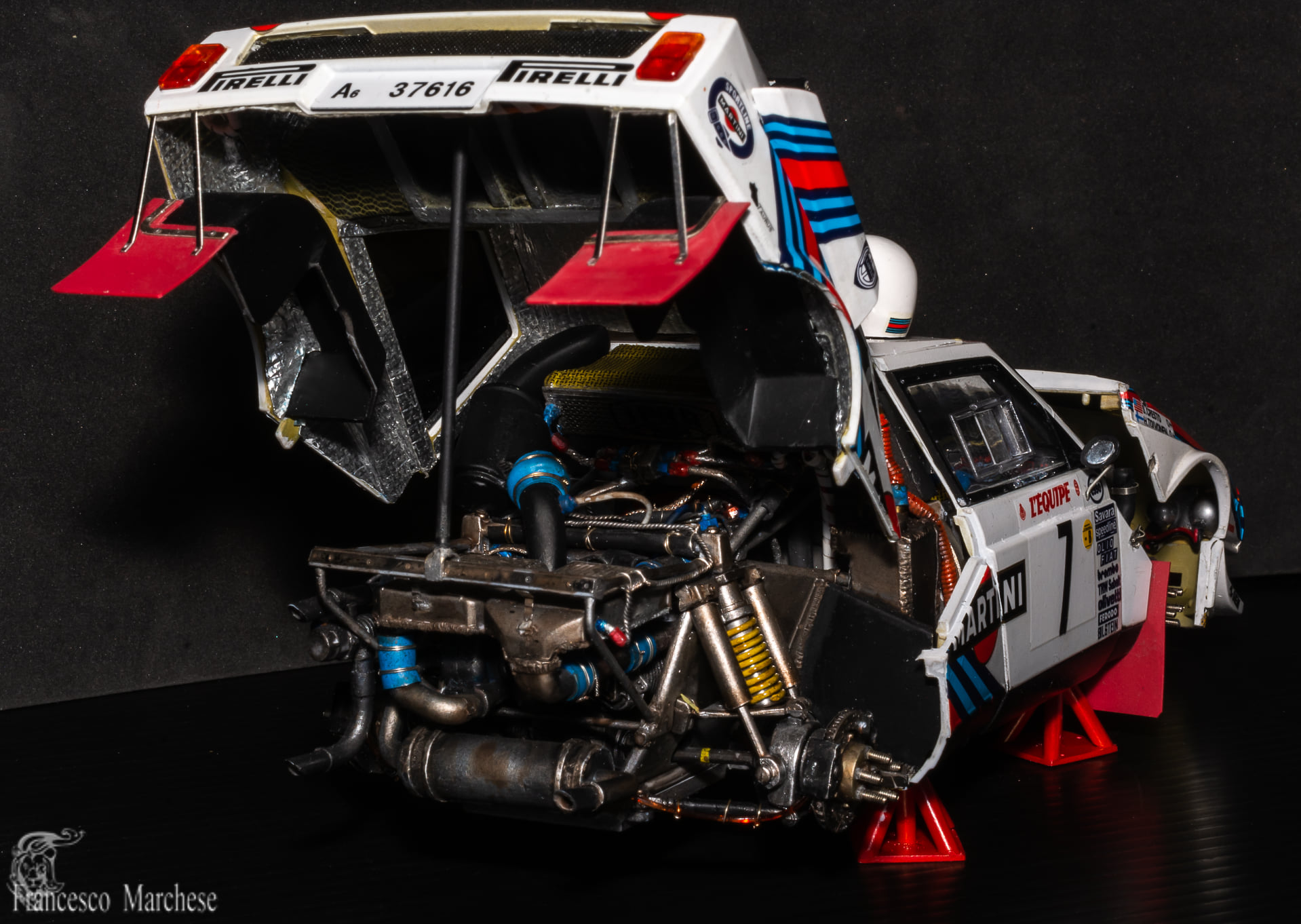 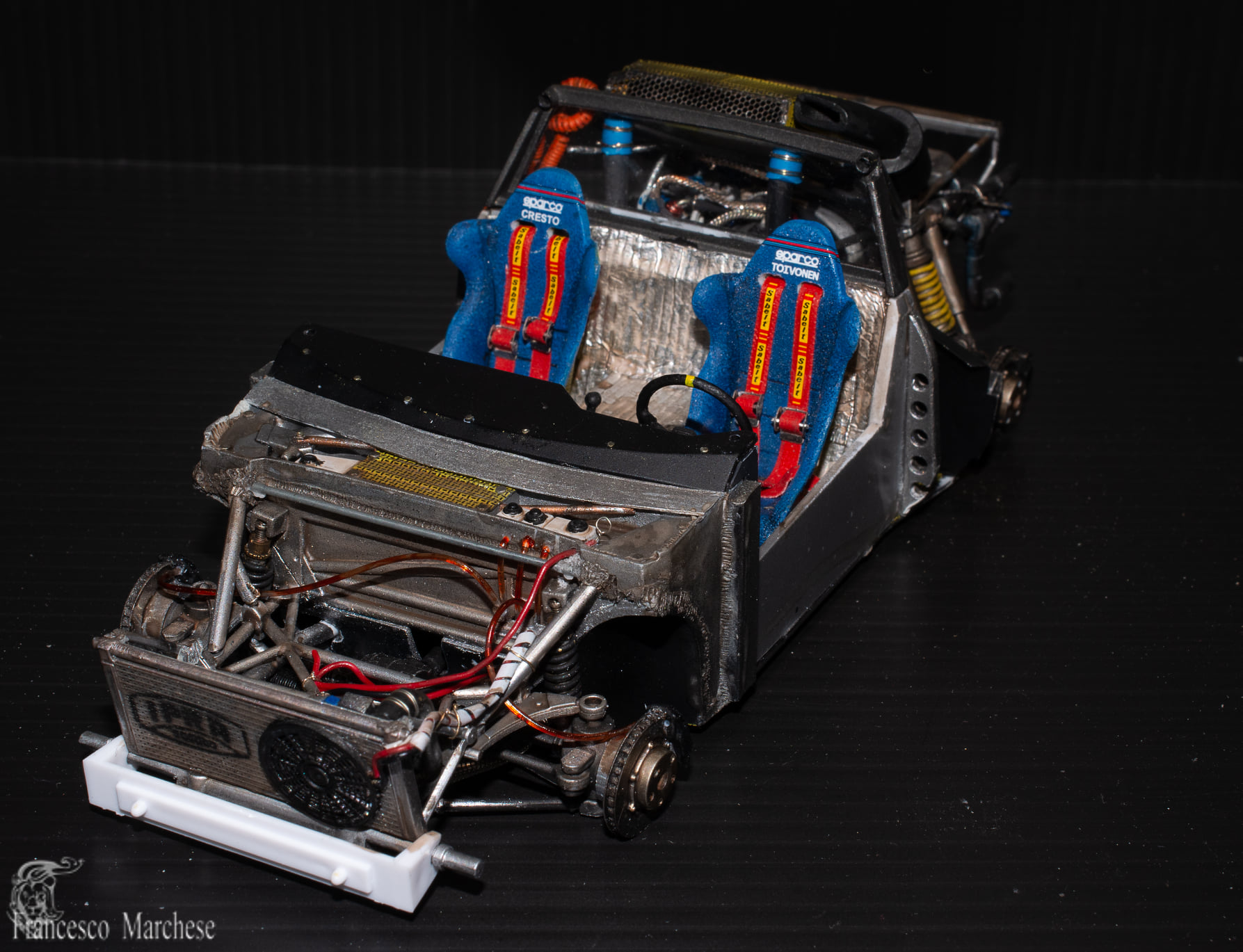 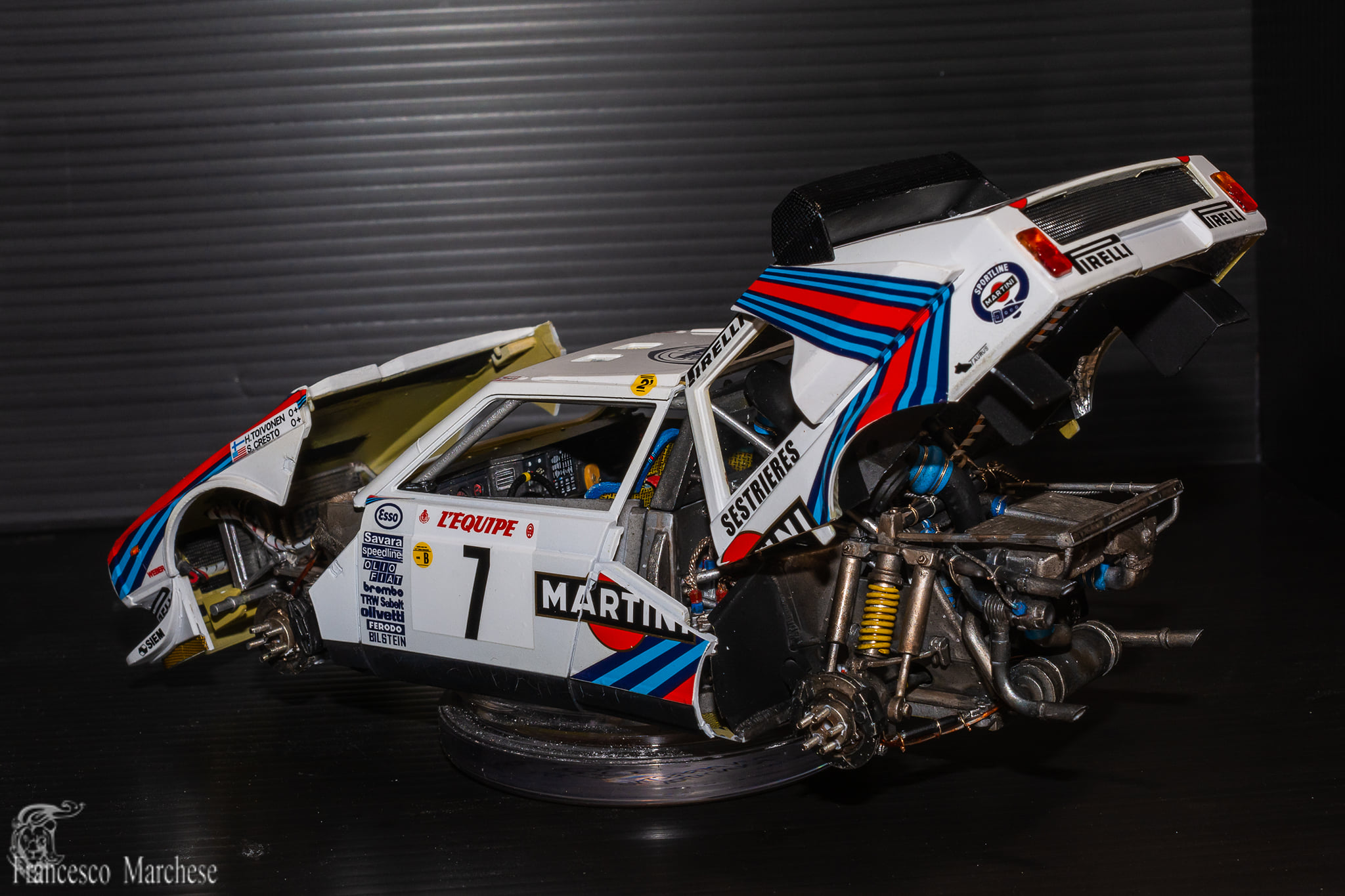 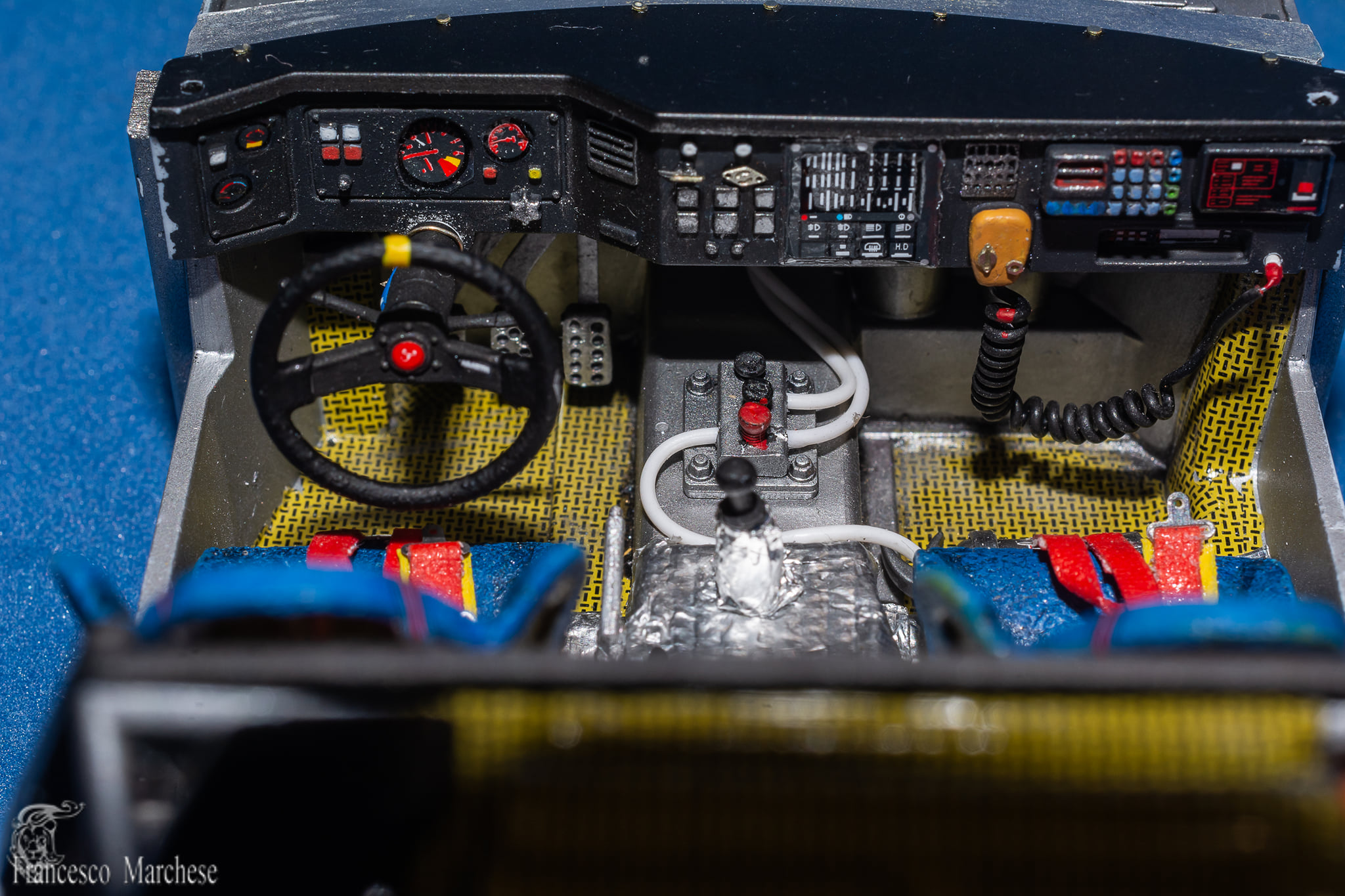 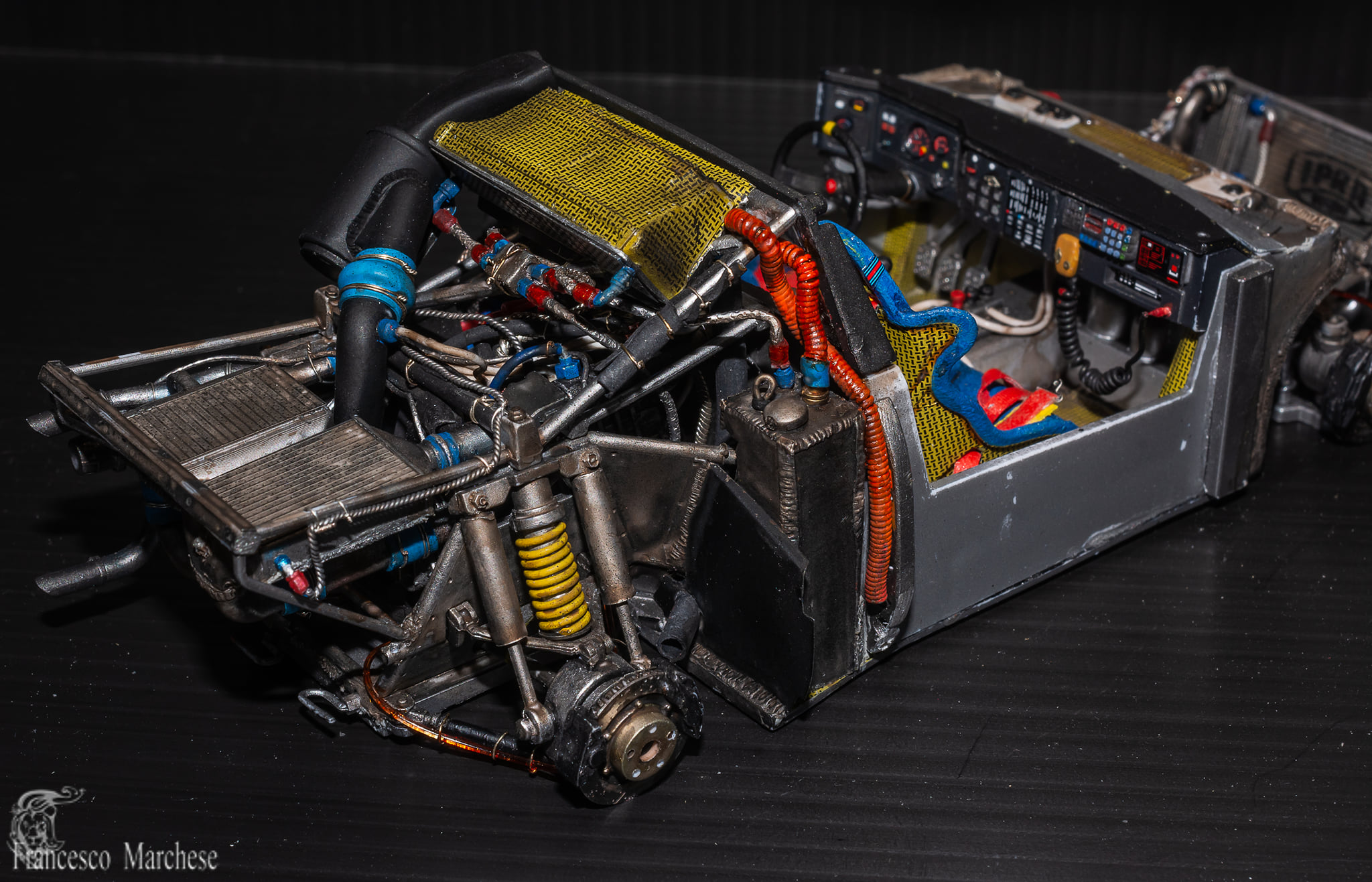 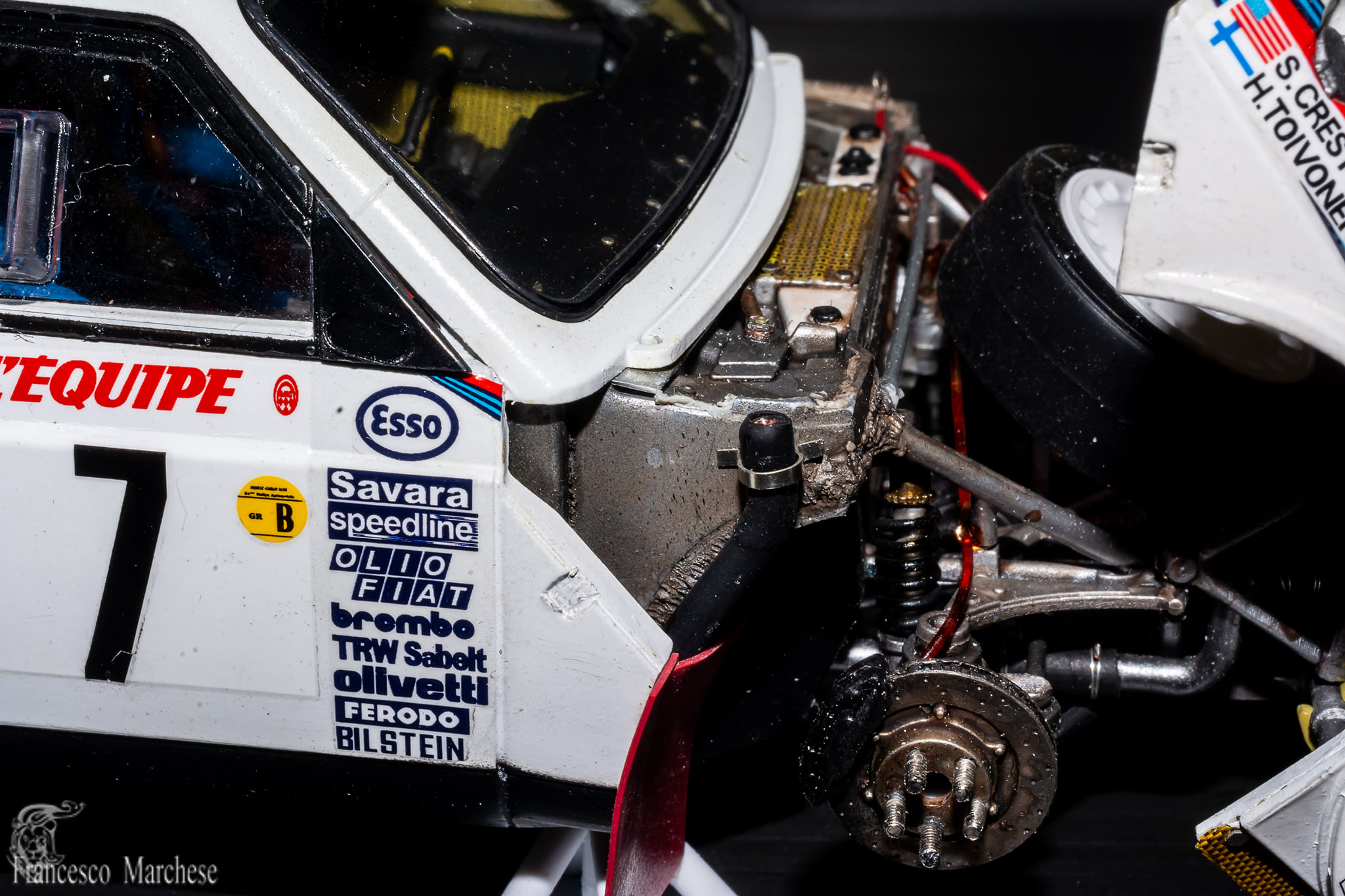 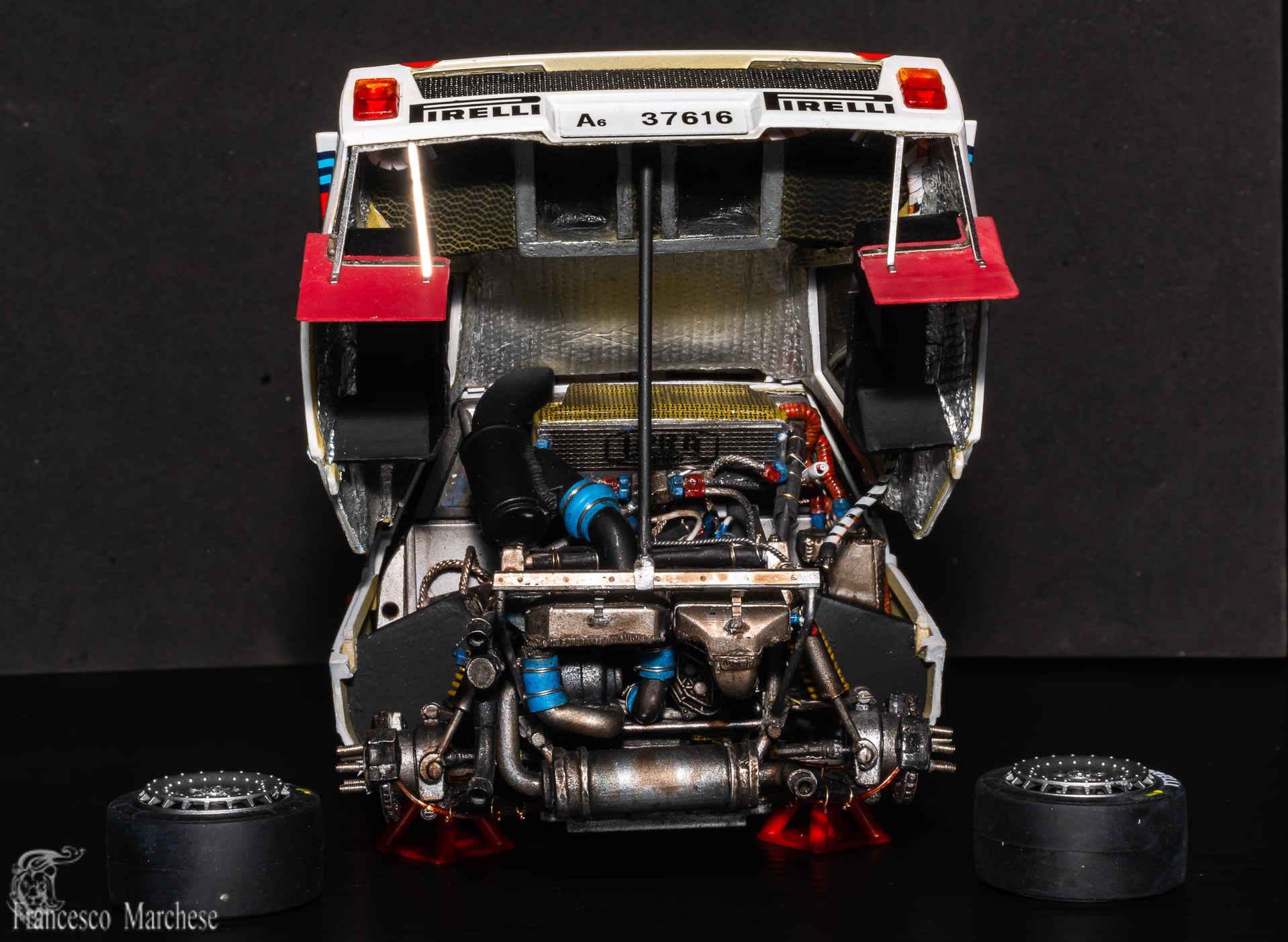 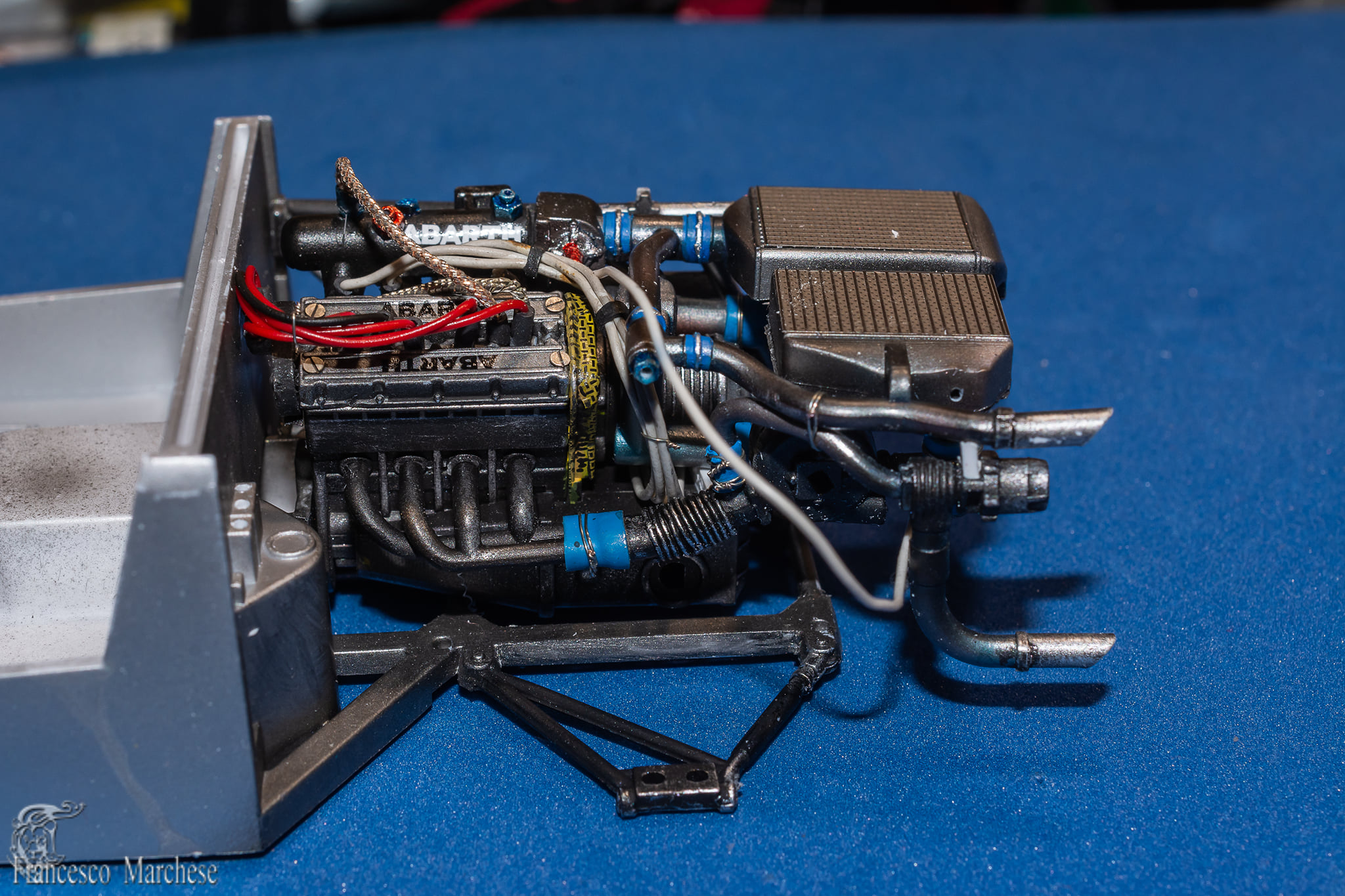 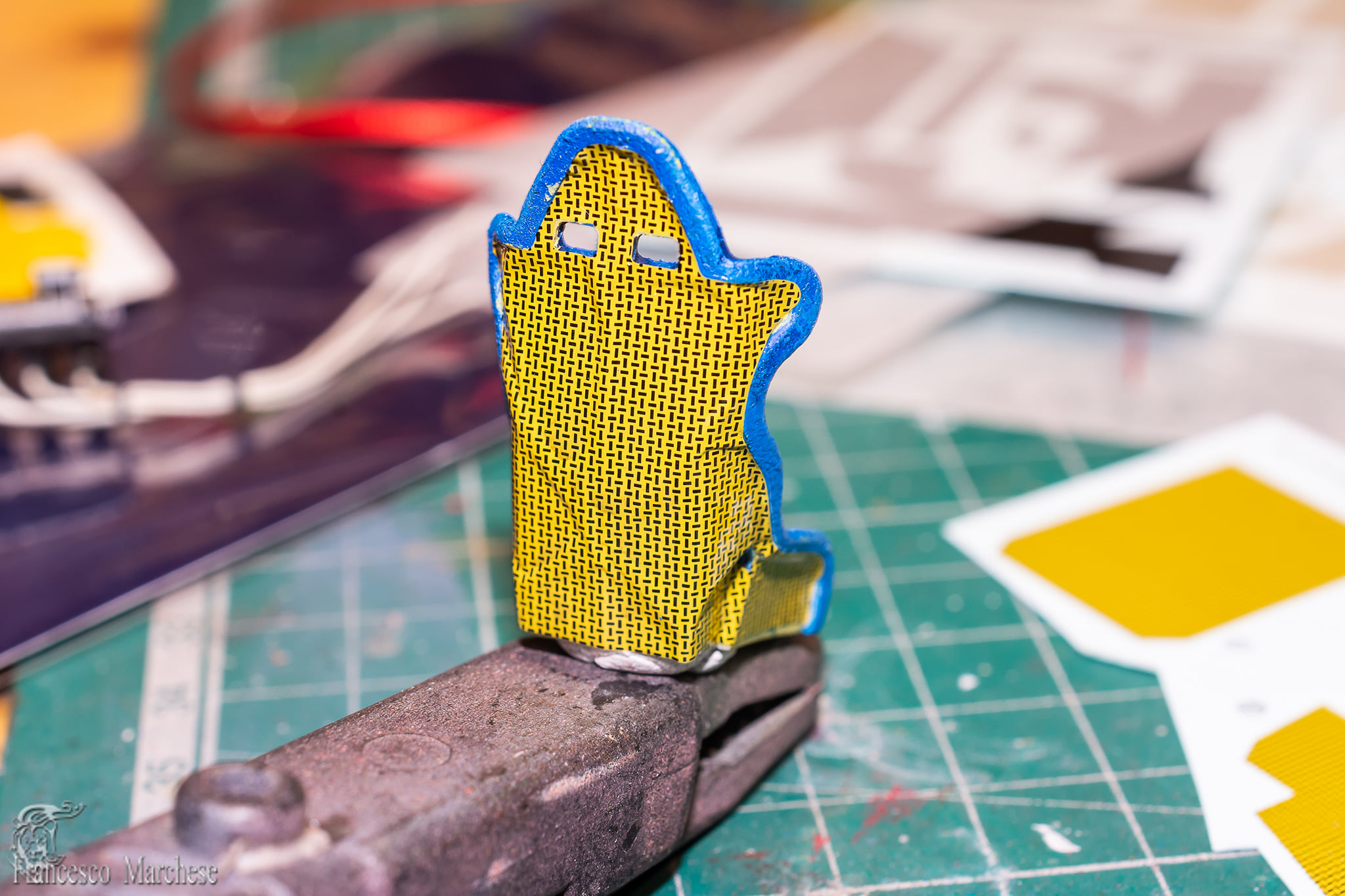 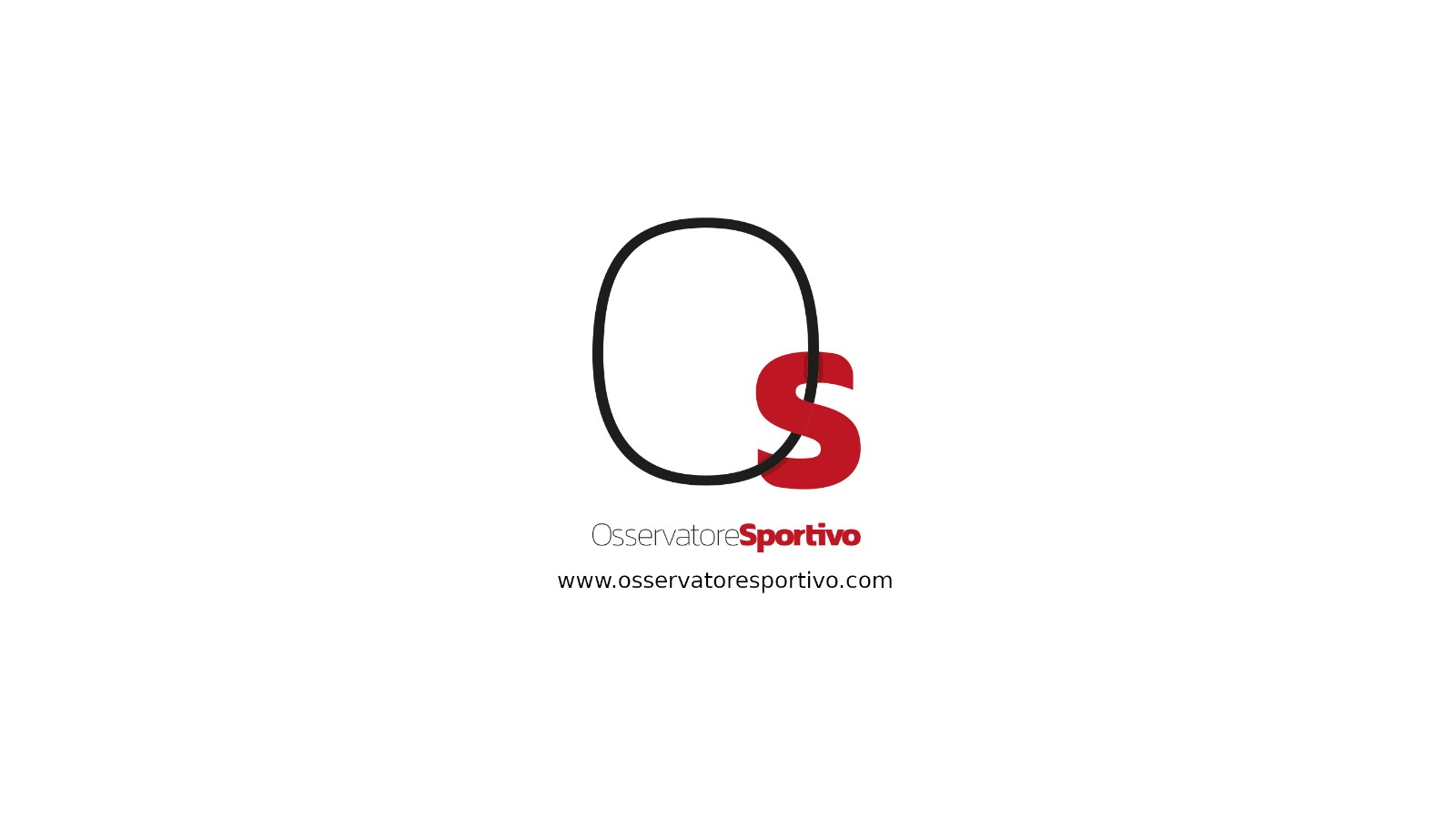 The Delta s4 kit is from the Aoshimi brand, a well made kit with beautiful moldings and with a body practically free from processing scraps. It is one of the few kits designed for a deluxe version, integrating various kits of photoengraved or resin parts from other brands of components. I obviously bought not one but two transkits to make the model a piece worthy of the name and to pay homage to two people who lost their lives in that car.
The additional kit of photoengraving, several photo-etched metal sheets that detail belts, radiator grilles, clamps, wipers and many other very small parts in a maniacal way, components that once the model is assembled only the most experienced will notice. Other details have been added during construction.
After the normal moment of fear for the quantity of parts to be assembled (by eye there are more than a thousand) .. off we go, as always.
Rear suspensions I start from the rear suspension group, which are absolutely unrealistic, then I decide to redo them, modifying the stems of the two parts of the suspension group, redoing the spring and making it with 0.7 mm diameter copper and compressed asymmetrically, exactly as in reality. Used 2 mm aluminum rods and embedded in the suspensions.
I then added the two photoengraved brake discs, Four pieces for each disc. The support structure has been painted aluminum color with Alclad paints on a black base, to give an appearance and a finish similar to welded steel. The result is absolutely realistic. The seats, an important part of the vehicle and nerve center for observation .. Realized in reality with a Kevlar structure, and padded in the front. The kit has two seats without embossing, so once they have been cleaned of the mold marks, I have, on the entire surface, buffered some stucco soaked in acetone. The result is a very realistic seat texture. The two seats were then painted in light blue, the darker areas are highlighted in the folds, again made with airbrush and blue inks. In this way the various areas stand out.
In the back I applied a decal simulating Kevlar, suitably soiled in the textures. In completing the seats added to the photo-etched seat belts, using a normal electrician’s tape. This makes the texture of the tape very similar to the real one. The belts, as in reality, are built following the various steps in the buckles and really “pull” protecting the driver’s body.
Sabelt brand belts that are part of my belts collection. All the parts making up the engine positioned and already painted to be assembled. Modified turbines, radiators with photo-etched grilles, exhaust manifolds, air intake manifolds, pipes, fittings …
The engine is being set up, I inserted the turbine, the spark plug cables, the coolant delivery pipes with the blue connection clamp already engaged. I used a blue heat shrink tubing heated directly on the pipes and “clamped” with two metal clamps of 0.5mm size. Engine mounted but not aged yet. Note the spark plug cables, the armored cables of the coolants, the sensor cables of the intake manifolds, the coupling with the turbine. The crankcase was covered with a kevlar decal
Engine assembly tests inside the engine cradle. An interlocking game between brackets, intake manifolds, exchangers, air filter painted yellow (it will then be completed with the fittings and armored cables).