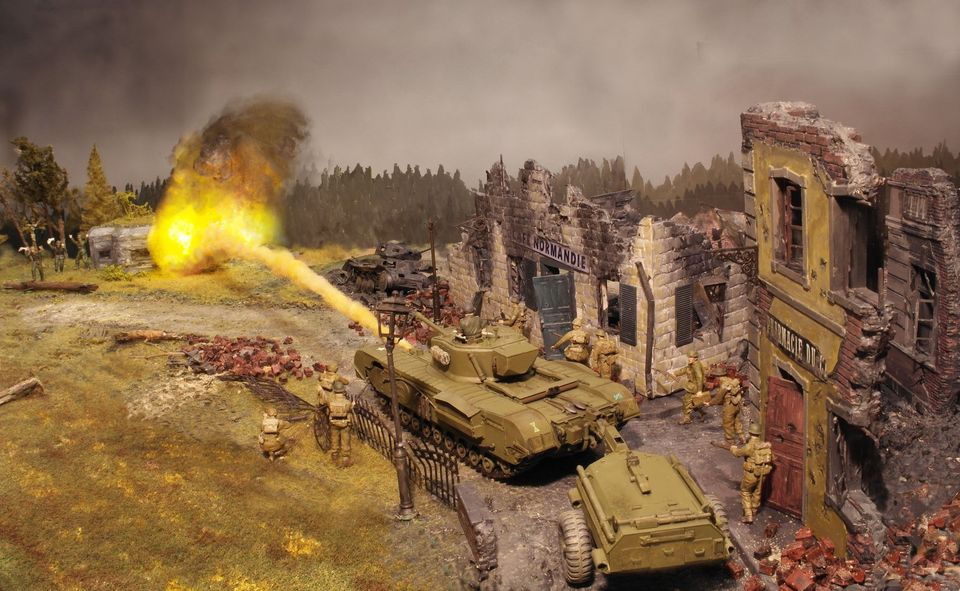 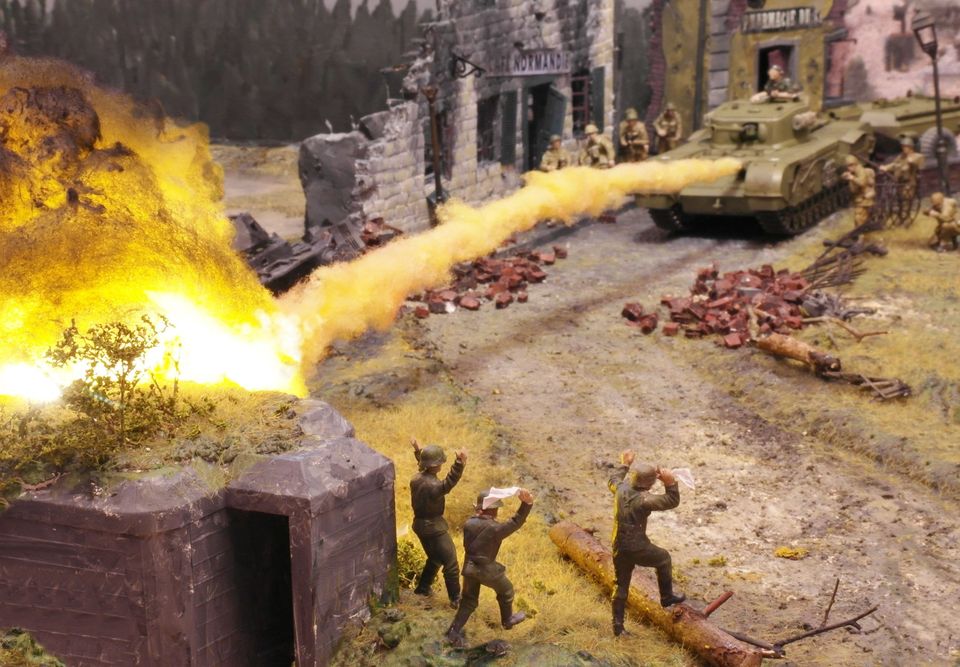 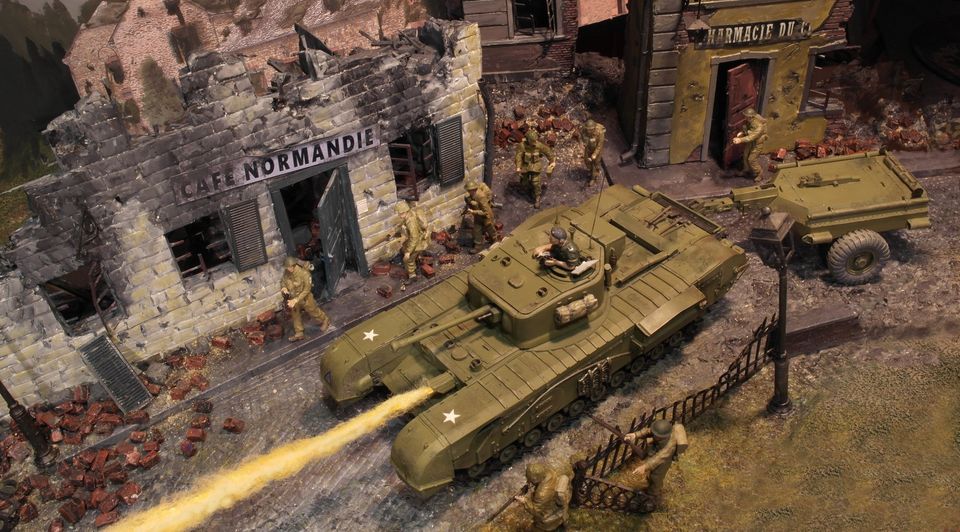 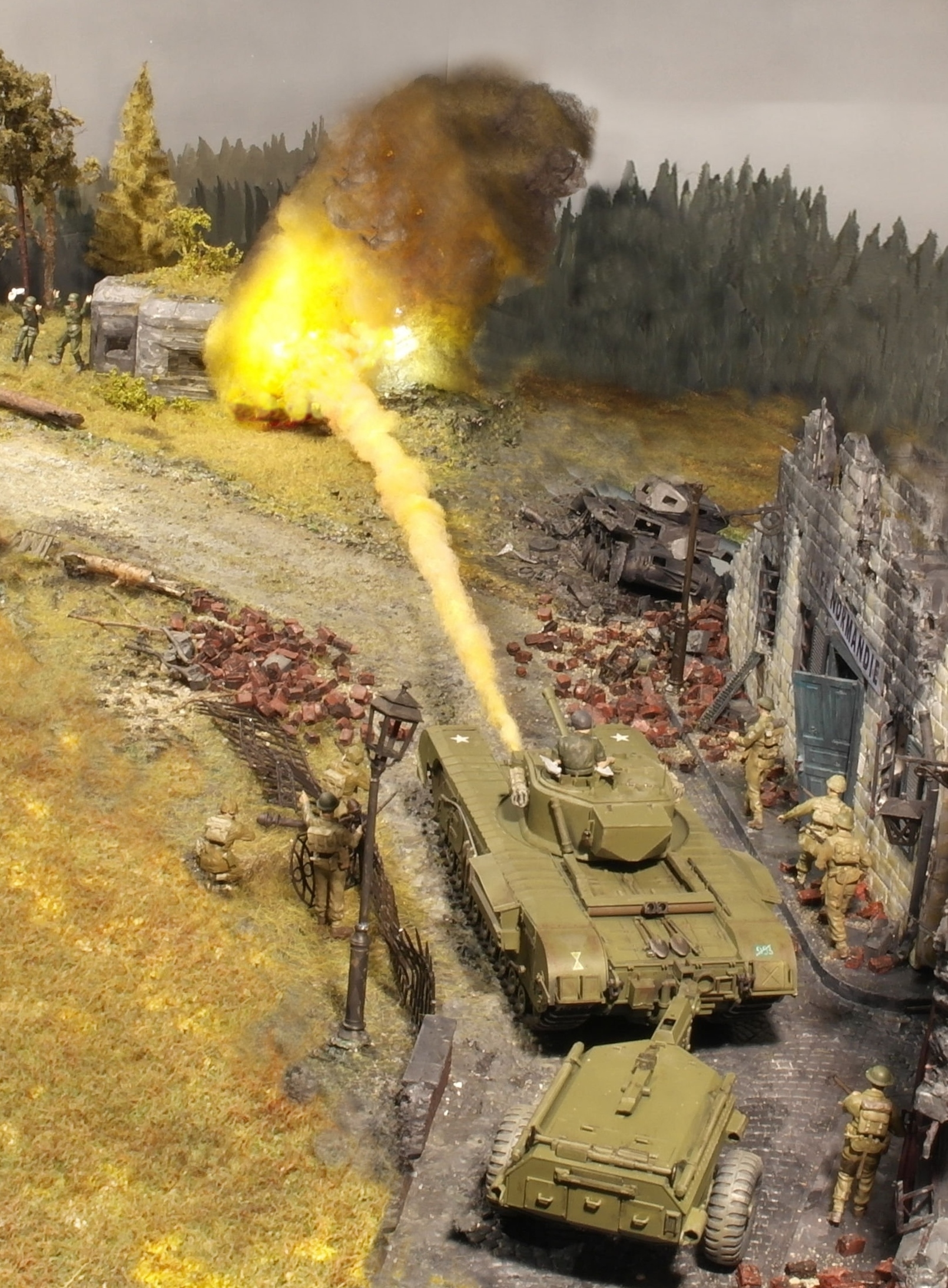 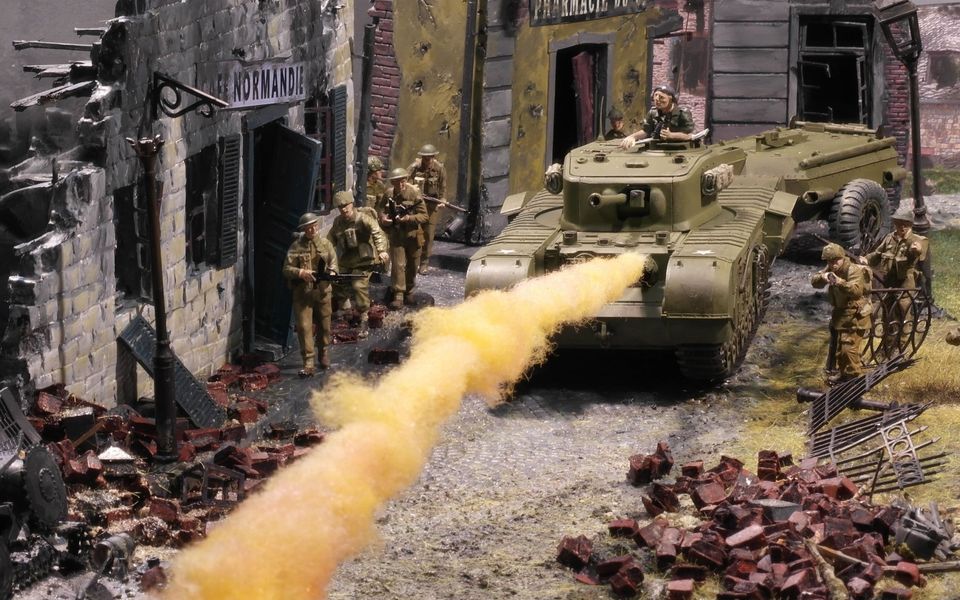 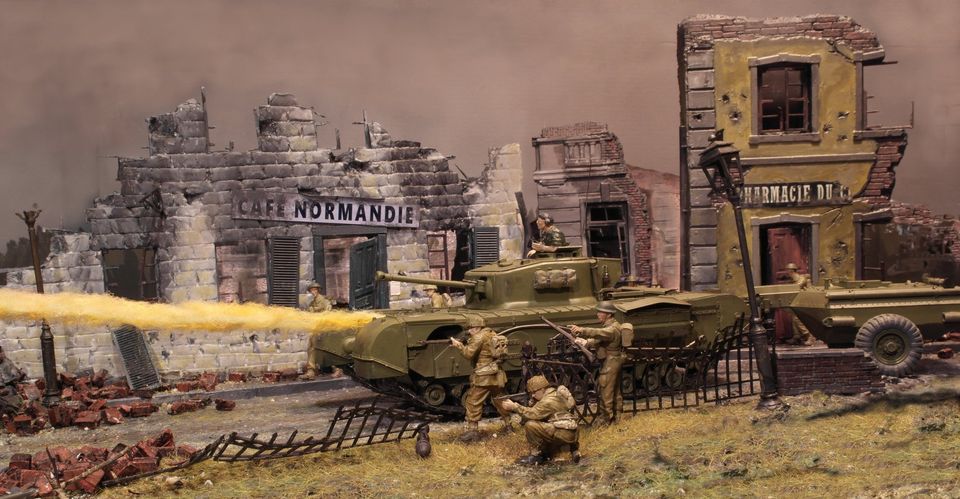 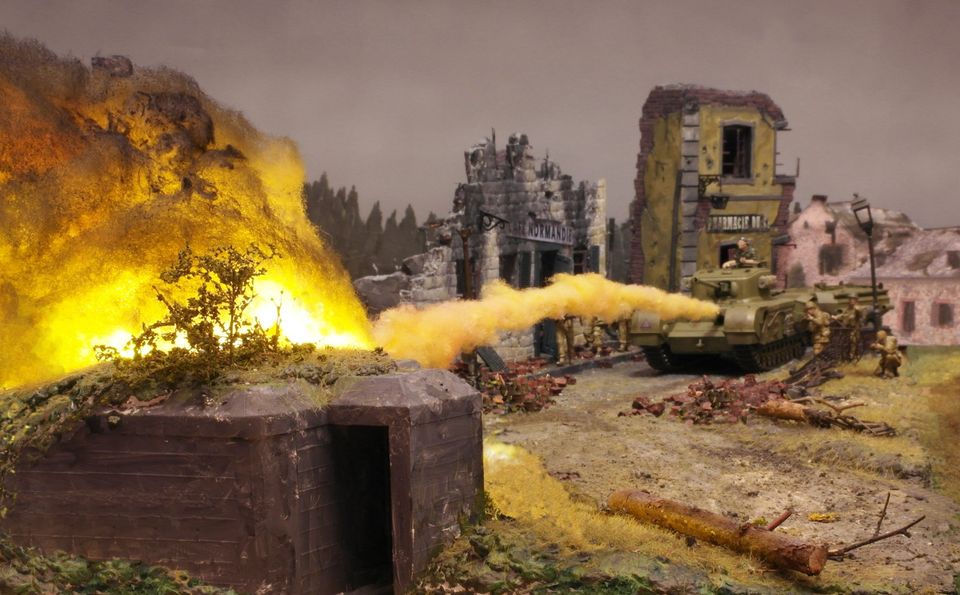 The British Churchill Crocodile flamethrower tank could throw it’s burning fuel up to 150 yards (137 m), though 80 – 100 yards (73 – 91 m) was more realistic in combat circumstances.The tank was towing a six and a half ton; armoured trailer which carried 400 imperial gallons (1,800 l) of fuel as well as compressed nitrogen propellant.The flame-gun had to be ‘pressured up’ before by turning on the gas and unless it is used within 30 minutes most of the pressure leaks away.The Crocodile was not only a flamethrowing beast, but it was also able to function as a gun tank with its turret mounted 75 mm gun.The Crocodile was used in Europe under and after the Normandy invasion in 1944. It was an effective assault weapon whose threat could induce enemy troops to retreat or surrender after the first ranging shots.The Churchill Crocodile was often found at the very front of an advancing British column, serving as infantry-support. The flamethrower was one of the deadliest weapons in the British Army’s arsenal as they fought through Europe during the latter stages of the WWII.When facing a stubborn enemy bunker or position, the Crocodile would lay some flame in visual range to showcase its deadly breath.Should the position continue to stand, the accompanying AVRE (Armoured Vehicle Royal Engineers) would crack it open with a mortar round.The Crocodile would then proceed to cover the breached area in the flaming liquid which would then flow into the position and burn anyone inside to death.One can only imagine the dread felt by the Germans who were being stared down by the flaming nozzle of the Crocodile and the mortar of the AVRE.

The burned out tank

The diorama was built on a very long base, and I had to find ways to fill the gaps between the Crocodile and the bunker. I decided to place a burned-out tank next to the ruin of Cafè Normandie and used a German Panzerkampfwagen (Sd.Kfz.121) because this was a small tank which easily could fit into the scenery.The building of the tank was just to throw together the main parts, do some damages and add some debris out-side. Then everything was painted black/grey.

To make the British soldiers, I used a mix from theTamiya “British Troops” and the “British Paratroops” from Bronco.The German figures were made by some old figures in my scrap box.There was no one with the arms in the air, so I had to make some correction to get them the way I wanted.

The Crocodile spits out a solid jet of flame fuel, and I was planning on building the beam of fire with some kind of light inside.It had to be a long (60 cm / 24in) and thin ray, and I tried all the light sources I could think of; Fibre Optics, Fibre Cable, LED Wire, Neon Light, Car Flexible tube and LED Strips to mention some.It gave either too little light, or too much light, had a too large diameter or gave an interrupted light beam.In the end, I put the fancy stuff away and used the basic: A brass rod, some clear glue and some Kapok.Usually I would have used cotton, but this time I tried the Kapok, which was a pleasant acquaintance.It was easy to sculpt, easy to airbrush, and did not have the lumps which you often find in cotton.I used a hot glue gun to put some unevenness on the beam.The beam would therefore not include lights.But, in the end it looks like the real thing!

The village, at least the part shown in the diorama, was heavily damaged and the houses mostly in ruins.I decided to make at least one of the houses and used a 10mm foamboard to cut out the Café Normandie.The ruined Cafè was built by cutting the foamboard using a ruler and a sharp scalpel.The stone structure on the front was made by pressing a metal rod against the surface.Window frames, window gaskets, shutters and gutters were ma-de of bits and pieces from my scrap box.The café sign was printed on my printer and glued on the façade.Bits from foam- and cardboard made all the rubbish (bricks etc.)The other house, the Pharmacie du Centre, was made of a kit from MiniArt.Most of the accessories (lamp post, fences etc.) were made from the kit “House Accessories” from MiniArt

Please note: Too close to the bunker

The length of the burning beam from the Crocodile to the bunker is unrealistic short which means the Croc is dangerously close to the German bunker.In the diorama, the flames from the Croc is 60cm (24in) which means 21m (70ft) in a 1/35 scale.The Crocodile would never have got that close to a manned German bunker because, at this distance, the Germans would easily have knocked the Crocodile out with a Panzerfaust (man-portable anti-tank recoilless gun)The Crocodile could throw the burning fuel up to 137 meters (150 yards), but the practical range in a battle situation would be between 73 – 91 meters (80 – 100 yards). This means that if I had made an authentic diorama, the base would have been about three meters long, the action would have been more orless non-existent, and the Germans would probably not have surrendered.

The diorama was built on a 110 x 40 cm (44 x 16 in) OSB board.I thought that would be big enough, but in the end, I had to add 15cm (6 in) behind the bunker, so I ended up with a 125 x 40 cm (50 x 16in) diorama.The first I did was to place the prop on the OSB board and draw the ground plan. Then I sculpted the terrain with Paper Mache, glued the buildings and the other props in place and painted everything with acrylic.I needed some grass, bushes and trees to make the terrain more natural. The grass was made by using the applicator for electrostatic grass. A 9V battery operates the applicator.By pouring clear glue on the ground,placing nails in the wooden board andconnection the nails with the 9V battery in the applicator, the grass that is sprinkled over the ground will stand straight up in the glue thanks to the electrostatic effect.Very easy and very efficient.

The Bunker The bunker was made of foam- and cardboard. It was half buried in the terrain and therefore a somewhat easy construc-tion. The idea was that the Crocodile should spray the first shot of burning fuel next to the bunker to show what awaited them if they stayed in the bunker.The German knew exactly what a terrible weapon the Crocodile was and did the sensible: Running out waving a white fabric. To the right of the bunker, I made a sup-port for the burning beam from the Crocodile. The clear rod out of the bunker is to test the position of the burning beam

The background was painted on a cardboard.I made the sky overclouded and dark; this was after all a war scenario, and the and the atmosphere should be a little gloomy.Between the background and the village,I placed pictures of a couple of houses to make depth to the village scene.

Too many: see the ideation